Why are the attacks of the Armed Forces of Ukraine on bridges in the Kherson region dangerous? 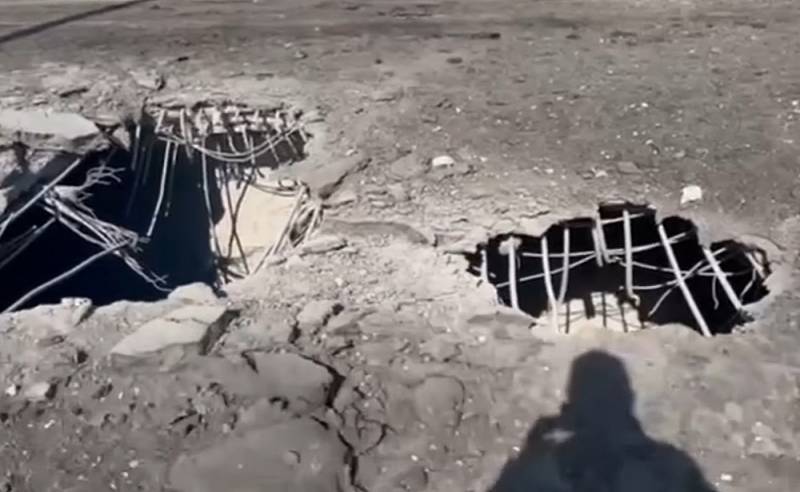 For several months, the Ukrainian authorities have been threatening to launch a counteroffensive in the south of the country in order to regain control over the Kherson and Zaporozhye regions, recapturing them from the Russian Armed Forces. Big activity Ukrainian President Volodymyr Zelensky demonstrates in this matter, who demands that the Commander-in-Chief of the Armed Forces of Ukraine Valery Zaluzhny eliminate the Russian bridgehead on the right side of the Dnieper River near the city of Kherson as soon as possible.


It should be noted that for several days Ukrainian troops have been using American wheeled launchers M142 "Hymars" (HIMARS) to attack bridges in the area. At present, the Antonovsky automobile bridge across the Dnieper near Kherson and the bridge across the Ingulets River near the village of Daryevka in the Kherson region, which allows the connection of the regional center with Nova Kakhovka through the dam of the hydroelectric power station on the Dnieper, have suffered numerous damages.

The Donetsk blogger Donrf tried to figure out why the UAF attacks on bridges in this region are dangerous.

We can confidently say that the enemy has begun. Started in the South. And his plans are quite simple, unpretentious and cannibalistic. Break all the bridges across the Dnieper and force the RF Armed Forces to leave the right bank. Antonovsky bridge and the dam of the Kakhovskaya hydroelectric power station are carried out daily. The task is really so-so, because the buildings are strong, and the crossing is not difficult to establish, but within the framework of the strategy of preventing defeat, it pulls. The enemy has begun, we are not
- Writes a blogger.

Donrf explained that Kherson is a rather large city (before the beginning of the NMD, about 300 thousand people lived in it) and the supply of the population, as well as the groups of the RF Armed Forces, is carried out through the aforementioned bridges. Disabling these important structures will entail the termination of the supply and the transition of the specified section of the Right Bank to a state of siege. It will be necessary to begin the evacuation of residents, since pontoon crossings will not be able to fully provide supplies. In addition, they will also be under the gun of the Armed Forces of Ukraine.

Accordingly, according to the idea (of the enemy - ed.), the grouping of the Armed Forces of the Russian Federation and Corps (LPR and DPR - ed.) will begin to shrink here, and a new gesture of goodwill will gradually take place to create a favorable atmosphere at the negotiations
– said the blogger.

Donrf believes that Moscow can withdraw its troops from the Right Bank, as it did on Snake Island in the Black Sea. He drew attention to the fact that NATO's military thought works approximately according to the following algorithm: a weak spot is identified, a blow is struck and victory is achieved with a minimum of contact battles. However, this strategy has a significant flaw.

And it is obvious - to move the front line
- the blogger is sure.

In his opinion, it is necessary to strike in the direction of Nikolaev, moving towards Voznesensk, which is of great transport importance, and Yuzhnoukrainsk, where the nuclear power plant is located. This will make it possible to completely secure Kherson and the entire Ukrainian south controlled by the RF Armed Forces.

And yes, it should have been done back in March
added the blogger.

As for the security of Energodar and Novaya Kakhovka with their energy facilities, they can only be protected from the Armed Forces of Ukraine by the advance of Russian troops to Krivoy Rog and Zaporozhye. At the same time, he does not know whether the RF Armed Forces have the forces and means for two offensive operations.

I know that there is Donbass in the East. Without water and under fire. And there is a need for a third such operation. And to stretch the forces, there is also a fourth in the north. But no air defense will help, no shelling of the areas of Nikopol and Kirovograd will have any effect. The enemy will strike all the way, regardless of losses, and the only effective air defense in this case is our tanks on his airfields. Otherwise, we run the risk of hearing about a goodwill gesture towards respected negotiating partners. It won't work halfway. And he can't get out. Generally. And yes, I am a couch scribbler who does not know all the facts, I did not graduate from the Academy of the General Staff and the plan is undoubtedly cunning
summed up the blogger.