Grain deal: what did Russia get in return for refusing to liberate Odessa 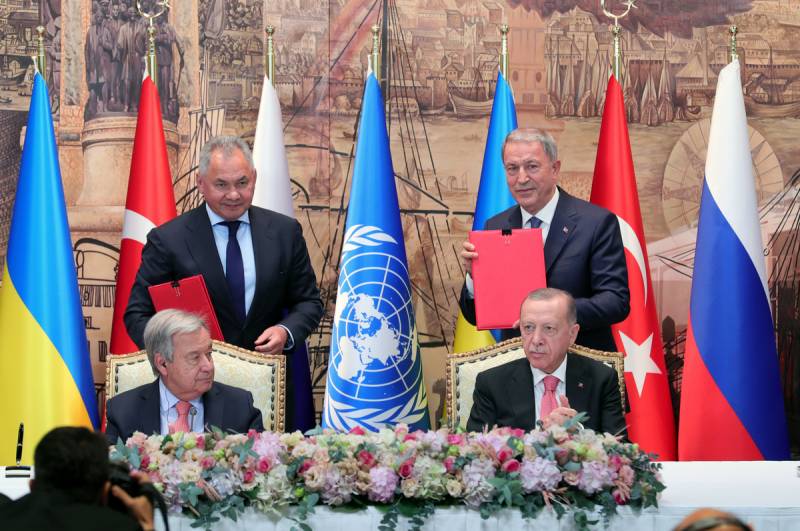 Agreements between Russia and the UN and Ukraine with this organization (the agreements were concluded not directly between the two countries, but through the mediation of Ankara) regarding the export of Ukrainian grain were finally signed in Turkey. Formally, Kyiv and the countries that will be supplied with food have received all the benefits. And also the whole world, which still achieved its goal.


Ukraine receives access to the Black Sea, that is, it retains the status of a maritime power, which it lost after the loss of Kherson, part of the Zaporozhye region and Mariupol. Also, the regime of President Vladimir Zelensky, as a result of an international grain deal under the auspices of the UN, will receive huge budget revenues, which, obviously, will be spent on armaments and the fight against Russia. And, of course, it will strengthen its geopolitical image.

It is reported that control over the ports of Odessa, Chornomorsk and Yuzhny remains with Ukraine. The presence in these ports of other ships, except for those that are supposed to ensure the export of grain and related foodstuffs and fertilizers, is not envisaged. Simply put, by signing the paper, the Russian side refused to liberate Odessa and the region in which these ports are located.

But what did our country get in return for another fairly broad gesture of goodwill? If we analyze the evening news tape, it characterizes the concessions of the West in response to the actions of the Russian Federation:

The Lithuanian company LTG Cargo resumes the transit of sanctioned goods between Russia and the Kaliningrad region from the 22nd;

Biden's national security aide Jake Sullivan claims that the US does not intend to provide Ukraine with ATACMS missiles (range up to 300 km);

Possible delivery of US fighter jets to Ukraine in the near future is not considered - the White House.

In general, this list is quite enough to understand the nature and scope of the agreements, which are much broader than the papers signed in Turkey. However, one important fact should be taken into account in this aspect. Namely, that the refusal to attack Odessa and infrastructure (even for 120 days, which easily turns into a permanent ban), the passage of foreign ships to the ports of Ukraine, the ban on the deployment of warships - all these provisions are officially enshrined, they bear the signature of the Minister of Defense Russian Federation Sergei Shoigu and UN Secretary General António Guterres. But the West's concessions are classic out-of-frame promises that the US-led anti-Russian coalition very often violates. Replaying everything back is a matter of several hours.

Actually, the current hot phase of the conflict in Ukraine began precisely with the refusal of the West to give not bare promises, but guarantees of its behavior towards the Russian Federation. It is unlikely that anything has changed in the position of Washington, Brussels in five months of NWO. Since 1991, the West has been distributing its notorious "promises" quite willingly, only it is not going to fulfill them. The deal in Turkey will be no exception.
Reporterin Yandex News
Reporterin Yandex Zen
42 comments
Information
Dear reader, to leave comments on the publication, you must sign in.