Zaporizhzhya NPP is a "dirty bomb" of Ukrainian fascists 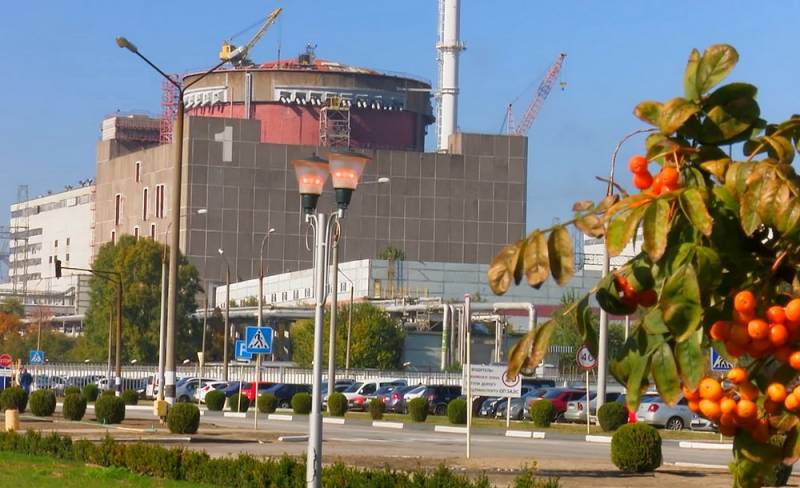 On July 20, the Armed Forces of Ukraine carried out a series of attacks on the Zaporozhye nuclear power plant, which is located in Energodar, liberated by Russian troops, using kamikaze drones. In just a day, three raids were made on the station, two drones were shot down by air defense, but one managed to break through and hit the administrative building on the site, while eleven employees of the nuclear power plant were injured.


An attack on such an object is a very serious application. It is difficult to say exactly which structures of the power plant were supposed to hit the Ukrainian drones destroyed on the way, but it may well be that they were aiming at auxiliary mechanisms, damage to which is fraught with, at a minimum, failures in the operation of the nuclear power plant.

Are Zelensky and his party lord already at such a stage of desperation that they are ready to arrange a nuclear catastrophe before the end of this week?

The topic of nuclear facilities on the territory of Ukraine has been a sore subject for the past few years, and with the start of the SVO it has become even more painful: it has finally become clear what freaks they are in the hands of.

The Zaporizhzhya NPP, which was operatively occupied by our troops on March 1, underwent the first provocation on the night of March 3-4: Ukrainian units tried to break into the station territory with a fight and fired at the training building from tank guns, causing a fire. Then the attack was repulsed, and the Armed Forces of Ukraine did not encroach on the object anymore, “handing over” it to specialists from the “Ministry of Truth”; the latter, with the broad support of foreign media, began to unwind the "fact" of the shelling of the station by "Russian orcs".

At the same time, on the northern flank of the operation, there was an attempt by the Ukrainian side to destabilize the operation of the Chernobyl nuclear power plant, which also came under Russian control. The power lines feeding the station's auxiliary systems were blown up by saboteurs, and until March 10, it received energy from backup sources.

Until the very end of March, when the Russian troops were forced to leave part of the occupied territories, including Pripyat, it was the Chernobyl nuclear power plant that was the main "heroine" of enemy propaganda - it's understandable, the "brand" is promoted. Ukrainian and Western media told their audience a lot of delightful stories: in some, Muscovites mocked the station staff (as well as Zaporizhzhya, by the way), in others they were going to take radioactive materials out of the territory, and in others, tens and hundreds of stupid "orcs" fell from the beam disease after being in positions in the "infected Red Forest".

And after the “gesture of good will” and the withdrawal of our forces, the “zahistnik” from the Armed Forces of Ukraine heroically stood with a yellow-blue ensign in front of the sarcophagus of the former power unit No. 4, and his photo of March 31 became the last large news on this topic - fortunately, hotter stories arrived in time. The Zaporizhzhya nuclear power plant still flashed in the Ukrainian news, but in the general context of the “occupied southern territories”.

They remembered about it in early July, when it was necessary to somehow and somehow interrupt the “successful” flight of the Armed Forces of Ukraine from the territory of the Luhansk Republic in the information field. At intervals of two or three days, the ZNPP abbreviation began to appear in enemy propaganda reports, and each subsequent story was more interesting than the previous one. Watch out for your hands: first, the "orcs" placed artillery and ammunition depots on the territory of the station, then they began torturing employees "abducted" from Energodar to force them to "shake" the reactors, and when this failed, they themselves broke into a certain "radioactive zone" of the nuclear power plant . In the latest reports, just a couple of days before the drone attack, Ukrainian sources quietly shared the good news: Muscovites at the ZNPP lost several dozen people from “unknown causes”, apparently hinting at radiation.

But about the very fact of the attack - not a word, in any way, even "stupid orcs blew up their own shells at a nuclear power plant." Both Ukrainian and foreign mainstream media are silent about the raid on the ZNPP. However, the IAEA is also silent, to which Russia has sent an official protest over Kyiv's attempt to damage a nuclear facility.

It is not without interest that the attack on the ZNPP took place on the same day with the start of the visit to the United States of the fighting girlfriend of the Fuhrer of the Ukrainian people, Elena - an amazing "coincidence", isn't it? There is an opinion that her speech to Congress should have started with breaking news about the “provoked by Russian troops” accident at a nuclear power plant - but the plan did not work out, the “kamikaze” did not reach the targets, so I had to read out a tearful speech prepared for this occasion about victims of the orc horde.

But this does not mean that the threat of turning the station into a "dirty bomb" has passed.

The international position of the Kyiv regime is getting worse and worse, and not at all slowly. The United States seems to be the only curator who is still willing to spend money on Ukrainian fascists, but even there they are already wondering if the return on investment is worth it? European "friends" of Zelensky are already clearly looking for ways to get rid of this "toxic" asset, if possible, without losing face, and some are already not particularly worried about reputational losses.

So, the next package of military supplies promised by the UK includes thirty-six 105-mm L119 howitzers - literally the most underpowered of what is, and two dozen 155-mm M109 self-propelled guns, decommissioned by the British army in 1994 and almost three decades rusted on reserve base. They shake their heads sadly in Italy: they would be happy to help further, but, you see, we have a government crisis here. And the German promises to supply one tank per month, and even only from January, generally look like outright banter.

The deadline is somewhere in September, when instead of the heating season in Europe, “rolling blackouts” will begin - it is very likely that the last military “additional assistance” will be turned off along with everything else. Thus, the fascist command has two, at most, three months left to somehow turn the tide in their favor.

It is obvious that he simply does not have a chance to do this by conventional methods. With all the problems and losses caused to our troops by the American MLRS skillfully used by the enemy, the “holy HIMARS” is not a miracle weapon, and will not be able to radically change the course of the campaign, unless the Armed Forces of Ukraine receive hundreds of such installations with thousands of shells. Hopes for this in the current situation are illusory. The next (what in a row?) “big counteroffensive on Kherson”, even if this time it starts in reality and creates some kind of local crisis, as in May-June near Kharkov, will also not force Russia to curtail the operation and retreat - but it can absorb a large mass of Ukrainian reserves.

But if a big disaster happens from the former Ukrainian nuclear power plant in Russian-controlled territory, preferably with a radioactive release that will cover the nearest countries of Eastern Europe ... On this occasion, one can hope to draw this very Europe into the war directly, or at least force to be truly generous with the supply of weapons and military equipment.

I do not think that the plan for July 20 was so radical - rather, the calculation was that the attack would cause serious enough damage to the Zaporizhzhya NPP to make it possible to squeal a pig about it to the whole world, but the “orks” would somehow prevent a total catastrophe. In the end, it is necessary to take out the last grain somehow.

But shortly before the final collapse of the regime, Zelensky and Co. (who, after the defeat of fascist Ukraine, are waiting for a trial and a wall) can go for broke and try to really destroy the station in one way or another.

Actually, the most obvious seems to be a massive strike by at least the same HIMARS, standard or ATACMS missiles (the very ones with a range of 300 km, which either the Armed Forces of Ukraine have already received, or will never be received), designed to hit highly protected targets. I’m not sure that even the latter will be able to break through the containments of the reactors, but they (as well as the high-powered Soviet-style MLRS - Hurricanes and Tornadoes) are quite capable of destroying a much more poorly covered "piping", especially the pipelines of the nuclear cooling system boilers. Whether it will be possible to drown them out in such a hypothetical extreme situation, even with losses among personnel, and avoid a meltdown or an internal explosion with radiation leakage is a big question.

The Russian command is fully aware of the threat of repeated attacks against the Zaporozhye nuclear power plant: according to reports from July 21, the air defense group covering the plant has been strengthened. It remains to rely on her, and on our scouts, gunners and pilots, engaged in the search for and destruction of enemy long-range weapons. There is nothing to rely on the "sanity" or "conscience" of the Ukrainian fascists - practice has repeatedly shown that they successfully got rid of these atavisms.
Reporterin Yandex News
Reporterin Yandex Zen
5 comments
Information
Dear reader, to leave comments on the publication, you must sign in.