Why Ukrainian-Russian nuclear war is quite real 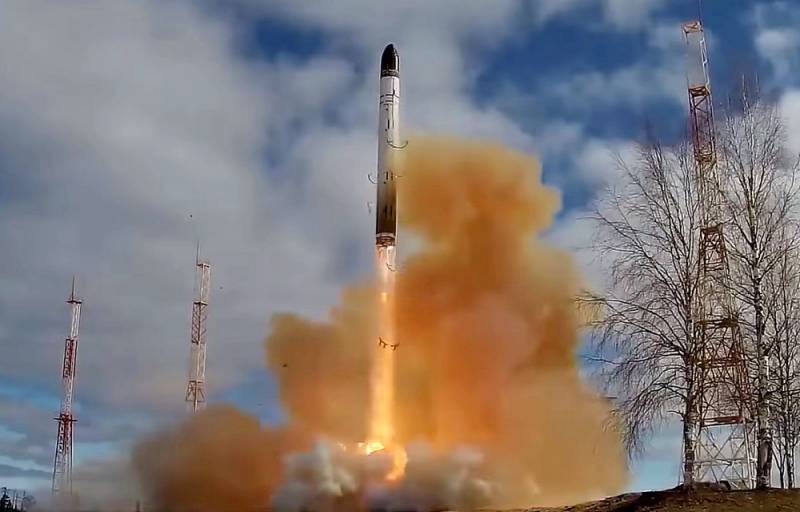 This article develops and closes Thread about the nuclear missile threat emanating from Ukraine to Russia. Some of our readers spoke with disbelief in the spirit of the fact that "any nuclear strike against Russia is the end of the history of mankind on planet Earth." This is not true. Moreover, a Ukrainian-Russian nuclear war has a very high chance of becoming a reality.

Nuclear alignment before the start of the NWO

First of all, it should be noted that the “destruction of all life on Earth” as a result of a nuclear war with the participation of Russia is a stable stereotype of the Cold War era, when both superpowers, the USSR and the USA, personified two irreconcilable and mutually exclusive socialeconomic building, in all seriousness preparing to destroy each other. However, after the collapse of the Soviet Union, a lot has changed, and not for the better for us.

Our “reformers” have reduced offensive weapons so much that today we can talk not so much about “glazing” the territory of the United States, but at the same time about the beginning of a global nuclear winter that will destroy all of humanity, but about inflicting unacceptable damage on the enemy. This is in the best case, if all of our SSBNs, which are tied to 40% of the power of a retaliatory strike, can be safely brought to combat patrol and deployment areas without all these PLO corvettes and frigates, as well as Naval aviation anti-submarine aircraft to cover them. More about the real state of affairs can be Read, for example, on the "Military Review".

So, Ukraine, due to its geographical position, played a very important role in the plans of the Pentagon. The time of the approach of American medium-range ballistic missiles from somewhere near Kharkov or Zaporozhye would be only a few minutes. This is a huge advantage in case Washington seriously decided on a preventive nuclear strike on Russia in order to decapitate its militarypolitical leadership, and at the same time to knock out the maximum number of infrastructure facilities of the Strategic Missile Forces, long-range aviation and the Naval Nuclear Deterrence Force in order to minimize the power of the retaliatory strike that the American missile defense system was supposed to try to intercept.

As an option, ground-based versions of the Aegis Ashore anti-missile systems, which are already available in Romania and Poland, could be located on the territory of Ukraine. Formally, this is a defensive system equipped with 24 SM-3 Block IB anti-missiles designed to intercept Russian medium-range and shorter-range ballistic missiles. However, an important nuance is that at any time during the day, the anti-missiles in the Aegis Ashore universal launch cells can be replaced by Tomahawk cruise missiles with a range of 1500-2000 kilometers, equipped, among other things, with a nuclear warhead.

That is, after February 2014, when the Kremlin returned only Crimea, suspended the DPR and LPR halfway for 8 years, and left the rest of Ukraine to the Americans and their accomplices, everything went to ensure that we have a dual-purpose military infrastructure of the Pentagon at our side, which at any moment could play its fatal role in a preventive missile strike. Until February 24, 2022.

Oddly enough, after the start of a special military operation, things got even worse. The fact is that the deployment of American military infrastructure on the territory of the Independent, which would be used to strike against Russia, gave the Russian Ministry of Defense carte blanche for a retaliatory strike on "decision-making centers." Naturally, if American Tomahawks or medium-range ballistic missiles flew towards Moscow and other targets, Russian ICBMs with nuclear warheads would also fly in response. Everything that would have survived a treacherous preemptive strike.

What has changed now? A lot of things.

Now Ukraine will definitely not be accepted into the NATO bloc. Washington is not formally bound by any treaties or mutual obligations with Kyiv. According to Western propaganda, it was Russia that “was the first to insidiously attack” Ukraine, humiliated and insulted, and therefore the entire collective West is actively helping it.

So here's how we detail told earlier, Square has all the necessary scientific and materialtechnical base for the reconstruction of nuclear weapons and their means of delivery. There are developments of the Ukrainian military-industrial complex on the Grom-2 OTRK, the missile range of which can reach 700 kilometers, there are promising Korshun-2 cruise missiles, analogues of the American Tomahawks, which can fly 1500-2000 kilometers. There are even developments in the field of hypersonic weapons - the Molniya (Bliskavka) air-launched missiles. Also, knowledgeable sources in the SVR recently reported that Ukraine received weapons-grade plutonium from the Anglo-Saxons, which is necessary for the creation of nuclear explosive devices. The implementation of all these defense projects rests only on funding.

Let us ask ourselves a natural question - what exactly can prevent the collective West, primarily the United States and Great Britain, from providing Kyiv with active military-technical assistance in bringing Grom-2, Korshun-2 and Lightning to serial production, as well as in creating own nuclear arsenal?

At minimal cost and with zero risk of receiving a retaliatory nuclear strike, the Anglo-Saxons will create a deadly nuclear threat in Russia's underbelly. Will Kyiv use nuclear weapons against the “aggressor” who “seized the Ukrainian land”? Don't even hesitate. Rockets with nuclear warheads will fly to Moscow, St. Petersburg, Sevastopol and Crimea, to military installations further in the Urals. Will Russian missiles fly in response to London and Washington? And for what reason? We don’t even have a war with Ukraine, only a special operation regime.

Will the Anglo-Saxons let Square in exchange? And how! They don't give a damn about Ukraine or the Ukrainians, who are sentenced to lie to the last, but to inflict maximum damage on Russia. And who will feel better if the Russian Defense Ministry launches a retaliatory nuclear strike on Nezalezhnaya? Let's kill several million Ukrainians and Russians, subjecting the territory of our own "heartland" to radiation contamination, where did the Russian land come from? No matter how you look at it, strategic defeat shines everywhere.

And not only from Donetsk, now everything is needed wider.
"Wider" - how far specifically, Dmitry Anatolyevich? Where is this red line, beyond which the Kremlin is ready to leave the criminal Ukrainian-Nazi regime, deadly for the very existence of our country?
Reporterin Yandex News
Reporterin Yandex Zen
17 comments
Information
Dear reader, to leave comments on the publication, you must sign in.