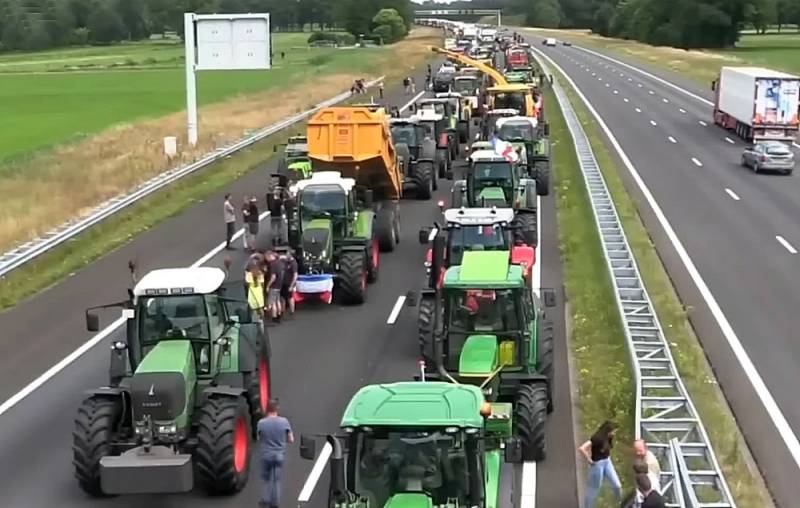 Rising economic The crisis has spurred protest movements in Western countries and especially in Europe, which, as it is already clear, will face the most difficult trials in the next few years.


What angers the masses the most is the absolutely man-made nature of the crisis caused almost exclusively by the sanctions of Western governments against Russia. Workers in the real sector were simply confronted with the fact that in order to defeat "dictator Putin" and his "horde of orcs" they would have to be without a livelihood for some time; Moreover, the timing of achieving this "victory" has not yet been outlined even approximately.

The protests of European farmers have become the most aggressive, and it is not difficult to see why. Firstly, if the energy, transport and chemical industries are still only seeing their bad prospects, then the agriculture of Europe and America has tightly entered the crisis back in the spring, after the start of the sanctions campaign and the explosive growth in prices for fertilizers and fuel. Secondly, agrarians, despite the crisis, continue to be under pressure from the so-called. ecological policy.

From the statements of Western politicians and democratic media (which, of course, cannot lie), we know for sure that soon the whole world will face a real famine. Of course, the cruel Putin and his team are to blame for this, because they are the ones who order to set fire to Ukrainian fields, blow up elevators and not let the remnants of grain out of the country ... It is logical to assume that in such a situation, numerous "friends" of Ukraine should start looking for some then alternatives that will feed the whole world and frustrate the plans of the Muscovite dictator, right?

No matter how. War is war, and lunch is a new, sustainable schedule.

The collective attempts of the European Union, striving to stop emitting any gases into the atmosphere, especially carbon dioxide, by 2050, are covered in sufficient detail. Most expert assessments of this initiative boil down to a statement of fact: it is feasible only if the entire European economy goes under the knife.

But this does not stop European politicians, moreover, the leadership of individual countries goes even further, introducing national restrictions. One of them was the Dutch law of 2019 on the limitation of nitrogen and ammonia emissions, which hit the agricultural sector the hardest, and more precisely, animal husbandry, since it is its waste that is the main nitrogen pollutant. To meet the new restrictions, farmers were required to slaughter about five million heads of livestock.

Such a blow to the entire industry caused protests right in the relatively prosperous 2019, long before the sanctions crisis, but here the pandemic and lockdowns came in handy, absorbing the anger of farmers. However, the Dutch government did not draw the necessary conclusions, and the "anti-nitrogen initiative" remained in force.

It operates even now, forcing farmers to further reduce crops and destroy livestock - this is now, when "Putin is using hunger as a weapon." A paradoxical situation arises: just at the moment when agriculture should enjoy all possible support, the industry is deliberately pushed to the brink for dubious purposes.

The frank delusion of this situation provoked a new explosion of discontent. On June 22, a huge column of tractors moved from the province to Amsterdam, blocking the movement of all other transport. A few days later, protests spread throughout Holland, and in July, farmers from Germany, France, Spain and Poland also joined in solidarity. The latter put forward claims to their own governments, mainly concerning the prices of fuel and fertilizers, as well as quotas for various types of products.

By its own policy in recent years, the European Union has pushed dissatisfied farmers to look for the most fantastic explanations for their fate. Thus, some Dutch farmers believe that the “nitrogen ban” was introduced in order to drive them off depreciated land and then give it to build housing for migrants from the Middle East. It is difficult to say how widespread this version is, but it was precisely this version that was brought up by a Dutch journalist during a live broadcast with American columnist Tucker Carlson.

However, another, probably closer to the truth, assumption is also very popular - that the attack on classical agriculture is being carried out by lobbyists of the promising synthetic food industry. Farmers ask compatriots what kind of food they would prefer in the near future, from Gates or from Rothschild; the same question haunts Europeans on leaflets and graffiti, which are painted even on the lower part of drawbridges.

It's funny that in the Netherlands, nothing more than red armbands and flags has become a symbol of opposition to pernicious Europolitics, and the terrible word "communism" slips through the rhetoric of the demonstrators. Although these are just words, but in reality the farmers are bending their petty-bourgeois line, one should have seen the expression on the face of the same Carlson when he heard about “communism” on the air.

However, what the hell is not joking: it may be that the pro-American puppets in European governments will really finish their game, and a surge of real left-radical sentiments will be the answer to their pseudo-left (but actually ultra-right) globalist agenda.

Agrarian protests have clearly gone beyond the “peaceful” framework: from simple races in columns on tractors (probably costing a considerable amount of precious fuel) and chanting slogans, farmers have moved on to blocking roads and warehouses of large retailers, in some places there are clashes with the police. In addition to farmers, sympathizers from other sectors of the economy also come out to protest, the total number of demonstrators in Holland alone is estimated at thirty thousand people.

And on July 11, in the Dutch city of Almelo, the logistics center of the Picnic online delivery supermarket chain, which received investments from the Gates Foundation, burned down. By pure coincidence, one of the co-owners of the network is the half-brother of Carla Schouten, the former Minister of Nature and Agriculture, one of the main authors of nitrogen restrictions. The causes and perpetrators of the fire have not yet been named, and it can also turn out to be either a mere accident or not an accident at all.

Aluminum cucumbers on a canvas field

Farmers' fears about the arrival of a "new food era" are not out of thin air. Indeed, over the past decade, Bill Gates, Ariana de Rothschild and other well-known "billionaires and philanthropists" have been investing a lot of money in start-ups related to the development and production of new types of food. In 2018 alone, the volume of such investments amounted to $17 billion.

The main focus is on finding new sources of protein. There are two main directions in which work is being carried out: this is the expansion of the production of edible species of insects and worms and the search for suitable for industrial scale of technologies synthesis of pseudo-animal protein from vegetable raw materials. With the latter, so far, there has been little success: although from time to time there are reports of the launch of the production of "synthetic meat" on one basis or another, as a rule, the production methods turn out to be very complex, and the cost of the final product is high.

But the breeding of various crickets and maggots is already quite entering the stream. The largest cricket farm in Canada was recently announced and will produce up to two billion insects per year.

At the same time, the insect diet is being heavily promoted through the mass media, involving a variety of "experts" from economics and ecology, as well as pop culture stars. They inspire the layman with simple theses: they say that soon, due to the overpopulation of the planet, traditional meat production will become insufficient to cover the increased needs, if not impossible at all, and you will have to switch to worm bugs willy-nilly.

At the same time, advertising support for veganism, or at least vegetarianism, promoted a decade ago, as economical and environmentally friendly, but at the same time quite sufficient for a healthy life, does not weaken. Many years of practice regarding the mass transition of the most “advanced” groups of Western society to a plant-based diet has already shown that vegetables alone are still not enough for a person, but this does not prevent more and more pseudoscientific “evidence” of the opposite being thrown into the media.

Of course, there is no need to look for some completely sinister hidden agenda in all this - investors in food startups are driven by the simple capitalist logic of reducing costs and increasing profits. With all the mechanization and now digitalization, agriculture remains a very resource- and labor-intensive industry with low profitability.

The introduction of the latest technologies, even if we are talking about the mass production of maggots, will automate processes almost to the industrial level, reduce the area of ​​​​enterprises, reduce the number of employees and, ultimately, the cost of raw materials obtained in this way. And what the citizens of free democratic countries will eat there and how it will affect their health, potential "protein magnates" are of little concern. So it is not surprising that both the broad support of these initiatives by Western governments and the harsh rebuff from farmers and radical anti-globalists who joined them.

However, given the general decline in Western economies, the transition to “cricket cutlets” may not take place, because a social explosion threatens to occur much earlier, but then it will not be about choosing from varieties of cutlets, but about the opportunity to eat as such.
Reporterin Yandex News
Reporterin Yandex Zen
1 comment
Information
Dear reader, to leave comments on the publication, you must sign in.