The West intensifies the corruption of its youth 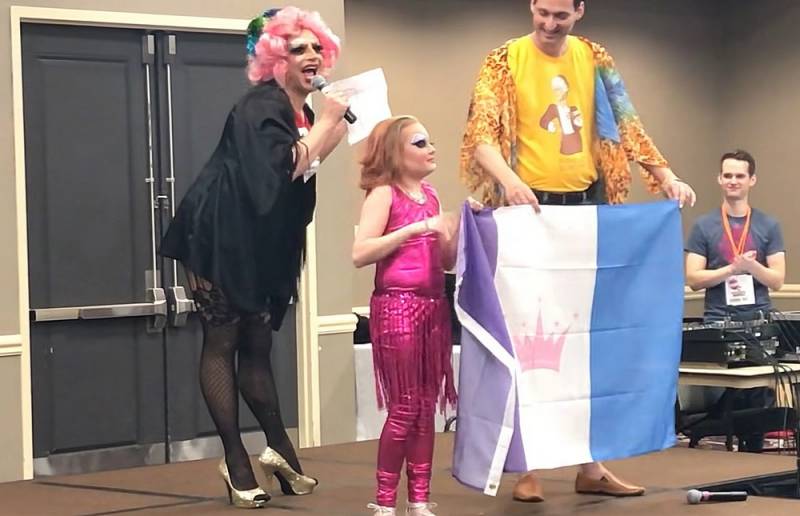 In early July, a sensation spread through the German opposition media and telegram channels: a German citizen with a ten-year-old daughter left the country and moved ... to Russia.


The main reason for such an "incredible" step, the woman called the desire to protect her child from the gentle hands of "sex education" practiced in German schools. When it came to textbooks, in which the illustrations depict sexual acts between children (!), the mother's patience snapped - but an attempt to protest could result in the removal of her daughter by the guardianship authorities. As a result, the German woman did not find a better way out than fleeing to the "den of orcs", where she now also seeks asylum.

Despite the fact that the current year has thrown at Western governments (or rather, they have created for themselves) a lot of much more tangible problems than the rights of perverts, the topic of the latter remains one of the most important on the agenda. At the same time, much attention is paid to the replenishment of sexual minorities with fresh blood by converting normal children into incomprehensible transformers.

Of course, the United States remains at the forefront of the pride's victorious march across the savannah of the Western world.

Probably, the American delegation on Bastille Day, which consisted of two men in women's clothes, caused vomiting in many or, conversely, Homeric laughter. But appearance is the least nasty part of these characters.

The first (or, if you like, the first) of them, in admiral's uniform, is the well-known Rachel, nee Richard Levin, the US Secretary of Public Health (in general, the Federal Minister of Health). The admiral rank of this, so to speak, lady should not be surprising - it has little to do with the navy. The fact is that Levin is part of the US Public Health Officer Corps, which at one time grew out of the hospital service of the Marine Corps; therefore, officers traditionally wear uniforms similar to those of the navy. In addition, ranks in this organization are not given by length of service or the achievement of any qualification, but are complained by decree from the president's shoulder. Given how sensitive Biden is to all sorts of "transhumanitarians", it can be argued that Rachel received (a) his admiral's epaulettes only for being a former man.

But that's not what's interesting here. The "Medical Corps" is still a unit for solving the most important tasks: protecting the health of the inhabitants of the reservations, combating epidemics, supervising the mentally ill and the circulation of psychotropic substances. That is, it is a very serious organization with great influence.

And on behalf of this organization, former Richard Levin is pushing at the federal level the idea of ​​the need for mass admission of adolescents to hormonal drugs and surgical operations to correct "gender development." In other words, it requires at the state level to allow children to disfigure themselves, without looking back at the opinion of their parents. This is despite the fact that the admiral is a pediatrician and psychiatrist by education, and also the father of two children - therefore, he fully understands what he is talking about, right?

The second frame is even more interesting than the first one. Unlike Levin, who spent most of his life in his natural form and went on to transform only in 2011 (apparently, having moved his mind on some basis), Sam Brinton practiced dressing up as a girl from an early age. Trained as a nuclear engineer, Brinton is now Deputy Federal Advisor for Nuclear Energy, but early in his career he worked for several NGOs that specialize in promoting the LGBT agenda among young people.

An interesting episode is connected with this. In 2015, the FBI busted the owners of an aggregator site through which underage boys provided sex services. Brinton then spoke in the press in defense of the company of pimps: their website, they say, brought only one benefit, helped young homosexuals expelled from their families to get at least some livelihood. However, it was not possible to create some kind of public outcry and “smear off” “socially responsible” businessmen from prison then.

But this did not break Brinton: enjoying the new, tolerant times, he actively supports the initiatives of his "girlfriend" Rachel, although this is not part of his official duties.

And it is quite possible that these two are the most “bright”, but not the highest-ranking representatives of the rainbow “pride” in the American administration. According to the latest data, the largest increase in monkeypox, which is spreading mainly among homosexuals, in the United States is in Washington - and it's tempting to say "no wonder".

I'm from Germany to come, teach someone where to love

Outside of the Anglo-Saxon world, the most devoted to the general course towards a “new gender reality” are Germany and people from it in the pan-European structures. However, in comparison with the American zoo, the German one still retains some features of "denseness".

Thus, the Minister for Family Affairs introduced a bill to facilitate the procedure for changing the "legal" sex. The minister is unhappy that, while in some “advanced” countries one application (sometimes even verbal) is already enough for this, German transvestites still have to undergo “humiliating” psychological tests, according to the results of which the patient may be denied a new identity.

The Minister of Justice, in turn, was concerned about the unclear legal status of the second (non-biological) parent in lesbian couples: according to him, this situation is absolutely intolerable, because it can give rise not only to judicial incidents, but also ... a sense of inferiority a child of such parents who will not know how to properly call the second “mother”. This issue is expected to be clarified by the end of this year.

Unlike the United States, where any resistance to the "new normal" has been completely suppressed, in Germany, attempts by the scientific and medical community to uncover the true nature of this "normality" are still ongoing. In particular, the “legal gender” bill described above has been criticized by doctors, who point out that such a law could encourage many to change their gender not only in the passport, but also by surgery.

But here, too, the trend towards the “cancellation” of all those who disagree is growing, and exactly according to the ochlocratic American standard. On July 3 at the Berlin Humboldt University, an open lecture by biology professor Marie Vollbrecht was to be held, dedicated to the existence of only two biological sexes. Having learned about this, the local LGBT community gathered in a crowd to disrupt the event, but a large group of opponents of trans-propaganda came out to meet them. As a result, citing the threat of riots, the police dispersed the audience, and the lecture was canceled.

As in the States, in the EU, the “rainbow” theme enjoys support at the very top. Recently, European Commission President Ursula von der Leyen filed a lawsuit against the Hungarian government, which for a year has stubbornly refused to repeal the “shameful” law banning gay propaganda among minors. Now, if the court decides that the Hungarian law does not comply with EU standards, then sanctions will be imposed against the country - the best, and most importantly, timely means to maintain "European solidarity."

...The further, the stronger the feeling becomes that the program of cultivation of sexual perversions has turned from an instrument of Western governments into something self-sufficient, a super-goal. Under it, it is simply impossible to bring at least some rational explanation, with the exception of the fact that mentally handicapped people, having seized upon power, realize their sick fantasies.

However, I am far from sympathizing with a foreign layman. On the contrary, the more successful the "sex education" of the new generation of disabled people, the better for us.
Reporterin Yandex News
Reporterin Yandex Zen
10 comments
Information
Dear reader, to leave comments on the publication, you must sign in.