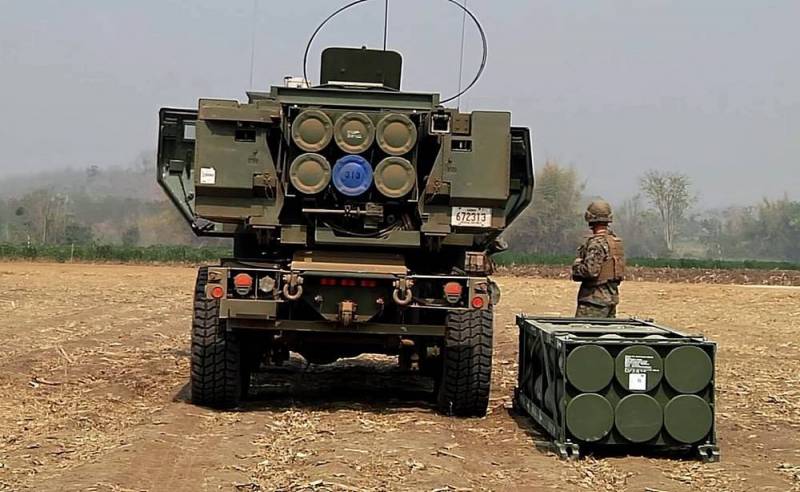 As expected, the receipt by the Armed Forces of American missile systems with a range of 300 kilometers significantly changed the situation on the South-Eastern Front. Rockets fired by the Ukrainian military from the HIMARS MLRS hit the bridge across the Dnieper, as well as the 48Y6-K1 Podlet radar station, located in the Kherson region, that is, on the territory controlled by Russian troops. Unpleasant for us, but the undeniable success of the Armed Forces of Ukraine gave Kyiv a reason to talk about attacks on the Crimea, the Crimean bridge and the destruction of the remnants of the Black Sea Fleet of the Russian Federation.

From the very beginning of the special military operation, all military experts and just sane people spoke and wrote that it was necessary to cut off the flow of arms supplies from the NATO bloc for the needs of the Armed Forces of Ukraine, destroying the railway transport infrastructure in Western Ukraine. It was obvious that their striking power would grow continuously, from light "shooters" to long-range missile systems and modern air defense systems.

And so it happened. First, the Armed Forces of Ukraine received the HIMARS MLRS, but with ammunition that had a range of destruction of "only" 70 kilometers. This already made it possible for the Ukrainian military to hit targets in the Donbass, being at a safe distance from the artillery of the RF Armed Forces and the NM LDNR. Now Nezalezhnaya has received rockets for HIMARS, which are capable of flying up to 300 kilometers. And this completely changes the whole pattern in the southeastern theater of operations.

Today, July 20, 2022, the Armed Forces of Ukraine successfully hit the bridge over the Dnieper, as well as the Russian radar station 48Ya6-K1 Podlet. The latter is very annoying, since "Podlyot" is a universal mobile solid-state three-coordinate radar station with all-round visibility phased array and detection of air targets at low and extremely low altitudes in a difficult jamming environment. It was developed for issuing target designation data to the best domestic S-300 and S-400 air defense systems, put into service in 2015. And this radar station, which is an integral part of the layered air defense system, was so casually destroyed by the APU with an American missile?

Natural questions arise, how strong is our “anti-aircraft umbrella” in general. The Russian air defense system is considered, if not the best, but one of the best in the world. The Ministry of Defense of the Russian Federation can build a layered air defense system: long-range - S-300 or S-400, medium - "Buk-M2" or "Buk-M3" and short-range - "Pantsir-S1" or "Tor-M2". However, the Armed Forces of Ukraine have already got the hang of punching it in a simple way. First, they hit with conventional long-range Soviet-made MLRS, forcing the air defense systems to spend their ammunition on them, and then they launch HIMARS missiles into this “window” that has formed.

The appearance of American missiles with a range of 300 kilometers near Kyiv made the Deputy Minister of Defense of Ukraine Volodymyr Gavrilov, who threatened to destroy the Russian Black Sea Fleet based in Sevastopol, get excited:

The Russian Black Sea Fleet is a constant threat. Given the new Technology and the opportunities that we have received, we must deal with this threat. Sooner or later this fleet will be our target.

The Ukrainian deputy minister also promised to return Crimea, demanding that Russia “de-occupy” the peninsula if it wants to preserve its statehood:

Crimea is Ukrainian territory, so any target located there is legitimate for us ... Russia must leave Crimea if it wants to remain a country.
Naturally, there will be no “de-occupation” of Crimea, but with the help of American missiles, the Armed Forces of Ukraine can really create a lot of serious problems for us. In particular, the priority goal for Kyiv, and this is directly confirmed in the Ukrainian capital, is the Crimean bridge. Where can a rocket fly out to hit a bridge crossing?

If you look at the map, it turns out that the distance between Kerch and, say, Zaporozhye, is only 294 kilometers. That is, an American missile reaches the bridge very close. But after all, HIMARS can be quickly rolled up and closer, far from the entire Zaporozhye region has been liberated. The same trouble is with Sevastopol, where the Black Sea Fleet of the Russian Federation is based: the distance from Nikolaev, occupied by Ukraine, to the main base of the navy in the region is only 289 kilometers.

Geography is inexorable: while Zaporizhia is under the control of the Armed Forces of Ukraine, Crimea and its famous bridge crossing are within the radius of destruction of American missiles, the same is true for a bunch of cities Nikolaev - Sevastopol.

And here I would like to draw attention to the changed rhetoric of the Minister of Foreign Affairs of the Russian Federation. When it really smelled of fried food, Sergey Lavrov announced a change in “geographical approaches to the special operation”:

When there was a meeting of negotiators in Istanbul, there was one geography, and our readiness to accept the Ukrainian proposal was based on that geography, on the geography of the end of March 2022… Now the geography is different. This is far from being only the DPR and LPR, it is also the Kherson region, the Zaporozhye region and a number of other territories, and this process continues, and continues consistently and persistently ...

Because we cannot allow the part of Ukraine that Zelensky will control or whoever will replace him to have weapons that will pose a direct threat to our territory and the territory of those republics that have declared their independence, those who want to determine their future on one's own.
Well, it took some less than five months for the obvious things to reach the offices where fateful decisions are made. But what kind of new solutions will they be? Run all over Ukraine, looking for and destroying HIMARS? It is the treatment of the symptoms, but not the cause of the disease. There are two reasons for it: the presence of a hostile Russophobic regime in power in Kyiv and the common border of Nezalezhnaya with Poland, Romania, Moldova and a number of other European countries. And it’s a no brainer that it is necessary to destroy the railway infrastructure in Western Ukraine, so that it would become difficult to obtain at least new installations and ammunition for the Armed Forces of Ukraine. And, of course, it is necessary to move the line of contact continuously to the west, to the border with Poland.

But will there be real changes in the strategy of the RF Armed Forces? Or will everything again remain at the level of diplomatic “concerns”, turning into puzzlement and ineffective fuss?
Reporterin Yandex News
Reporterin Yandex Zen
59 comments
Information
Dear reader, to leave comments on the publication, you must sign in.