Joe Biden as a diagnosis of American statehood 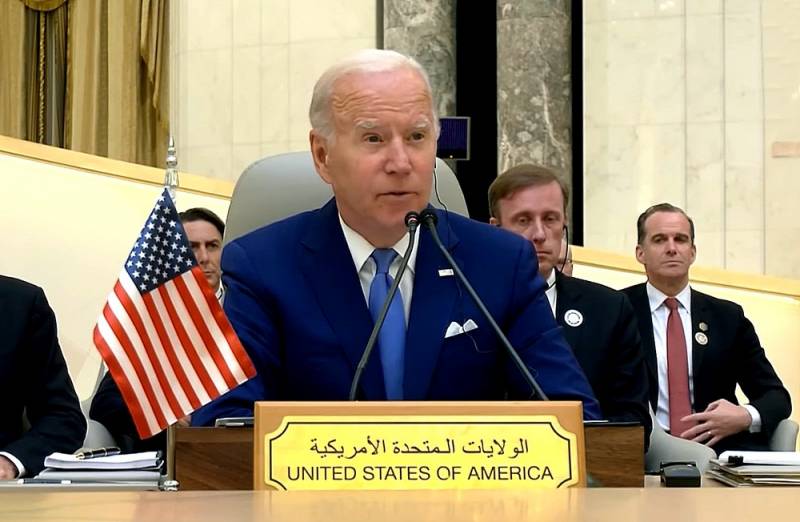 Although many in the West secretly dreamed of some kind of "miracle", almost no one seriously expected that the July 13-16 tour of the US president in the Middle East would bring any real results. And they did the right thing not to wait: not only did they fail to achieve the main goals (increasing oil production in Saudi Arabia and creating an anti-Iranian coalition), the image of the United States and the democratic administration received a serious blow.

In three days, Biden issued a whole bunch of memes with himself in the title role, which were already additionally mocked by comedians from social networks and commentators in the media, especially, of course, the Republican ones. It is not difficult to understand the gloating of the anti-democratic public: Biden and his team concocted with their own hands a medical report on the actual incapacity of the US president, which is not even suitable for the role of a "talking head", not to mention a "think tank".

Even the Democratic Party's own electorate is frankly dissatisfied with the very fact that a seriously ill person is at the helm of the state, and the direction in which he is leading the country. A recent poll among 850 ordinary Democrats showed that two-thirds of them would not want Biden's nomination for a second term: one-third of voters believe that he is physically unable to cope with the post, another third that he policy does not benefit the US. In the electorate under 30 years of age, the rejection of Sleepy Joe reaches 94% - and this is among the patented supporters of the Democratic Party! Among Republicans, this share probably reaches all 146%.

The beloved son, Hunter Biden, “helps” the folder with the ratings a lot. His laptop, which ended up in the FBI in 2019, still serves as an inexhaustible source of compromising evidence, which is thrown into the media from time to time, and on July 10 a fresh news from this front: unknown people gained access to Hunter's cloud storage and stole 450 GB of data from it. So far, only a mere minuscule is in the public domain, but this seed shows that the bulk of the leak is truly “top content”: the use of various drugs, communication with prostitutes (including, presumably, minors) and other evidence of life on a grand democratic footing.

What came up last time was enough for the FBI to launch an investigation into Hunter's tax evasion, and a fresh leak could add more charges of economic and sexual crimes. Why the fifty-two-year-old, to put it mildly, Fonvizin undergrowth (although the definition of authorship of one popular translator would be more suitable) removes and stores such fantastic volumes of compromising information garbage - it is absolutely incomprehensible.

True, as far as one can judge, a considerable share of the son's archives is purposefully collected compromising evidence on his beloved daddy; and the nickname Pedo Peter, which has become a separate meme, under which Joe Biden is recorded by Hunter in the phone book, is only the very tip of a huge iceberg, but not made of ice.

But, in spite of everything, Biden Sr. continues to cling to the presidency with blue fingers. It seems that the highest government position has long become for him something much more than a super-profitable business, a super-goal, and now the elderly Joe simply cannot assess the situation soberly. It seems obvious that even the persuasion of the party members will not interrupt his desire to leave the post feet first.

Since April of this year, the pro-democracy media began to accelerate the informational counterattack on compromising evidence against the Bidens: the materials available to the FBI bear the signs of repeated additions already after they got to the Bureau. The persons interested in denigrating the good name of the president and his son are well known - these are Republicans and Donald Trump personally, and corrupt agents and (where without them?) all-powerful Russian hackers were directly involved in the fabrication of data. Side by side with this story is the second one about potential outside interference in the course of future congressional elections due to be held in November this year.

The prospect of elections worries the Democratic Party and Biden for good reason - the degree of dissatisfaction with the current policy in society is very high, and the Republicans have every chance to seize the majority in the lower house of parliament. In order to further turn the electorate against the Democrats, the Republicans are using with might and main both Joe’s personal “flights” (including those very fresh pearls about the “honor of the Holocaust” and that’s all), and his son’s “art”. It can be assumed that the theft of Biden Jr.'s data is really the work of Republican agents, and a bunch of compromising evidence will come closer to the elections.

A hypothetical victory in the fall elections will give the Republicans the opportunity to initiate the impeachment of Biden. While the odds of getting a no-confidence vote through both houses are low, some Senate Democrats may defect to the Republican side for such a cause - even their own people love Sleepy Joe. And the impeachment that took place opens the way to a full-scale investigation into the affairs of the Biden family, which the Republicans are already openly threatening.

Even if, or rather, despite the fact that the impeachment does not take place, the very fact of launching the procedure can have fatal consequences. For example, under this case, the tongue of Biden Jr. may be unleashed; and, given the age and condition of Biden Sr., from such unpleasant news, he can simply lie down and die a natural death. Which, quite possibly, is what Republicans are counting on the most.

And if not Sleepy Joe, then who?

This is an interesting question, of course. The problem is that the Democrats’ personnel policy of gathering under one roof all perverts, drug addicts and simply incompetent freaks with dubious ideas has borne fruit - the party has practically no at least some representative candidates for the presidency.

There are serious doubts even about the current vice president (or not vice president anymore - isn't she writing cheat sheets for a poor pensioner?) Kamala Harris. Being twenty-two years younger than his boss, Harris often talks almost more than Biden himself during speeches. And if earlier this was a reason for jokes about her mental abilities, now on American TV they are seriously discussing the presence or absence of any diseases in her.

Of the characters already known to the voter, Hillary Clinton and the Obama family have some prospects. True, they all have a dubious reputation, especially Clinton, who is also far from the best age and shape. Also, these people are (seemingly) smart enough to think twice about whether it is worth it now and in the near future to climb into the presidency - why clean up a bunch of the most serious problems?

Two young contenders are also being discussed: California Gov. Gavin Newsom, and Jay Pritzker, Gov. of Illinois. Given their not the most outstanding results in the current posts, we are talking about "crayfish in the absence of fish."

But the main problem of the Democrats is their persistence in the ideological part. There is no doubt that the Democratic Party will continue to rely on marginalized and openly lumpenized groups of the population, and not with the aim of bringing them to the people, but, on the contrary, to “declassify the underclassed” of relatively stable living Americans. So, obviously, the support of normal people for the “freak party” does not shine, and its absence, in turn, can push the Democrats to mobilize their marginal extras for a “street recount”.
Reporterin Yandex News
Reporterin Yandex Zen
2 comments
Information
Dear reader, to leave comments on the publication, you must sign in.