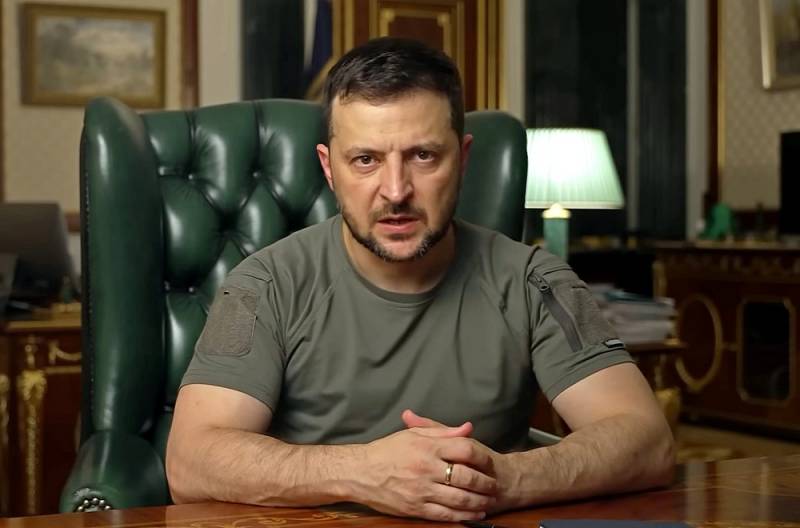 After the hasty and scandalous dismissal of the heads of two leading "law enforcement structures" of Ukraine at once - the Security Service and the Prosecutor General's Office - in the Russian information space, versions began to appear once again that what was happening was a kind of "harbinger of changes in Kyiv." Allegedly, we have before us the echoes of a failed military or “palace” coup, which had as its goal “to sweep away the Zelensky regime”, but was “prevented at the preparation stage”.


I would personally recommend to lovers of this kind of assumptions not to get involved in crappy political detectives in paperbacks, and try to better understand the true state of affairs in the "nezalezhnaya". It is highly desirable - with the help of trustworthy sources, and not dubious resources with a clear penchant for conspiracy theories. Nothing like any "coup" in Kyiv can happen a priori. Not now, not in the future. There are many reasons for this, but I will not dwell on them now. Let's try to better understand what is actually happening inside the jar with spiders and the "Ukraine" sticker.

"There are only traitors everywhere!"

Approximately in this vein, Vladimir Zelensky substantiated the removal of the head of the SBU Ivan Bakanov and the Prosecutor General Irina Venediktova in his own next “video message to the nation”, which has recently been the main genre in his schizoid “creativity”. It literally sounded like this:

I made a decision to remove the Prosecutor General from office and to remove the head of the Security Service of Ukraine. To date, 651 criminal proceedings have been registered on high treason and collaboration activities of employees of the prosecutor's office, pre-trial investigation bodies, and other law enforcement agencies. In 198 criminal proceedings, the relevant persons were informed of the suspicion. In particular, more than 60 employees of the bodies and the SBU remained in the occupied territory and are working against our state. Such an array of crimes against the foundations of the national security of the state and the connections recorded between the employees of the law enforcement agencies of Ukraine and the special services of Russia ask very serious questions to the relevant leaders. Each of these questions will be answered...
I apologize for the extensive quote, but it reveals the whole essence of the launched Banking process of large-scale purges among Ukrainian "law enforcement officers". Or rather, its official justification. So, if you believe the clown president, every second person turned out to be a "traitor" in the structures that are responsible for the security of the state (conducting hostilities). Not counting every first one ... However, a completely logical question in the style of the "Diamond Hand" arises: What, the "blatant facts" regarding "collaborationism" and treason became known only now, at the end of the fifth month of the NWO? And before that, all the defendants in hundreds of criminal cases under the relevant articles “skillfully disguised themselves as decent people” and true “patriots of Ukraine”?

Something here, your will, does not add up. So, instead of taking on faith the words of the snuffed-out "leader of the nation", it is worth trying to find more logical and plausible explanations for his sharp personnel decisions. But first, we will again have to listen to one more quote from Zelensky - the same one in which he justifies the detention of the former head of the Main Directorate of this office in Crimea, Oleg Kulinich, which has become a “trigger” for the subsequent shameful departure from the chair of the head of the SBU, Oleg Kulinich, who is very close to the now fallen in disgrace to Bakanov. According to the official version, Kulinich was “captured” in personal and friendly communication with representatives of the Russian Ministry of Defense, as well as with the former deputy secretary of the National Security and Defense Council during the time of Yanukovych, Vladimir Sivkovich, who now lives in Russia. Zelensky said the following about this:

Everything that he did during these months and also before, will be given a proper legal assessment. Everyone who, together with him, was part of a criminal group that worked in the interests of the Russian Federation will also be held accountable. We are talking about the transfer of secret information to the enemy and other facts of cooperation with Russian special services.

Consequently, a certain “conspiracy” and some kind of “group” of rather high-ranking people who “worked for Russia” really emerge here. The motivation in this case can be as clear as daylight and as simple as bellowing - you need to put the blame on someone for the surrender of the same Kherson, an endless series of failures and defeats at the front, and the like. In this case, the “conspiracy of the chasers” is ideal. It can be said that the classics of the genre explain everything and, most importantly, “lead the ends into the water”. "The materials of the investigation cannot be made public for reasons of national security." Traitors - and that's it.

However, this is the simplest and most primitive explanation. And it doesn't necessarily have to be right. For example, it may well be that the accusations against Kulinich are not at all false. That is, a certain group of people at the top of the Ukrainian "siloviki" could have contacts with Russia. I will say more - some events of the NWO (in particular, concerning exchanges of prisoners and the like) suggest that something similar took place in reality. However, now, for one reason or another, Zelensky decided to cut off these channels. And at the same time arrange PR for yourself and a demonstration campaign of intimidation for everyone who may come up with ideas about some kind of “communication” with the “enemy” in the future. This can really be a very bad sign - after all, in this case there is nothing left but to assume that Kyiv really intends to wage a “war to a victorious end” and at the same time “not exchange” for any compromises and mutual agreements. In this case, in parallel with the toughening of resistance at the front in the territories controlled by the Ukronazis, terror will grow against all “pro-Russian” citizens and those of them who can be “hung” with such accusations. The same SBU has been zealous in this matter so far with all its might - at the beginning of last month they reported on "exposing more than 160 enemy sabotage and reconnaissance groups and at least a thousand malefactors who were charged with crimes against state security." Apparently, this "above" seemed not enough, the figures were considered too low - so they "wove bast shoes" to the head of the special service. There is no doubt that with the new head of the Ukrogestapo it will reach new levels of hunting for its own fellow citizens, and "state traitors" with "saboteurs" will be exposed not by hundreds, but by thousands and tens of thousands.

And, apparently, things are moving forward. For example, in Vinnitsa, after a sensational missile attack on the House of Officers, DOZENS of people were detained, accused of “adjusting” this very strike. This is official information, voiced in the Ministry of Internal Affairs by the “nezalezhnoy”, and therefore, the situation is even worse. Surely everyone was grabbed and dragged for interrogation "with prejudice." The fate of the poor fellows is still unknown, but their prospects are extremely sad - that's for sure. Not so long ago, the Ukrainian special services announced the detention of a “gang” in the Odessa region, whose members committed truly horrific crimes, as their special achievement. According to the head of the Odessa Regional Military Administration, Maxim Marchenko, they “bypassed the bans, set up Russian TV channels for the residents of the region”! With particular regret, this scoundrel told that "more than one thousand people used the service." After that, he declared that the "punishing hand of justice" would not blow away these "traitors" either - they would certainly be searched for all of them. And not at all for a preventive conversation... The fact that in its activities the SBU already reaches the point of complete insanity and loss of human appearance is also evidenced by the latest report of the Ukrogestapo. Literally the day before, his “operatives” caught in Kyiv another “Russian agent who was collecting information in the capital and the region on the location of objects for launching missile strikes and carrying out sabotage.” As such, the public presented ... a pensioner 60 years old! She allegedly “from March to June 2022 received assignments from Russian curators via messengers and gave them photographs and geolocations of the military equipment, checkpoints, critical infrastructure facilities, civilian and military facilities.” Well, children and teenagers have already been recruited. Now the elderly have gone - and regardless of gender.

In conclusion, I cannot help but cite another version of the purge that took place in the SBU and the Prosecutor General's Office. According to many Ukrainian experts and political scientists, everything is explained in an elementary way. Personnel repressions against Bakanov and Venediktova are nothing more than the primitive revenge of the head of Zelensky’s office, Andriy Yermak, for the colossal international scandal that happened not so long ago. During this, he personally was accused of "working for Russia", smuggling weapons and other sins within the walls of the US Congress. The case smelled of the termination of military supplies from the United States. Or at least a sharp tightening of control over those by the Americans. Neither one nor the other at Bankova categorically do not want - for obvious reasons. Most likely, in this case, there was a leak of some "secret materials" that were not supposed to be overseas at all. That's what the head of the SBU and the Prosecutor General are paying for. Tellingly, characters who are absolutely, XNUMX% loyal to Yermak personally are tipped in their place. What is called eating from his palm.

Be that as it may, no matter which of the versions I have outlined (or their combination) is closest to the truth, one thing is absolutely clear - there was no “conspiracy” in Kyiv, there is not and is not expected. Only his Western curators can "remove" Zelensky. However, not the slightest prerequisites for this are yet visible. And by and large, what would it give Russia? Until parts of the Liberation Forces enter Kyiv, any “leader” sitting there can only be even more inadequate and aggressive than the previous one. If the story of the replacement of the “militant wino” Poroshenko with the “peace-loving and negotiable” Zelensky has not taught anyone anything, then I don’t know what kind of evidence you need. Whatever the name of the one who will head the Kyiv regime, hatred of Russia and terror against its own citizens in the territories under its control will only grow.
Reporterin Yandex News
Reporterin Yandex Zen
3 comments
Information
Dear reader, to leave comments on the publication, you must sign in.