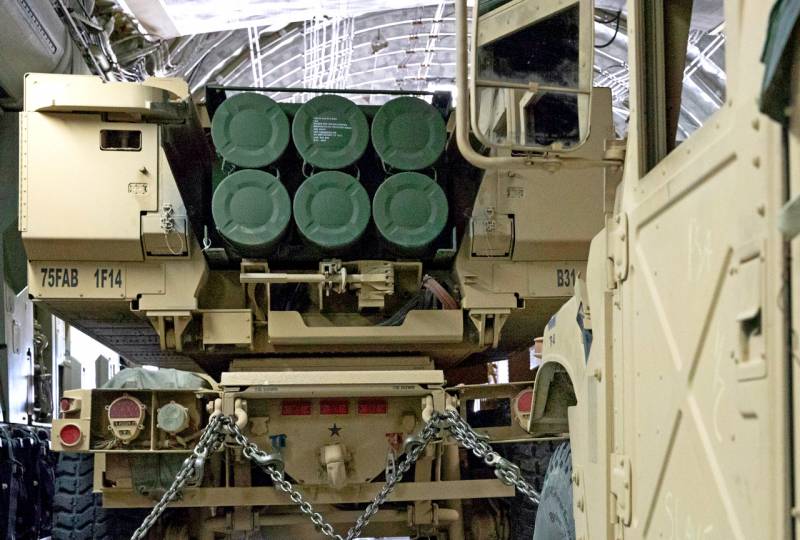 The issue of supplying Kyiv with American long-range MLRS, which was so vividly discussed in the Russian information space even when the US only expressed the corresponding intentions, has already moved from a theoretical plane to a purely practical one. HIMARS and MLRS M270 have already added to the arsenals of the Ukronazis along with other deadly "iron" received from "partners" from the West, and began to do their dirty work, inflicting ruthless blows on their intended targets. First of all, on peaceful settlements in the territories previously liberated by the Russian Armed Forces in the Donbass.


Today, the question is rather not whether the APU will receive even more powerful and precision-guided munitions from the Americans, capable of hitting not 70-80 kilometers, but all 300, but when exactly this will happen. In any case, Kyiv openly expresses confidence that events will develop precisely in this scenario. Alas, based on the current actions of Washington and the rhetoric of its high-ranking representatives, this is not empty boasting. The United States will continue not only to continue, but also to increase its military support for the “non-secure” one. And, if the supply of its HIMARS-class weapons does not become the frontier, which will be followed by the most decisive and tough reaction from Russia, in the future the forces conducting the NMD will face much more serious problems than today.

In this text, I will not touch on purely technical problems and issues of confronting the MLRS delivered from the United States - let's leave this moment to competent military experts and focus on the other side of the problem. Initially, some in Russia pinned their hopes on the fact that across the ocean they would beware of giving such serious weapons into the clutches of the Ukronazis for fear of causing a corresponding “response” from the Russian side. Like, this will be “a step towards escalation, fraught with direct involvement of the United States in the conflict,” must Washington understand this? It seems that from everything that has happened since the beginning of the NMD, and especially since the West began to provide Ukraine with full-scale military support, including the supply of heavy weapons, they drew completely different conclusions. And it cannot be said that the star-striped bastards did not have any reason for this at all.

All warnings regarding the destruction of convoys from the NATO military technique and the "forceful" suppression of its transfer to the territory of the "nezalezhnaya" turned out to be exactly the same category as the threats about "strike on the decision-making centers." It's an uncomfortable truth, but it's true. Today it becomes clear that initially the MLRS were supplied exclusively with “limited range” ammunition, it was only a “trial balloon”, a test of Moscow's reaction to these, already unacceptable actions in themselves. Such, in fact, did not follow. HIMARS inflicted a series of extremely painful blows for the Liberation Forces - on Nova Kakhovka, Lugansk, and other places. And again, the arrival of "Caliber" did not happen either in the Ministry of Defense of Ukraine, and even more so in the Pentagon, which is fully responsible for these barbaric raids.

What's next? And let's ask the head of the military department "nezalezhnoy" Alexei Reznikov about this. The day before, in an interview with the Financial Times, he bluntly stated that Ukraine would soon receive HIMARS ammunition capable of hitting 300 kilometers. Literally it sounded like this:

I think it's a phased movement. We give them proof that we can use HIMARS with precision and we'll get even more and more range. As a result, already this year we will see a counter-offensive campaign and that it will be successful.

At the same time, Reznikov did not fail to boast that Ukraine has used HIMARS over the past three weeks to strike Russian ammunition depots far behind the front line, "damaging Russia's artillery vehicle." However, another interview of this figure is of much greater interest, in which he elaborated on the issue of Kyiv's obligations "not to use American MLRS to destroy targets on Russian territory." Here, right, it is worth quoting again verbatim:


We pledged that we would not use high-precision weapons against Russian facilities on the territory of the Russian Federation. We showed this everywhere, even I personally did this in a letter addressed to my colleague, the head of the Pentagon, that we will use American weapons to deter the enemy and de-occupy temporarily occupied lands only on the territory of Ukraine.
But the most interesting thing came next - as the minister's answer to the question of whether the obligation of the Ukrainian side extends to Crimea:

I told US Secretary of Defense Lloyd Austin that we have enough strategic facilities in Russian-occupied Ukrainian territories. To which he replied: “We understand you!”
How would you interpret this passage? And interpret it how you want. To the extent of their own imagination and a penchant for realism.

Isn't it time to start in earnest?

Perhaps the memory of how many times the intentions to strike at the Crimean bridge, the Russian Black Sea Fleet in the bays of its base (specifically, in Sevastopol) and other objects on the territory of the peninsula has already been voiced in the “non-destructive” one will help you in this. You can write it off as much as you like on the meaningless chatter of couch “military experts” and retired warriors who are not related to making real decisions, but is it worth it to engage in complacency? Ideas, as they say, are in the air. And, besides, why would Pan Reznikov be so impatient to get ammunition with a range of 300 kilometers? Until the Kherson region or the same Donbass HIMARS, alas, they get it anyway. At least for now. And what about long distances? That's right, the territories of Russia, including Crimea, of course, on the issue of which Kyiv and the Pentagon have that very touching "mutual understanding" that was mentioned above. The fact that Reznikov's rantings about the upcoming "increase in range", unfortunately, are not just empty dreams, makes us believe a number of other statements that have been made recently. For example, Fyodor Venislavsky, a member of the Ukrainian parliamentary committee on national security and defense, said bluntly:

At all levels, our state is negotiating with US representatives on the need to provide us with longer-range missiles for HIMARS. I think that there is every chance to break through this and get long-range missiles ...
And the American edition of the Financial Times a week ago published an article in which, citing a certain "high-ranking representative of the Pentagon", he said that the new HIMARS MLRS, which will soon be delivered to Ukraine, "shoot even farther and have greater accuracy than previously transferred samples" . Most likely. in this case, we are talking about the type of ammunition that Kyiv is so eager to get.

For what kind of purposes and where the “arrivals” will follow, after that you can guess until you are blue in the face. However, does it make sense to do this in principle? There is no doubt about one thing - a sharp increase in the capabilities of the MLRS will be used by the Ukronazis not at all for counter-battery combat, but for organizing a new wave of terror against the civilian population and destroying civilian objects. However, this is only part of a much larger problem. When this article was being prepared, it became known that the US House of Representatives approved amendments to the military budget, providing for the allocation of $ 100 million for the training of Ukrainian military pilots on American aircraft (in particular, F-15 and F-16). Let me remind you that the relevant bill was registered in Congress at the end of June. It was introduced by a member of the US House of Representatives from the Republican Party, US Air Force veteran Adam Kinzinger. And now this initiative has quite successfully passed the vote. What is fraught with such a step in the future, I think, there is no need to explain.

The Americans are pragmatic people, if they decide to invest a hundred million in the training of pilots, therefore, the supply of appropriate fourth-generation fighters to Ukraine is not far off. At the same time, it is not at all necessary that Ukrainian pilots, allegedly trained in the United States, will actually sit at their helms. Given the cost of these machines, they are more likely to be trusted by their “retirees” with solid experience. However, all this is particular. I will again leave it to “specially trained people” who understand this more than I do to make predictions about how the course of the NMD can be affected by the appearance of such a class of military aviation in its theater. In any case, this will create more than enough problems for the Liberation Forces.

In a recent, highly publicized speech about a special military operation to demilitarize and denazify Ukraine, Russian President Vladimir Putin said that "Russia hasn't started anything in earnest yet." So isn't it time to start? Isn't it time to finally understand that all hopes that overseas will come to their senses, "let go" and stop pumping the "nezalezhnaya" with more and more modern, perfect and deadly weapons, are nothing more than an extremely harmful and dangerous delusion. An exhaustive answer to them can be a statement made by a Pentagon representative at an official briefing held in this department on July 9:

The main thing is that the Russians know that the Ukrainians will be able to continue the fight. If the Russians think they can outlive the Ukrainians, then they need to rethink that. We are already thinking about what Ukrainians will need in the coming months and years...
Years! This is how long the United States expects to prolong the agony of the Kyiv regime and the bloodshed on Ukrainian soil. During such a period, it is indeed possible to train pilots and train missilemen, and, most importantly, equip them with the appropriate equipment. If the supply of American weapons, which pose an increased danger to Russia, is not put an end to, without any hesitation in the means and methods, MLRS with long-range ammunition will be followed by fighters, and after them ... Tomahawk cruise missiles? Why not? In Ukraine, they are already saying with might and main that only with their help “can Moscow be forced to abandon the strikes with Kalibr”. Do not believe in the possibility of this? Well, the prospect of supplying HIMARS APUs also seemed fantastic to many ...
Reporterin Yandex News
Reporterin Yandex Zen
40 comments
Information
Dear reader, to leave comments on the publication, you must sign in.