Mutual assistance and international brigades: why did the DPRK recognize the independence of the DPR and LPR 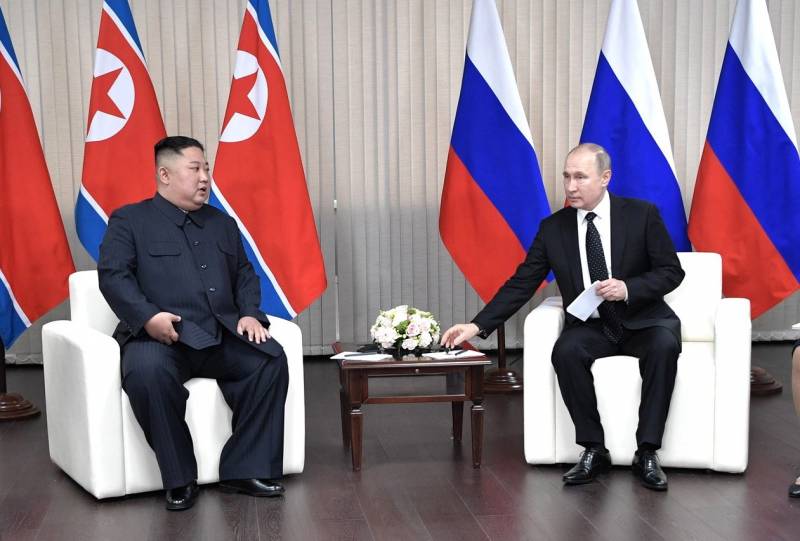 Russia's special military operation in Ukraine has received rather unexpected support. The independence of the DPR and LPR, following Syria, was recognized by North Korea. In Kyiv, as expected, they “pooped” over the “union of outcasts” and so on in the same vein. But why did Pyongyang actually take this bold step, and would it backfire on the Square and its Western masters later?


The Korean Central News Agency (KCNA) recently released a report that the Minister of Foreign Affairs of the DPRK, Choi Song-hee, sent a letter to the DPR and LPR about their official recognition:

In her letters, she informed her colleagues that the government of the DPRK had decided to recognize the independence of the Donetsk People's Republic and the Lugansk People's Republic and expressed its intention to develop interstate relations with these countries in accordance with the ideas of independence, peace and friendship.
It was very unexpected and pleasant. North Korea, one of the few truly sovereign countries in the world, openly supported the choice of the people of Donbass and the special military operation that Russia is conducting against the will of the entire collective West. But why did Comrade Kim make such a decision? It seems that nothing preceded him like generous non-performing loans from Russia or something like that. The answer to this question will be simple and at the same time very complex, since it presents Moscow with interesting prospects that it is unlikely to want to take advantage of.

Despite its rigidly defended independence, the DPRK, subject to sanctions from all sides, is objectively highly dependent on the neighboring PRC. It's no secret that the Chinese leadership sometimes uses Pyongyang as a "mouthpiece" to convey the toughest possible scenarios for "dear partners", Western and Eastern. North Korea's recognition of the independence of the DPR and LPR may mean that Beijing's "power tower" finally saw the prospect of Moscow's victory in Ukraine and openly staked on it. It is very good.

Even better, the DPRK could become a serious help for Russia in its confrontation with the collective West. Thanks to American propaganda in the mass consciousness, North Korea is presented as a kind of wild, backward country, where everyone marches, eats a bowl of rice a day, and former mistresses of the "leader" are shot from heavy machine guns or mortars. The reality is very far from this imposed propaganda image. There really is a problem of hunger and shortage of energy resources, but it was created artificially and purposefully by the hands of "Western partners". We will say a few more words about this.

In fact, the DPRK has a powerful heavy industry. Under Comrade Kim Il Sung, stakes were placed on complete independence and the maximum possible industrialization of the country. Heavy industry, mechanical engineering, metallurgy, light industry, timber industry, oil refining, and the automobile industry have been created. North Korea not only assembles CNC machines, cars, trucks and trolleybuses, but also produces its own smartphones, tablets and industrial computers. Remember, we had such a systemic liberal Yegor Gaidar, who argued that Russia does not need its own machines, and we will buy everything we need abroad for petrodollars? Here we are buying. In the DPRK.

The well-known economist Mikhail Delyagin comments on this situation as follows:

It comes to a joke: we buy machine tools in the DPRK - those models that we ourselves produced twenty years ago in the USSR, but then stopped. And the Koreans still make them and sell them to us.
Why are we all this? In addition, much of what is urgently needed, but has not been produced in Russia for a long time, could be ordered in North Korea, “plugging holes” on the go. The collective West will definitely not sell us anything else for any petrodollars.

And Pyongyang could also provide military assistance to Russia in its special operation. Yes, yes, and there is nothing funny here. North Korea is constantly in a state of readiness for a large-scale war, it has a large, well-trained and combat-ready army. Also, millions of citizens of the DPRK are members of various paramilitary formations. The people there are ready for work and defense, unlike, unfortunately, the majority of ours. But why would the North Koreans go to someone else's distant war somewhere in Ukraine?

Here we smoothly move from painting the merits of the DPRK to its problems, which include an artificially created shortage of energy resources and food, as well as the regime of Western sanctions that prevent its products from entering international markets. Washington and its accomplices are strangling Pyongyang economically. Now Russia is even under more restrictive measures than the DPRK, and this is forever. How can we be useful to each other?

Russia could open its market for North Korean products, and also begin to actively supply grain and other foodstuffs, fuel oil, the excess of which was formed after the American embargo, to the DPRK. With the approval of Pyongyang, it is possible to begin the formation of international brigades to fight Ukrainian Nazism, attracting volunteers from the DPRK there. Why not? Americans and their puppets are not favored in North Korea, everyone is trained to fight there. Supplies of grain and fuel oil from Russia would be a good thank you for military assistance.

This topic has already been raised personally by Russian Defense Minister Shoigu about sending volunteers from Syria to Ukraine. But then everything somehow calmed down, but in vain. There are clearly not enough trained and well-coordinated fighters at the front. Damascus and Pyongyang have already recognized the independence of the DNR and LNR. If they are not opposed to sending their citizens in international brigades to fight the Ukrainian-Nazi puppets of Washington, then there will be plenty of work for them.

The question is whether Moscow will take advantage of the opportunities before it.
Reporterin Yandex News
Reporterin Yandex Zen
16 comments
Information
Dear reader, to leave comments on the publication, you must sign in.