The economic crisis in Europe develops into a political one 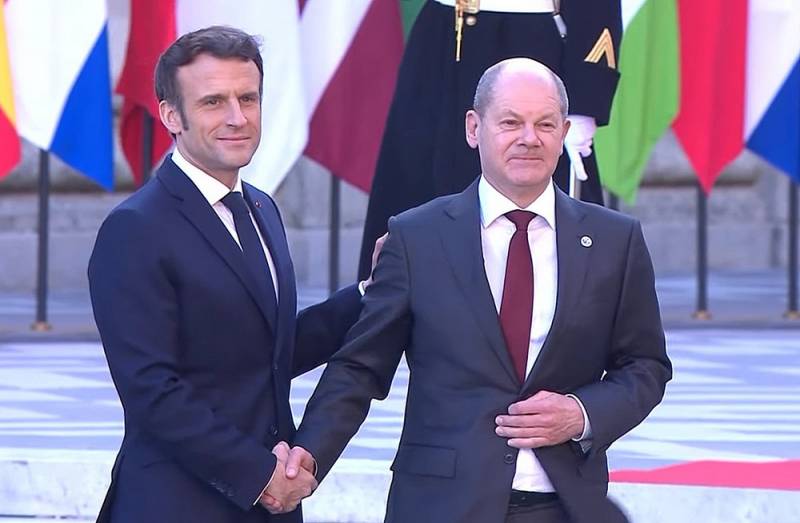 With the resignation of Boris Johnson, a nervous fuss began in the ranks of European leaders, who until recently were so united at the NATO summit. First, a sex scandal surfaced involving German Chancellor Scholz, then the French parliament tried to pass a vote of no confidence in the Macron government, now the ruling coalition in the Italian parliament is disintegrating before our eyes, and Prime Minister Draghi hurried to jump from this train. (And somewhere on the periphery Kaja Kallas, the Prime Minister of the useless Estonia, hastily resigned).


It's rather funny that this is happening against the backdrop of a whole series of fresh, it seems, overcame. While the Ukrainians, with the help of the young “god of war”, the great HIMARS, are destroying the “orks” by the thousands, Canada has agreed to return the Siemens turbine, which is so necessary for uninterrupted gas supply, and Ukrainian ports are officially starting mass grain exports. Russian capitulation is already on the horizon, Europe can sleep peacefully...

The talks in Istanbul on the "grain corridor" caused another wave of anxiety in Russian public opinion. Everything is according to the classics: “a new informational victory of Zelensky’s associates”, “The NWO are preparing to merge”, the plaster is removed, the client leaves.

What do we really have?

“Putin does not allow Ukrainian grain to be taken out”, “Putin provokes famine” are the most popular explanations in foreign propaganda for the jump in food prices. After all, everyone remembers these epic covers of foreign magazines, on which there are ears of corn with skulls instead of grains, or an equestrian Mongol setting fire to a grain field, right?

The reality, of course, is somewhat more complicated. The gallop in food prices is caused by the sum of many factors, including the shortage of Russian fertilizers, rising fuel prices, the pseudo-environmental agenda that continues to crush European farmers and, last but not least, the greed of international agricultural holdings. In addition, it is known that the export of grain from Ukraine by land has been successfully established, and although its pace is somewhat lower than through our own Ukrainian ports, the process is underway. At the very beginning of the summer, the Ukrainian and Western media were jumping for happiness about this: sideways, but still they manage to bypass the intrigues of the cruel famine-mongering Putin.

But this did not contribute to the stabilization of consumer prices in the West. Obviously, "unblocking ports" will not help either, at least not as much as the TV promises to the burghers. It is likely that advertising this “unblocking” will not even slow down the growth of public discontent, and a little later the information bubble of victory will burst again, which will anger the Western man in the street even more.

Exactly the same with gas.

Although, it is worth noting that the transition from an offensive on the southern flank to "grain negotiations" is still a necessary measure. By concentrating efforts and the most powerful of the imported weapons in this direction, the Nazis managed to achieve operational success and stop the advance of the Allied troops. However, at the same time, the Armed Forces of Ukraine themselves suddenly collapsed in the center, and the main onslaught of the Russian army was transferred there and to the adjacent northern flank. At the same time, the search began for the possibility of converting the military failure in the south into political victory - and it seems that they are not unsuccessful.

I really don't like the term "political judo", which Russian journalism likes to apply to the foreign policy of Russia and Putin personally, but now it is completely out of place.

As for the fears about a possible "draining of the operation", I consider them groundless. Here in March-May, while decisive successes were not yet achieved, there were reasons to be afraid - but now the situation has changed. It is obvious that both the Armed Forces of Ukraine and the pro-fascist part of Ukrainian society received their “Stalingrad syndrome”, and the further, the more painful this moral breakdown will be until it ends with a complete breakdown.

Kyiv has driven itself into a completely hopeless position. Surrender on Russian terms is unacceptable - there will be an internal explosion that will bury the fascist regime; but the continuation of the war - for the most part, also on Russian terms - will still bury the junta, only a little later. All that remains is to put forward fantastic demands for the complete withdrawal of Russian troops and the payment of reparations.

At the same time, in fact, Zelensky and Co. recognize exactly what the “new territorial realities” are, first turning off the population of the liberated territories from the Ukrainian economic and legal field (social payments are not transferred, communications are turned off, residents are automatically transferred to the status of “Orc collaborators”), and then shooting him with artillery. Obviously, there will be no "return under Nenka".

And although from a purely human point of view, I only want to wish the bloody clown and his team a speedy violent death, it’s hard not to admit that the use of these “useful idiots” for the leisurely vaccination against Ukrainianism of the broad masses of future Russian citizens brings results. However, not only future Russians.

As the living (still) classic said, not only everyone in Europe can look into tomorrow, in which broken bets on the Ukrainian fascists have grown into a lost war.

More precisely, not everyone is ready to accept such a prospect. Judging by the political platform of the candidates for the leadership of the Conservative Party of Great Britain, the positions of Macron and (to a lesser extent) Scholz, they still cherish some hope for the capitulation of Russia. It is understandable: it is already too late for the European leaders themselves to rush about, none of their steps will prevent a cold, in every possible sense, winter; and the refusal to confront will mean that all the expenses and reputational losses were in vain.

But, as for Ukraine, for Europe, further support for the war is also fraught with a grandiose shock - a little (by several months) later, but much more destructive. So far, the “political pendulum” that has been brought to the Ukrainian side threatens to only change the course of the states to a new one, and throw the direct conductors of the current course to the sidelines in the reverse movement.

If this pendulum reaches its end, then, swinging back, it can sweep the European Union like a triangle of skittles, or even split individual national states into pieces. Accordingly, the current attempts to remove failed governments “by law” will give way to forceful methods, and instead of votes of no confidence, politicians will have the opportunity to run into a bullet or a bomb.

So far, the Western opposition elites (we are talking about the owners of industrial capital, who will lose the most because of the Ukrainian problem, and their lobbyists in politics) are in no hurry to break the situation through the knee: after all, a civil war is a risky event. However, the likelihood that the tycoons will choose it is far from zero: as I have already said in one of the previous posts, for this there are not only prerequisites, but also resources and personnel. In the fall, when "rolling blackouts" become a reality, the conditional "Putschist Party" will receive broad support from the embittered population.

Even if such an extreme option is not reached, squabbles between members of the “European family” over the meager reserves of energy resources are absolutely inevitable. The COVID-19 pandemic has already shown what the tales of “solidarity” are worth in a crisis situation, and how (un)capable the supranational structures of the EU are of managing in such conditions.

So the most cunning of European politicians do the right thing, that they collect little things in advance, otherwise something might not work out. Whether their fears are justified, we will find out very soon.
Reporterin Yandex News
Reporterin Yandex Zen
5 comments
Information
Dear reader, to leave comments on the publication, you must sign in.