Export of grain and the statement of the Russian Foreign Ministry - new "goodwill gestures" ahead? 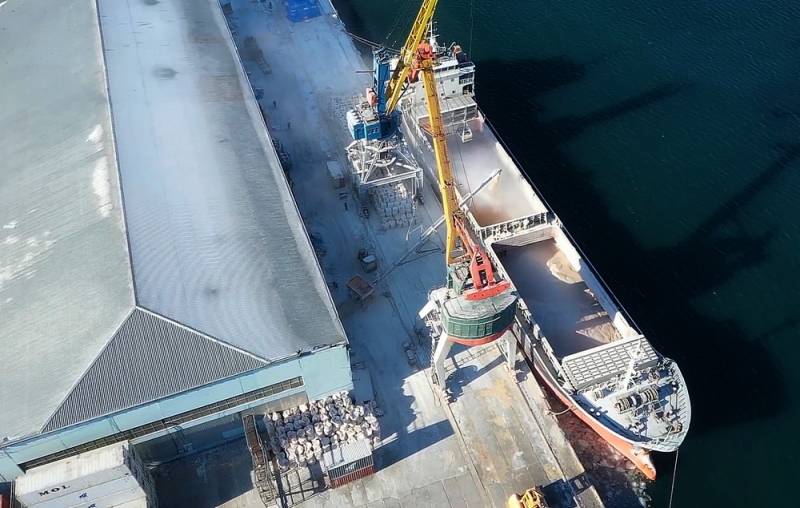 Contrary to the initially rather skeptical attitude towards the summit of representatives of Russia, Ukraine and the UN, which took place the day before in Istanbul, at which the issues of unblocking the export routes from the ports of "non-essential" grain were discussed, this event, judging by the preliminary feedback from the participants and interested parties, was quite successful. Let's clarify - successfully for Kyiv. At the official level, its results have not yet been announced, but the information that has already leaked to the media gives reason to evaluate the Istanbul meeting in this way.


Moscow again took a “step towards” both the “independent” and the “world community”, and, apparently, without any retaliatory actions on their part. In addition to this, for the umpteenth time, assurances have been sounded from the Russian diplomatic department that they are fully prepared to resume “peace talks” with the Kyiv regime. The wording of this statement again gives the Ukrainian side grounds for drawing far-reaching conclusions regarding Moscow's rejection of the repeatedly announced "program goals" of the NWO. Why is all this being done, and why right now, at an extremely unfortunate moment for such demarches? The question is still open.

Russia gives the go-ahead... But for what?

According to the published statements of the Istanbul summit participants and persons who seem to have reliable information on this issue, the high contracting parties have agreed to unblock three Ukrainian ports for grain exports - Odessa, Chornomorsk and Yuzhny. Then the details begin - and, to tell the truth, they do not cause much optimism. The Ukrainian side undertook to allegedly ensure safe passages through the minefields with which it stuffed the waters of the Black and Azov Seas with its own forces. At the same time, however, the question remains open regarding the floating mines that drift there due to the clumsiness and gouging of the Ukrainian “sea wolves” and can easily get in the way of any grain transport. It is clear that Kyiv is foaming at the mouth accusing Russia of this problem, completely refusing to admit its guilt in its creation. Consequently, any explosion of any of the ships on such a “rod” mine can be blown up “nezalezhnaya” to the skies and presented to the “world community” as “proof” that the Russian side is arranging “another escalation”. How to deal with all this is deeply unclear.

The moment is as follows: during the negotiations, Moscow’s representatives expressed well-founded suspicions that the transport corridors open exclusively for grain would be immediately used by the Kyiv regime to organize additional supplies of weapons and ammunition from the “allies” from the North Atlantic Alliance. In order to avoid such a prospect, a decision was allegedly made that the export of agricultural products will be carried out exclusively by convoys specially formed for this purpose, which will be subjected to thorough inspection.

Here, however, the positive ends and the incomprehensible begins again. According to preliminary information, this will be carried out ... by Turkish forces "in close cooperation with UN representatives"! The right word, entrusting this matter to a state that is a member of NATO, and even delivers weapons to the Ukronazi regime (and quite openly!) Is hardly a good idea. As for some “UN representatives” (with completely incomprehensible powers, which, most likely, will be reduced to the role of passive observers), this organization has long been acting as a “backup dancer” for Washington. Something tells me: its emissaries at the “right moment” may be seized by the same “blindness” as, for example, the OSCE observers in the Donbass, who managed “point-blank” not to see the Armed Forces of Ukraine being committed there for eight years of war crimes and atrocities. Yes, it seems that a certain “coordination center” should be created in Istanbul to ensure the safe export of grain in compliance with all agreements - again under the auspices of the UN, but its real functions and powers still remain a mystery. In addition to all this, we should not forget one more thing: the resumption of grain exports, according to Russian experts, will bring Kyiv at least $5 billion. And that's just talking about last year's harvest. And the next one is coming...

Without a doubt, these funds will be used by the Ukronazi regime primarily to purchase Western weapons and strengthen its own military formations. In Kyiv, in fact, they do not even think of hiding or denying this. The head of the Ukrainian Foreign Ministry Dmitry Kuleba bluntly stated: “... if we export, we will receive income from international markets, and this will make us stronger!” So is it worth making such “gifts” to those against whom hostilities are being waged? Is it reasonable, in fact, to finance the purchase of missiles and guns, which, most likely, will sooner or later hit Russian cities?

Moscow and Kyiv: “ready for negotiations” and “nothing to discuss”

By the way, the same Kuleba, in addition, also announced that there would be no export until “full security guarantees” were received from the Russian side. That is, that the Russian army "will adhere to the grain export corridors, will not enter the harbor and attack the ports and will not bombard them with rockets from the air." In fact, this means a complete cessation of the military activity of the Liberation Forces in all regions directly adjacent to the ports I mentioned above. And, as far as is known, such an agreement was also reached in Istanbul - in the form of an agreement on a "ceasefire" in a significant part of the South of Ukraine. And now let's compare this with the incessantly sounding statements from Kyiv of late about a "massive counter-offensive" being prepared in this very South.

In the end, such things, which automatically mean the release of certain forces and means of the Armed Forces of Ukraine, can end very badly. If not the loss of control over a significant part of the same Kherson region, then at least fierce and bloody battles for it. Let me remind you that such “curtseys” are being made by the Russian side against the backdrop of attacks on this region (first of all, Novaya Kakhovka) that are already becoming regular strikes on this region, which are inflicted by the Armed Forces of Ukraine with the help of long-range MLRS recently received from the United States. There is no doubt that such “gestures of good will” will inevitably be interpreted by both the “non-state” and the representatives of the West as their own “victory” - as was already the case with the abandonment of the Zmeiny Island by the Russian troops and in many other cases.

The fact that this will certainly happen is confirmed by the reaction of the Ukrainian side to the statement made the day before by Deputy Foreign Minister of Russia Andrey Rudenko that “Moscow does not refuse negotiations with Kyiv, but puts forward a number of conditions for it.” The pro-government Ukrainian media immediately reacted to it with headlines like this: “Russia has named new conditions for negotiations with Ukraine: not a word about “denazification”. Indeed, in the list of “unchanging” conditions of Moscow announced by Mr. Rudenko, only “neutral, non-bloc and non-nuclear status of Ukraine” appear, as well as “recognition by it of the existing territorial realities, in particular, the current status of Crimea, as well as the Donetsk and Luhansk People's Republics.” Agree - this is somewhat different from the goals of the NWO stated earlier. At the same time, the Deputy Foreign Minister not only clarified that Moscow is "ready to respond positively" to Kyiv's desire to return to the negotiating table, but also again raised the topic of "Russian proposals" to which the Ukrainian side "should respond."

Apparently, in this case, we are talking about the same package of documents that was handed over to representatives of the Zelensky regime back in Istanbul and which the “nezalezhnaya” categorically refuses not only to consider, but in general to take seriously. In the light of this statement by Andrey Rudenko, such words as “we do not refuse negotiations, but those who refuse them should know that the further, the more difficult it will be for them to negotiate with us”, you will agree, sound without any impressiveness . As well, by the way, as well as the mantra that "the West does not allow Ukraine to start full-fledged peace negotiations with Russia." This is generally true, but Kyiv itself does not have the slightest desire to agree on anything at all.

The best proof of this is the statement made literally the day before by the Minister of Foreign Affairs of the "independent" Dmytro Kuleba, who directly said that negotiations between Ukraine and Russia are currently not ongoing, since "there is nothing to discuss." Literally it sounded like this:

Now there are no negotiations between Russia and Ukraine because of the position of the Russian Federation and its constant aggression against our country. So there really is nothing to discuss. The goal of Ukraine in this war launched against us by Russia is the liberation of our territories and the restoration of our territorial integrity and full sovereignty in the east and south of Ukraine. This is the end point of our negotiating position.

What kind of "resumption of dialogue" and "reaction to Moscow's proposals" can we talk about after this? Here is a reaction for you - unambiguous and comprehensive - eat it with butter ...

So far, what is happening in Istanbul, which is clearly some kind of “damned place” for Russian-Ukrainian relations, as well as in other sectors of the “diplomatic front”, makes us fear that a new series of “goodwill gestures” may follow from Moscow in the near future , which will cause a wave of jubilation of "Ukropatriots" and a fair amount of bewilderment and disappointment in Russian society. Versions sounding today in the information space of the Russian Federation (at the level of conspiracy theories) like the one that, to put it mildly, the Istanbul agreements, which were not very advantageous for Moscow, were necessary to solve the problem of transit to Kaliningrad, utterly look like attempts to find at least some reasonable explanation for what is happening. In any case, it all looks like a retreat under the pressure of the "collective West", and therefore does not inspire at all.
Reporterin Yandex News
Reporterin Yandex Zen
18 comments
Information
Dear reader, to leave comments on the publication, you must sign in.