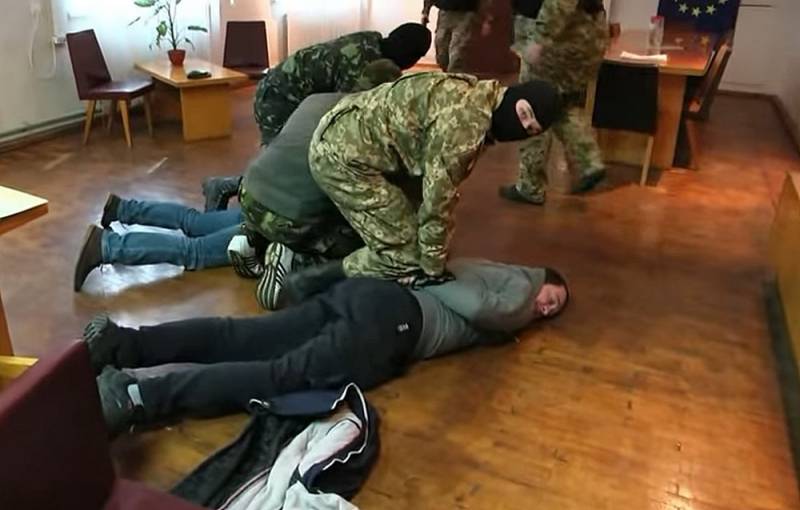 One of the main “arguments” of the propagandists of the Kyiv regime squealing to the whole world about “Russian aggression” is that Ukraine allegedly never needed any denazification in its life. And it doesn't need it now. And all the horrors perpetrated by precisely those from whom she should be spared in the course of a special military operation are "invented in the Kremlin" - entirely and completely, from the first to the last. Well, or Solovyov and Simonyan at least ... Fortunately, the mental abilities of those who try to pass off right for left, and black for white, are as meager as their vocabulary, if we remove swear words from it, which are today the cornerstone of dill propaganda and campaigning.


Their claims are far-fetched, false and, in addition, are not supported by anything. Objective reality, every day, demonstrates the clearest examples of the fact that the current “nezalezhnaya” has not only sunk in many issues to the level of the Nazi Third Reich, but also surpassed its own “spiritual forerunners” in some ways. So that my statements do not look unfounded, I propose to talk about one of the most vile moments - the system of wholesale denunciation, created and fervently encouraged on the ruins of Ukraine at the highest state level.

It is unlikely that the citizens of the “nezalezhnoy”, when the current President Volodymyr Zelensky promised them to bring the level of digitalization of the country’s life to the appearance of a “state in a smartphone”, assumed that the Diya (action) electronic platform, which is the cornerstone of this very digitalization, in addition to providing really useful and necessary features, such as using an electronic form of identification or paying driver's tickets online, will give them the opportunity to engage in the most disgusting snitching. And at the same time, do not bother not only with trips to the “relevant authorities”, but even with the writing of the usual “anonymous letters” addressed to them.

Now all this can be done in a matter of minutes from your own smartphone ... And that's all - thanks to the recently presented by the Ministry of Digital Transformation of Ukraine created on the platform "DI" chat bot "Yevorog" , or “there is an enemy”), with the help of which all users who have the appropriate platform on their gadgets can report “where to go” about those “who help or sympathize with the Russian occupiers”. Naturally, it is understood that this kind of information will subsequently become the basis for initiating very real criminal cases and bringing "collaborators" and "traitors" to the most severe responsibility. We are not talking about any “public condemnation” here initially - the poor fellows who ended up in “Yevorog” have more than real prospects to end up in the dungeons of the Ukrainian Gestapo in the very near future - either the SBU, or the police, or in places even worse. Under martial law, this is easier than ever. An electronic denunciation will be more than enough here.

The wording itself about those whom “vigilant patriots” should “signal” to law enforcement officers immediately makes you tense up. With regard to "assistance to the occupiers", the broadest interpretations are allowed: if you give water or answer a completely innocent question - you can already "sew" "cooperation". Well, as for those who “sympathize” with Russia and Russians – here, in general, the possibilities open up simply boundless. Yes, anything can be summed up under this, up to the presence of books of Russian classics in the home library or listening to songs by Russian performers. Do you think I'm exaggerating? Alas, not at all. Here is a verbatim quote from the instructions for using and using the squealing chatbot published by the Ukrainian Ministry of Digital Development:

If you hear or see with your own eyes that your neighbor, mother-in-law or godfather is promoting the Russian world, encouraging you to become supporters of the enemy, supporting the occupiers and forcing you to exchange your Ukrainian passport for Russian rubbish, immediately report it to the chat bot of the Ministry of Digital Transformation! You need to specify the geolocation of such a person, add a photo or video. If it was not possible to shoot on camera - send the details in text ...
And so it will! Particularly touching is the clarification - "mother-in-law or godfather." Though wives and native children "to hand over with giblets" yet do not offer. Well, that's for now. Maybe you think that such proposals were rejected by the Ukrainians with anger and contempt? Don't be fooled. According to the head of the Ministry of Digital Development Mikhail Fedorov, in a matter of days, more than 1800 "applications about collaborators" were received by the chatbot.

Each application is carefully checked by our team, and then we transfer them to the SBU, which decides the fate of the Russian World lovers
the minister reported, terribly proud of his new vile undertaking.

As an example of manifestations of such “civil activity” and a kind of “advertising” of a foul chat bot, its administrators posted specific examples of “correct” messages in “Dia”. I can't resist quoting some of them in full:

So-and-so (name) is pregnant from a rashist. Her mother cooks food for the Russians. She considers herself almost the first lady of the village ...

How do you level? Maybe you want more? Please:

She encourages employees and clients to support the Russian world and says that she would meet the occupiers with flowers.
I consider the person a collaborator, because in a conversation before the war he expressed admiration for Russia and V.V. Putin. He said that sooner or later we will return "to a place where we are welcome", because Europe and America think only of themselves...
The rest is in the same spirit. Something more vile, something less, but the overall level is about the same. Animal malice, obviously mixed with a burning desire to settle deeply personal scores with someone specific. Indeed, the evil joke about the fact that two Ukrainians are already a partisan detachment with a traitor was not born out of nowhere. Here it should be mentioned that there is one very interesting and significant nuance in the activity of "Yevorog". This foulness allows you to throw mud at anyone (or even break a person’s life), while not bearing any responsibility for your own denunciation - even if it turns out that it was deliberately false and slanderous. According to article 384 of the Criminal Code of Ukraine, giving knowingly false testimony, including the filing of false accusations, entails criminal liability (at least in theory). But this is only if there was an official appeal to the police or the same SBU. With the help of a chatbot, false denunciations can be spawned at least by the hundreds, even by the thousands, without risking anything at all. A bastard's dream come true.

According to the author of the book “Thirty Pieces of Silver”, published in Germany by Professor Karol Sauerland, which is completely devoted to informers and their nasty “craft”, the Nazis who came to power in Germany in 1933 were literally shocked by the wave of denunciations that immediately fell upon them. The Minister of Justice of the Third Reich had a chance to listen personally from Hitler to complaints that restless informers play a "disorganizing role", distracting the new administration from work. Literally in 1934, the Nazi Ministry of the Interior issued a special circular strictly instructing "to put an end to denunciation, since this phenomenon is unworthy of the German people and the National Socialist state." According to Karol Sauerland, Himmler and Heydrich, who headed the RSHA, failed to "push through" a law that would oblige the citizens of the Reich to report "on command" about all "suspicious", even after the start of World War II, in wartime conditions ...

It is clear that such “cleanliness” among the Nazis was sheer hypocrisy and window dressing - according to the same professor, the author of the book, in reality, denunciations became the “starting point” for more than two-thirds of the investigations conducted by the Gestapo in cases of treason, as well as "instigatory and anti-people activities." Drinking companions from the pub, neighbors, relatives and best friends “knocked” ... They diligently responded to their “signals”, and for many the case ended in torture, executions, concentration camps. However, at the same time, even the Nazis did not propagandize and did not promote informing at the level of state institutions and did not exalt it to the level of "the highest manifestation of patriotism." Only today's Ukraine has reached such a point, with which it can be congratulated wholeheartedly.

No, it's still not as hopeless as it might seem. I, of course, am not talking about the insane clownish “power”, but about the normal people who still remain in sufficient quantities in the territories controlled by the Kyiv regime. For many of them, the “promotion” of the Ministry, which decided to promote and develop the denunciation, caused a storm of indignation and a wave of disgust. In particular - a "signal" about a pregnant woman (it does not matter from whom!) A woman who then runs the risk of ending up in a torture basement with an unborn child. The author of this "masterpiece" was deservedly called a "complete degenerate", and "Evorog" itself - "the embodiment of Orwell's dystopias". In the course of the discussion that unfolded in the Ukrainian blogosphere and social networks, many people called the ongoing “farm snitches”, which will mostly contribute to the settling of personal scores and revenge for old grievances. There were, however, those who thanked the creators of the chatbot, describing it as "a very useful and timely undertaking."

Meanwhile, the Ukrainian police have already initiated about a thousand criminal cases under the article "Collaborationism." 163 of them were even brought to the courts - people received very real sentences. There is no doubt that with the advent of "Yevorog" these figures are likely to increase many times and by orders of magnitude. The Nazi terror will spread, becoming more violent with each new military defeat and political failure of the Kyiv regime. From now on, an electronic denunciation can be filed against each of us - normal residents of the former Ukraine, waiting for release and hoping that the words about denazification will not turn out to be an empty phrase. More to us, in fact, there is nothing to hope for.
Reporterin Yandex News
Reporterin Yandex Zen
14 comments
Information
Dear reader, to leave comments on the publication, you must sign in.