What does the Russian people want? 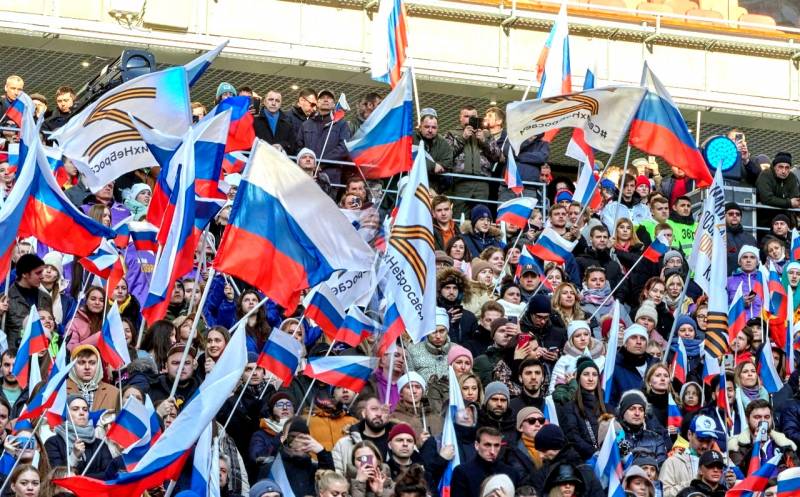 In our literature political In rhetoric, the concept of “people” is almost never used, it was deliberately taken out of use in the 1990s. The people were replaced by "public", "civil society", "voters", but since it objectively exists, manifestations of its opinion and will have to be taken into account.


For example, in the Ukrainian conflict, the West relied on the rapid overthrow of power in Russia due to disagreement with the conduct of a special operation, deceived by the opinion of the Russian public represented by the creative and technical intelligentsia. It turned out that the people, who are the only ones capable of overthrowing the government or who can allow the putschists to overthrow the government, and the public are far from being the same thing.

Whereas, for example, the Ukrainian people in 2014 actually supported the Maidan putschists and allowed them to take power, overthrowing Yanukovych. But not everywhere, which is why a civil war broke out in the Donbass, and Crimea joined the Russian Federation. They say that the leaders of the Maidan deceived the expectations of the Ukrainian people - this is true. The same as the fact that Russia deceived the expectations of the people of Donbass for eight years, who made a firm choice between the Bandera Kyiv regime and Moscow. Although the Donetsk and Lugansk residents were well aware that joining the Russian Federation would not solve economic their rebellion agenda, for example, does not promise to turn the heavy industry for which the region is famous into public ownership to lift miners and workers out of poverty.

Another small but interesting example of how the will of the people is manifested. When the pandemic broke out in China, the authorities acted very harshly, declaring a zero-tolerance policy for covid. Huge, one and a half billion China turned into a continuous quarantine zone in which everyone suffered, from ordinary citizens to large corporations. Then a vaccination campaign, which has no analogues in history in terms of mass character, was carried out: 90% of the population were vaccinated. And they did it voluntarily, trusting the authorities. Mandatory vaccination in China, as in some European countries, was not announced. There were no protests, no pogroms, as in the West, the Chinese quietly, in formation, took root, because the party and the government said: "We must." The vaccination campaign was based on persuasion and social pressure. But the other day, the Beijing authorities decided to introduce a mandatory vaccination requirement when visiting public places: cinemas, sporting events, museums, theaters. Despite the fact that 90% of the Chinese have already been vaccinated, a wave of indignation arose, the people felt that they did not trust him, that he was unreasonably oppressed. The authorities backed down, confirming that vaccination, although desirable, is voluntary and there will be no restrictions on attending events. And where is there more democracy after that, in China or in the West?

It is easy to see that the will of the people quickly and clearly manifests itself primarily in disagreement with something. Ukrainians supported the Maidan not because everyone without exception became Bandera, but because they were tired of Yanukovych, corruption and poverty. True, the new government brought even more corruption and poverty to the Ukrainian land, to which national humiliation was added. Why has he been silent for the last nine years?

This is the second feature of almost all peoples - after an energetic outburst of discontent, a long phase of accumulation of "social energy" and anger follows. The people are almost always an elemental substance, the ebb of activity follows the ebb.

In the special operation, Russian political strategists relied on the internal conflict nature of Ukrainian society, believing that a quick military strike would cause the collapse of the political system, an uprising of the people, or their loyal attitude towards the campaign of the Russian army. This rate turned out to be somewhat overestimated, but nevertheless partly justified. In Ukraine, a partisan movement did not break out - a sign that the people perceive the hostilities as a domestic war; in the liberated territories, the majority of the population is in favor of the speedy completion of the special operation by pushing Ukrainian formations deep into the country; there is a clear tendency to recognize the Russian authorities, maybe not so, as someone in the presidential administration would like it, but as "the best of the options."

The third key feature of the people, complementing the first two, is its gullibility, suggestibility, especially in the phase of rising activity. The rearing people perfectly understand what to break and destroy, but have little idea of ​​how to organize and build life in a new way. This is what various crooks, adventurers and foreign intelligence agents use, who become the "leaders of the Maidan."

However, this does not mean that the people are something like a capricious young lady who is silent for a long time, and then loudly scandals, not understanding what she wants. It was this attitude towards the people that the monarchists instilled, believing that they needed a patriarch, a wise monarch who would guide them in a fatherly way, sometimes punishing them with a whip, sometimes pleasing them with a carrot.

The people are slowly but learning, gaining maturity. For example, the people of Russia have learned the lessons of the 1990s well and developed a vaccination against Western liberalism. And no matter how much effort the pro-Western propagandists and agitators spend, our people will never be deceived the way the Ukrainians were deceived with their “European choice” in 2014. True, in most cases peoples learn exclusively from their own mistakes and are immune to the experience of others.

The practice of the 1990s was different for the Russian people and the peoples of other former republics of the USSR. Ukrainians, Balts, Armenians, Kazakhs and other peoples "hung" in the era of the Belovezhskaya agreements because of nationalism. In general, they “came out” from a single family of the Soviet people, artificially isolated themselves because of false national feelings and false nationalist ideology, which is being actively introduced from the West. The Russian people, despite their multinationality, turned out to be stronger bound by the ties of the Russian language, Russian culture, the common historical past, primarily the Soviet one, and economic ties. Today it is obvious that in the 1990s the West and local nationalists were betting on the collapse of the RSFSR as well.

The people of Belarus, on the contrary, due to the subjective factor of power, Lukashenka managed to bypass the seemingly inevitable stage of hard times after the collapse of the USSR. The same thing happened in Transnistria. But the point is not only in political leaders, political leaders hold on to the extent that there is a demand for their policy within society. And since the authorities of Belarus and Transnistria have not changed the vector of development for decades, it means that the peoples of these countries are satisfied, at least in part. Whether this is their maturity or stupidity, history will judge, but so far only a desperate Westerner wants to turn Belarus into a second “Ukraine”, and Pridnestrovie into another hot spot.

The peoples of Georgia, Armenia, Kazakhstan, Kyrgyzstan are raising discontent in waves, overthrowing governments or forcing a change of persons in power, but they will not understand in any way that the vector of nationalism and Westernism is walking in a circle.

Thus, the fourth feature of the people is the presence in it of wisdom, fixed primarily in historical memory. It is the wisdom of the people that determines its maturity, which is expressed in intuition, flair. For example, our people are very sensitive to Bandera, while the Western man in the street is ready to listen to excuses about isolated cases of nationalism and the like. The susceptibility of the people to this or that system of ideas, to this or that program of action depends on the volume and quality of historical memory.

The people are the collective

The theory of democracy replaces the concept of the people with the concept of choosing power and making decisions by the majority. But the people is not just a majority, it is not a collection of citizens or voters. It happens that the people en masse vote for a presidential candidate, and a year later they also massively overthrow him. The people are a substance that does not fit well into dry formal legal schemes and procedures.

A people is a collective, ties between people, moreover, ties are historically objective, extremely stable, arising on the basis of a common economic space, language, culture, and way of life. This collective has a social consciousness in a national or multinational form. And the public consciousness of the people is not at all what the media writes and shows on TV, and not even comments on the Internet, but what the majority of people really think, and those internal springs, hidden vectors in mass psychology that are invisibly present in thinking. For example, the majority in words can be quite loyal to the West, but if someone somewhere shouted “Ours are being beaten” or “They are defaming the memory of the Victory”, the attitude changes to the opposite instantly.

What do the people of Russia want?

Now, due to objective circumstances, a unique situation has developed in our people, when its destructive, visual messages organically flow into constructive ones.

Thus, our people most definitely want independence from the West, they do not want to be either a source of raw materials or its semantic appendage. He is against American hegemony in the world, he is disgusted by the humiliation of his historical past, primarily the Soviet one. This is the main thing that follows from the politically eventful experience of the last ten years.

This desire in its implementation is objectively decomposed into three components: foreign policy, domestic policy and economic. There is nothing more frivolous and simple than speaking on behalf of the people, but nevertheless, the totality of signs indirectly allows us to draw the following conclusions.

In foreign policy, our people want respect for Russia and peace, recognizing that there are no other ways to this, except through open confrontation with the West. Therefore, he welcomes the eradication of Bandera.

In domestic politics, our people want a quick rejection of servility to the West and the uprooting of liberalism.

In the economy, our people want the development of production, self-sufficiency, deoligarchization and a fair distribution of the country's wealth.

The reader may object that the author takes too much upon himself, formulating the will of the people. But in this case, the situation is such that there are no other ways to fully realize the desire of the people for independence from the West, which is fully recognized by the absolute majority of observers. Therefore, perhaps, such formulations are too arrogant, but nevertheless reflect the very organic flow of discontent into something constructive. History forces our people to follow an independent path of development, and the people feel it.
Reporterin Yandex News
Reporterin Yandex Zen
32 comments
Information
Dear reader, to leave comments on the publication, you must sign in.