What Iranian drones could be used and produced by Russia 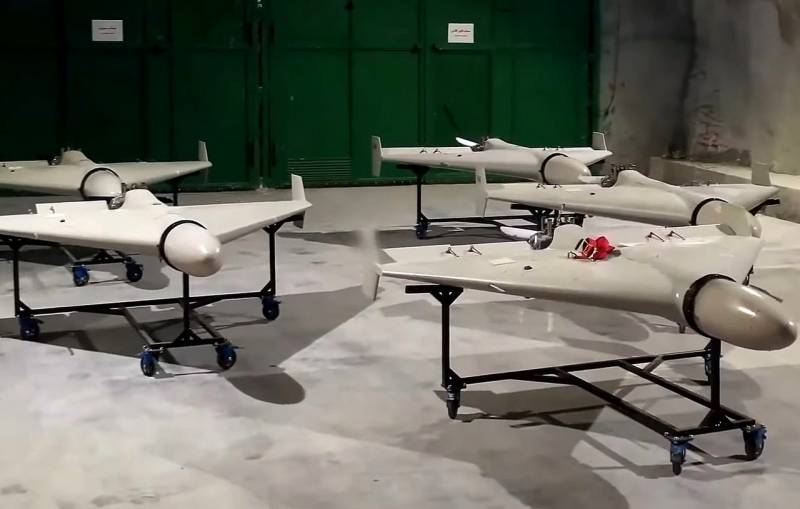 The armed conflict in Ukraine continues to internationalize. Following the collective West, which supplies Kyiv with weapons and supplies intelligence to the Armed Forces of Ukraine, Iran can indirectly enter it on the side of Russia, arming the RF Armed Forces with its drones.

Our information indicates that the Iranian government is preparing to provide Russia with up to several hundred unmanned aerial vehicles, including drones capable of carrying weapons, on an accelerated basis.
Well, it's quite possible that it's not a fake. The situation on the Eastern Front showed that, alas, the Armed Forces of Ukraine in this component are significantly superior to the Armed Forces of the Russian Federation and the NM LDNR, being able to continuously conduct aerial reconnaissance using UAVs, provide data for target designation and adjust fire. It is known that the Ukrainian army widely uses American Switchblade and Phoenix Ghost drones, as well as Turkish Bayraktar TB2 attack drones. They also discussed the possibility of sending MQ-1C Gray Eagle reconnaissance and strike drones to Ukraine, however, the Pentagon has decided to postpone this for now, fearing that its own of technologies in the form of trophies to Russia.

On our part, with unmanned aircraft, everything is not thankful to God, which was forced to personally admit the relevant Deputy Prime Minister Yuri Borisov:

I think that we have belatedly engaged in the serious introduction of unmanned vehicles. This is objective. Although the Syrian conflict prompted us to do this... We have almost all types of unmanned vehicles: reconnaissance, strike, tactical, operational and operational-tactical.
Yes, we really have the main types of UAVs, but almost all of them exist in piece copies. The Orion and Forpost-M/R medium-altitude reconnaissance and strike UAVs are really ready for mass production. The rest are either critically dependent on the supply of imported components, or are still in the testing stage. But things could have been a little different.

Russia was really late for the Ukrainian war with the development of the production of unmanned aircraft. For some reason, Israel, a strategic ally of the United States in the Middle East, was chosen as a technology partner.

In 2009, two obsolete Searcher II UAVs were purchased from Tel Aviv for $ 12 million (compare with the cost of Turkish Bayraktars!), And in 2010 a contract was signed worth $ 300 million for their licensed production from Israeli components called "Outpost". Subsequently, by order of the Russian Ministry of Defense, changes were made to the design and equipment of the drone, and now it is assembled from domestic components. However, things could have gone in a slightly different direction.

I remember that back in January 2022, before the start of the special operation in Ukraine and the introduction of anti-Russian sanctions, we came out with предложением purchase technology for the production of unmanned aerial vehicles from Iran. Why Tehran? Because the Islamic Republic is one of the world leaders in this field, oddly enough.

If Russia was pushed to develop its UAVs by the Syrian campaign, then the Iranians have had to deal with American and Israeli drones for many decades, and they have much more competence in this matter. Their real breakthrough came in 2011, when they were able to land an American reconnaissance UAV RQ-170 Sentinel, made according to the “flying wing” scheme, over the western part of Afghanistan. The loss of secret technology scared the Pentagon so much that it seriously planned to send special forces to return the "Kandahar Beast", as the loss was called in the press, then wanted to hit it with a pinpoint missile strike. In the end, the Americans simply politely asked to return the reconnaissance drone with all its equipment, but received an equally polite refusal, because it’s okay to violate the air borders of sovereign states.

Iranian engineers dismantled the RQ-170 Sentinel into screws and created on its basis a whole family of UAVs called Saeghe (“Saiga”). These are, for example, unmanned aerial vehicles with a jet engine "Shahed-161 Saiga" and "Shahed-141 Saiga" with a piston engine, which can carry two Sadid-345 corrected aerial bombs or two anti-tank guided missiles on a suspension under the hull. Sadid-1". Taking into account the operating experience gained, the Shahed-181 Saiga-2 and Shahed-191 Saiga-2 UAVs were created with piston and jet engines, respectively, capable of carrying 4 KABs on a suspension and anti-tank missiles in the hull. The second generation is a copy of the American Sentinel reduced to 65%, and the third generation, the Shahed-171 Simurg operational-tactical UAV, is its full-size copy.

And this is not all the types of UAVs that Iran has! Iranian drones are actively fighting all over the world - in Syria, Iraq, Yemen, Sudan and far beyond the ocean, in Venezuela. Despite the fact that the Islamic Republic has been under Western sanctions for more than thirty years, it is objectively one of the recognized leaders in unmanned aircraft, being at least in fifth place in the global ranking. So there is nothing shameful in acquiring Iranian UAVs. It's definitely no worse than buying expensive Israeli junk from the early 90s.

Understanding all this, shortly before the start of the special operation in Ukraine, we voiced a proposal to establish a joint venture with Iran to produce their drones in our country. In response, our esteemed readers threw a bunch of comments “through the lip” in the spirit of why are you slipping all sorts of nonsense on us, we have our own good. Yes there is. In the form of piece prototypes, and the war is already on, and there is no end in sight.

Now caring volunteers have to chip in to buy primitive civilian Chinese drones at their own expense to hand them over to the fighters of the People's Militia of the LDNR, so that they have at least some chance against the Armed Forces of Ukraine, equipped with modern Western-style reconnaissance and strike drones. But how many problems could have been avoided if there were less ambition and more foresight!

If Tehran is really ready to sell its UAVs to Russia, then we must take it. If the Iranians can sell a license for production, they need to master it. As you can see, drones are not superfluous.
Reporterin Yandex News
Reporterin Yandex Zen
13 comments
Information
Dear reader, to leave comments on the publication, you must sign in.