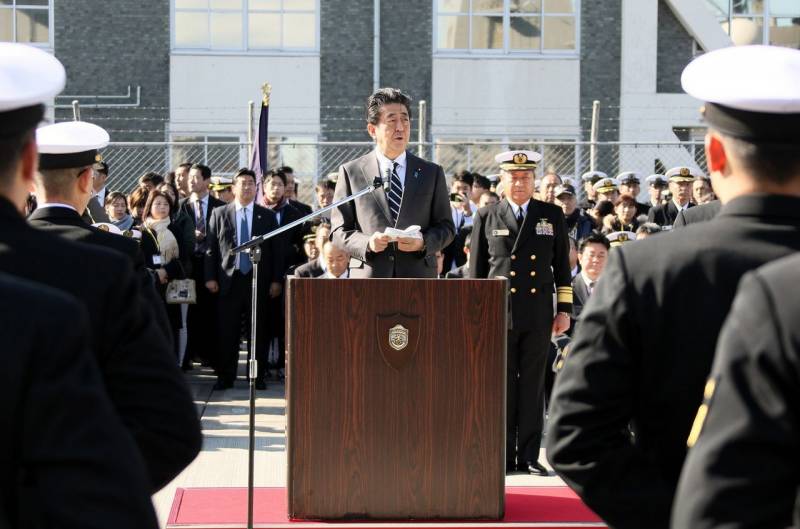 The assassination of Shinzo Abe really thundered: after all, prime ministers are not killed every day, even in Central Africa, not to mention more favorable places to live. Yes, and the person was high-flying and big ambitions, a kind of Japanese "Sultan Erdogan".


The motive called by the lone shooter seems all the more absurd: Abe paid the price for his connections with the sect, to which the killer's mother gave all her meager fortune.

But in fact, the presence of bridges between the deceased and the so-called "Unification Church" is not an invention, although a serious simplification. However, this "Church" was not the only interesting organization with which Abe closely cooperated.

To begin with, it is worth saying that Shinzo Abe has become a Japanese luminary policy not only (and perhaps not so much) due to personal talents and hard work, but also due to origin.

The founder of the political dynasty, the grandfather of Shinzo Abe, Nobusuke Kishi is a very curious character. Even before World War II, he managed to be the de facto Minister of Industry of the pro-Japanese puppet state of Manchukuo, was one of those who signed the act declaring war on the United States, and during it was the Minister of Commerce and was responsible for the production of ammunition. For these merits, the American occupation administration awarded Kisi with the honorary title of class “A” war criminal, but he escaped with three years in prison, and already in 1952 he returned to politics, and in 1957 he became prime minister.

At this point, Nobusuke Kishi did much to loosen the restrictions imposed on Japan after the war and revise the "vassalage" treaty before the United States. However, not everyone liked Kisi's authoritarian methods, even in his own Liberal Democratic Party, as well as his desire to stay longer in the premier's chair.

Shortly before his resignation in 1960, Kishi... almost became a victim of an assassination attempt: an elderly man inflicted six knife wounds to the prime minister in the thigh. The failed killer-right-wing radical called dissatisfaction with the political course of the Prime Minister as the reason. After leaving office, Kisi remained a member of parliament until 1979, and all this time promoted revanchist themes.

Shinzo Abe's father, Shintaro Abe, also managed to be chairman of the LDP, and the high point of his ministerial career was the post of Foreign Minister, which he held in 1982-1986. He came close to the premiership, but in 1988 he was forced to leave the party due to a corruption scandal, and in 1991 he died suddenly.

Thus, for Shinzo Abe, “imperial ambitions” were not some kind of idle invention, and not even a state necessity, but literally a family value. Therefore, it is not surprising that he so consistently and stubbornly insisted on revising the results of the Second World War, both in a practical sense and in a moral one. (And no wonder, by the way, that the Chinese public is celebrating his sudden death with songs and dances – someday Armenians will mark Erdogan’s death in a similar way).

It's rather funny that a whole dynasty of politicians with such and such views headed the "liberal-democratic" party - although the NSDAP was also called "socialist" and "workers".

But Shinzo Abe was not alone in his beliefs. This fact does not particularly attract the attention of the public, but in Japan there is a whole association of revanchist elites: the “private club” Nippon Kaiji (All Japan Conference). This organization has about forty thousand members, the vast majority - businessmen, officials, ministers of the Shinto cult. One of them was Shinzo Abe, along with almost all the ministers of his penultimate cabinet and more than half of the members of parliament.

Founded in 1997 by a lingerie magnate, the NPO is pushing a “moderate nationalist” agenda in every possible way, from upholding traditional family values ​​and restoring the status of Shinto (that is, the desecularization of the state), to regaining control of Southeast Asia by Japan.

There are some similarities between the Nippon Kaiji agenda and the current platform of the American Republicans. Obviously, the association is not just a discussion club where moneybags all over Japan share wet dreams with each other. NPOs quite influence the socio-political course of the country, both “from below” (through manual preachers, youth organizations and even organized crime groups) and “from above”. And after all, we are not even talking about lobbying, but about the direct pushing by officials-members of the club of the decisions needed by "respected friends".

Bringing under the monastery

So, what about the Unification Church? Oh, there are many interesting things too.

The founder of this religious shop, Sun Myung Moon was a real pioneer of totalitarian sects in their modern form: she began to lay the foundation of the “church” named after herself in 1946, shortly after the liberation of Korea from Japanese occupation. Moreover, the “church named after itself” here is not just a figure of speech: creating the traditions of the genre, Moon declared himself the messiah, “the reborn Christ,” and his wife, “the reborn Mother of God.” In 1948, he even went to preach in northern Korea - but was jailed for two years for his speeches.

This trouble somewhat slowed down, but did not interrupt the growth of the family business: in 1954, the “Association of the Holy Spirit for the unification of world Christianity” (this is the official name of the “Unification Church”) finally took shape and began its victorious march around the world. The organization possessed all the signs of a totalitarian sect: syncretic (that is, a little bit from everywhere) doctrine, a leader’s personality cult, a clear hierarchy, economic exploitation of adherents and severe restrictions on leaving the community.

One of the “chips” of the “Church” is the mass weddings of new believers, the scope of which is really amazing: at the largest ceremony in 1992, two hundred thousand couples were simultaneously married at once. The process itself is, of course, highly ritualized, and one of its elements is the consumption of a drink containing (it is said) some blood of the "Messiah" and milk of the "Mother of God".

The exact number of adherents of the "Church" is unknown. The current "messiah" Moon Hyun Jin (youngest son of the late "Christ reborn" who returned to the underworld in 2012) claimed to have up to seven million followers worldwide, but this number is often said to be inflated. However, unlike many imitators, the "Church" behaved moderately enough to survive all attempts at prosecution, and now operates quite legally almost all over the world, including Russia. True, in our country, munism, as this doctrine is also called, has not found much popularity, and the number of sectarians is estimated at a couple of thousand throughout the country - and in Japan, for comparison, about fifty thousand.

In fact, this is not so important anymore, because the “Church” has long since reached a higher level than milking mere adepts dry. Having amassed start-up capital on exalted followers, Moon-father began to invest in industry and banking, becoming, in particular, one of the sponsors of the South Korean (especially) and Japanese "economic miracles".

It was on this that he really rose - so much so that he could afford to found international "humanitarian" organizations. The basis of this "ecosystem" is the "Peace Federation", designed to promote non-military resolution of interstate disputes; under its auspices, there are about a dozen different offices of a political, religious and humanitarian nature. Moon's projects have been so successful that the UN still closely cooperates with them, and national governments too.

It was in this capacity - a great businessman and "philanthropist" - that Moon Father was well received by great politicians, including Shinzo Abe. However, what can we say about Japan, if the Moon family owns an automobile plant ... in the DPRK. When his father was already ill, Moon-son attended the funeral of Kim Jong Il instead; and Kim Jong-un, in turn, officially expressed his condolences on the death of Moon-father.

What makes these facts particularly piquant is the fact that all of Moon's projects, starting with the Unification Church, have a pronounced anti-communist orientation. The eschatological section of his teaching predicts a general nuclear war (of course, through the fault of the godless commies), after which the Moonies of the whole world will have to build a global theocratic state with a "messiah" at the head. Anti-communism was one of the reasons why other properties of Moon's sect were overlooked by official authorities.

Already in the status of "ambassador of peace", the "messiah" actively promoted the theme of Korean reunification, of course, in the direction from south to north. This agenda, in turn, was supported by the late Shinzo Abe. In particular, at the end of 2021 (as well as Donald Trump and a number of other Western politicians) spoke via video link at a large congress of the Federation for Peace.

In general, the killer of the former prime minister was quite seriously mistaken: he greatly underestimated the scale of the problem. In fact, in the Asia-Pacific region, there is a local analogue of the Soros Foundation - not so rich, but perhaps more influential in its area, and striving for complete dominance over nation states. And the death of one politician, even such a big one as Shinzo Abe, will literally change nothing in the situation: he was just one of the figures in the local “big game”.
Reporterin Yandex News
Reporterin Yandex Zen
Information
Dear reader, to leave comments on the publication, you must sign in.