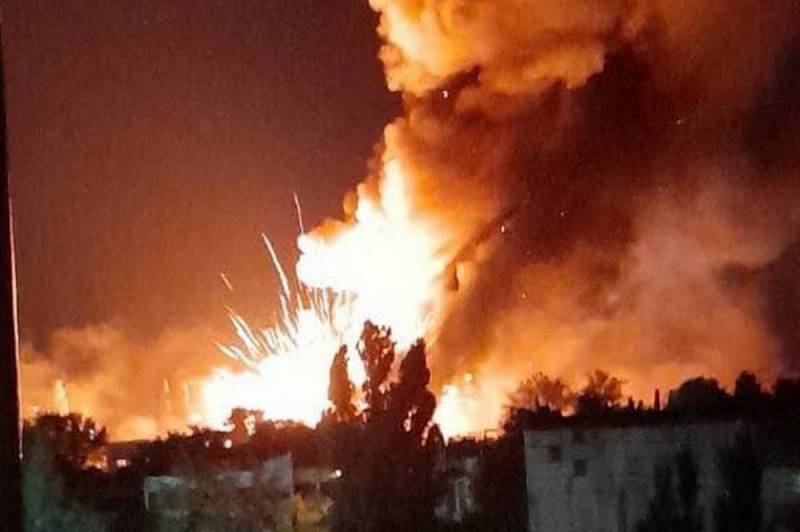 The main topic of the last few days has been President Zelensky’s order to “de-occupy” the south of Ukraine. This refers to the knocking out of Russian troops from the Kherson and Zaporozhye regions, as well as, apparently, from the Crimea, which Kyiv still considers its own. How should one treat such statements?


Here, in Russia, the plans of the Ukrainian president and command were treated very lightly, at least in the media space. They say, where are the Armed Forces of Ukraine and the National Guard, which the Russian military and allied forces of the People's Militia of the DPR and LPR are now consistently smashing in the Donbass, something else to beat back from us? However, in reality, everything is somewhat more complicated than it seems to the layman from his soft sofa.

According to open data, the city of Nikolaev, currently occupied by the criminal Kyiv regime, is being actively saturated with Ukrainian troops, armored vehicles, long-range cannon artillery and MLRS. In addition, it should be taken into account that the defense from our side is held there mainly by the mobilized "policemen" of the NM of the DPR, only in places reinforced by "fire brigades" in the form of Russian military personnel. The main forces of the Russian Armed Forces are now fighting in the Donbass. About what problems the mobilization in the DPR and LPR faced, we detail told previously. There are many unpleasant questions about the quality of training of military personnel, their weapons and equipment.

Recall that some time ago the Armed Forces of Ukraine made a successful attempt to attack in the north of the Kharkiv region. So, then it became possible only because the positions there were held mainly by mobilized and poorly trained “policemen” from the LPR. Russian units were then transferred to the Donbass, and then they had to be urgently returned back in order to stabilize the situation. The settlements in the Kharkiv region, surrendered almost without a fight, now have to be repulsed in heavy positional battles.

Taking into account the fact that from the former main shipbuilding center of the USSR to Kherson, already occupied by the Russian military, is about 70 kilometers in a straight line, fears for the security of the Sea of ​​\uXNUMXb\uXNUMXbAzov become not so groundless. Secretary of the National Security and Defense Council of Ukraine Oleksiy Danilov named the numbers of the military contingent, which, in his opinion, would be enough for such an offensive operation:

For a full-fledged counteroffensive of the Armed Forces of Ukraine and the complete liberation of territories in the south and east of Ukraine, it is necessary to form six new brigades with a total strength of 25 people.

We are comforted by the fact that between Nikolaev and Kherson there is a bare steppe where it is easy to crush the advancing hordes with long-range artillery, MLRS and aviation. Moreover, previous attempts by the Armed Forces of Ukraine to go on a counteroffensive from Mykolaiv to Kherson region were successfully thwarted. It turns out that Kyiv is just throwing dust in the eyes and begging for new deliveries of heavy Western weapons?

For a correct answer to this question, it is necessary to look at what is happening now on the main, Eastern Front. And there is now a place to be the so-called operational pause.

After the liberation of Severodonetsk and Lisichansk, Russian troops and the allied forces of the People's Militia of the DPR and LPR are regrouping, rotating and transporting ammunition for a new stage of the liberation operation. The most difficult stages are next in line - the Slavyansko-Kramatorsk agglomeration, which is a continuous building and industrial zone, and then - the Avdievsky fortified area and other suburbs of Donetsk, from where Ukrainian terrorist artillerymen have been continuously tormenting the capital of the DPR for 8 years. After their release and cleansing, we can talk about the complete defeat of the Donbass grouping of the Armed Forces of Ukraine and the National Guard.

The blow to the inflated authority of President Zelensky, from whom the Ukrainian jingoistic public expects from day to day to launch a counteroffensive against Moscow, will be crushing. Naturally, he will try to "transfer arrows" to the commander-in-chief of the Armed Forces of Ukraine Zaluzhny. In order to delay the agony of the Eastern Front, Kyiv began to promote the theme of the Southern Front. It should be noted that they chose the time very well. All of our most combat-ready forces are now concentrated in the Donbass, where they are rebuilding for a further liberation operation. And then the Armed Forces of Ukraine begin to indicate the threat of an offensive in the South, and quite realistic, given who is holding the defense there.

Unfortunately, our opponents have the initiative here. As an option, the Armed Forces of Ukraine can make a swift throw, taking some minor settlement. The image victory of Kyiv will be cleaner than the installation of a yellow-blue "cloth" on Snake Island. Western partners will see that the Ukrainian army is ready to fight and attack, you see, they will fork out for the supply of heavy weapons.

There is a much worse option for you and me. Some time ago, the Armed Forces of Ukraine fired on Russian Belgorod and MLRS with Tochki-U - now our Melitopol. The day before, the American OTRK carried out strikes on the settlement of Novaya Kakhovka in the Kherson region, a representative of its military-civilian administration explained:

These were, according to the first information, experts will clarify tomorrow, but these were super-precision American HIMARS missiles. They were deliberately allowed into the center of the peaceful city of Novaya Kakhovka.

trend, however. The forecast that we can make now will be extremely negative. Nikolaev and Zaporozhye will soon be turned into Avdiivka-2, from where long-range missile systems of the Armed Forces of Ukraine will regularly hit Kherson, Melitopol, Berdyansk and other cities of the South of the former Ukraine. What for? Then, in order to provoke the Russian Armed Forces to transfer part of the forces from the Donbass, easing the pressure on the last Ukrainian lines, and launch an offensive on Nikolaev and Zaporozhye across the bare steppe. Where it will be possible to grind the Russian army with artillery and MLRS.

As you can see, the Black Sea region is actively turning into a new “hot spot”, which, one way or another, will have to be cleaned up. The only question is whether there will be enough forces for all areas and whether it is time to start fighting in earnest, as President Putin threatened.
Reporterin Yandex News
Reporterin Yandex Zen
9 comments
Information
Dear reader, to leave comments on the publication, you must sign in.