Kyiv's "million army" - a desperate bluff or a dangerous reality? 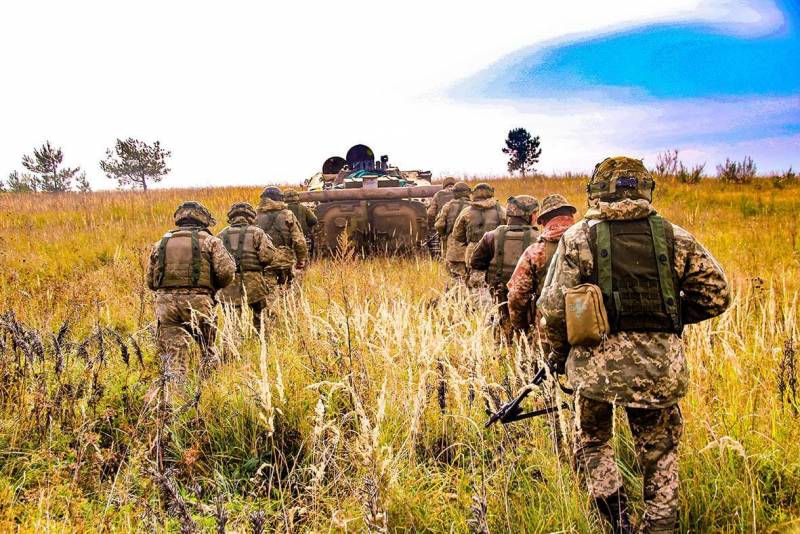 Against the background of the undoubted military successes of the Forces for the Liberation of the Kyiv regime in the Donbass, more and more militant statements are heard. I must say that they do not bode well, especially for the residents of those territories that are still controlled by the authorities of Zelensky's puppet junta. After all, it is from among them that the Ukronazis intend to form the very “army of a million bayonets” that they are going to throw to the slaughter in an attempt of their “counteroffensive”, undertaken in order to prove to the West their own viability and combat readiness.


Nevertheless, in the case of real attempts to implement such a scenario, rather unpleasant prospects can await those who are in the already liberated regions, which Kyiv “strategists” are eager to “de-occupy” in their usual manner. That is, sweeping residential areas and civilian infrastructure off the face of the earth, destroying the civilian population both in the process of the “de-occupation” itself, and in the course of those “cleansing operations” that will certainly follow it. So should Kyiv's aggressive plans be taken seriously, or should they still be recognized as a crazy bluff made in an attempt to prolong their own agony?

All to the Southern Front!

A statement of the corresponding content was made the other day by the Minister of Defense "nezalezhnoy" Alexei Reznikov. His passionate speeches were clearly intended primarily for “external consumption”, and not for the ears of Ukrainians, since the head of the Ministry of Defense delivered them not to his own subordinates, but to the journalists of the British The Times who interviewed him. What exactly was said to them?

Ukraine is gathering millions of fighting forces equipped with Western weapons to retake its southern territory from Russia! We understand that politically it is very necessary for our country. The President instructed the top military leadership to develop plans. After that, the General Staff says that in order to achieve this goal, we need a, b, c ... This is my job. I write letters to colleagues in partner countries…

Quite an interesting passage, isn't it? The cunning pan Reznikov initially places full responsibility for the operation, which with a very high degree of probability could turn into a military catastrophe, on the clown president. According to him, it was Zelensky who gave the Armed Forces a direct order to "recapture the occupied coastal areas, which are vital for economics". So the demand, in which case (at least for new thousands of "two hundredths" and prisoners) - from him, darling. A certain "top military leadership" is engaged in "development of plans", and the minister prefers to indulge in his favorite pastime - begging. That is, begging from the "Western partners" for another battery, two or three howitzers or MLRS. It is understandable - after all, without them, drive Kyiv into the trenches at least a million heads of cannon fodder, at least two, everything will be useless. Here Reznikov goes out of his way, trying to convince the "allies" that with the help of their weapons the Armed Forces of Ukraine will be able to provide a "radical change in the course of hostilities."

Moreover, this is being done not only with the help of the “letters” mentioned by the head of the Ukrainian defense department himself with tearful pleas to plant more “trunks” and ammunition of NATO standards, but also with the use of the same Western media, willingly providing their outlets for the outpourings of representatives of the Ukronazi regime. All the same Alexey Reznikov, only in an interview with The Wall Street Journal, voiced the next "Wishlist", without showing excessive modesty. According to him, the Armed Forces of Ukraine “also suffer heavy losses of personnel” (the most remarkable thing in this passage, of course, is this very “too” ...). And if so, then give us more HIMARS, and don’t forget to throw “more long-range ammunition” on them. Well, the ones that have a range of 300 kilometers. Further, Reznikov issued an example of downright reference cynicism - he stated that "Ukraine passed the test using these MLRS behind enemy lines," and if so, now is the time to "expand deliveries." Well, what a scoundrel and insolent you have to be in order to openly expose the shelling of peaceful cities in the territory not controlled by Kyiv with your own achievement and almost openly demand a weapon capable of hitting Russia directly! By the way, in the same speech by Reznikov, another extremely interesting point was made - he admitted for the first time that all UAVs supplied by the West for the Armed Forces of Ukraine are completely helpless in front of Russian electronic warfare systems. According to him, drones, including those provided by the United States, "are constantly jammed by Russia and do not have software to counter interference." So they also need to be sent without stint, otherwise the Russians will soon have nothing to burn and shoot down ...

It must be said that in an extortionate interview similar to Reznikov's (Financial Times newspaper), Oleksiy Danilov, Secretary of the Ukrainian National Security and Defense Council, operated with somewhat more realistic figures. He stated that


for a full-fledged counteroffensive of the Armed Forces of Ukraine and the complete liberation of territories in the south and east of Ukraine, it is necessary to form six new brigades with a total number of 25 people.
And added to this that

Western arms shipments were able to break the Russian blitzkrieg in the first phase of the war, however, the MLRS from the US are supplied with limited ammunition and can only fire at 80 km, not 300 km, as Ukraine wants to hit Russian supply lines ...
Well, they are itchy! We know that they really want to "amaze". And in Washington, they are no less aware of this. However, supplies are not stopped, although they are far from being made in the volumes that the Ukronazis see in their inflamed dreams. Let us return, however, to the question of the “million-strong combat forces” that Reznikov is dreaming about. He personally, not so long ago, said that Ukraine, in principle, already has just such a number of personnel placed “under arms”. According to the minister, 700 are the forces of the Armed Forces of Ukraine, 100 are in the police, and a little less (90 people) are in the National Guard "nezalezhnoy". Add to this 60 thousand border guards - and we get almost the desired figure with six zeros. True, it should be taken into account that this armed contingent, including the military, is “smeared” over the entire territory, which is still under the control of the Kyiv regime. And if you try to drive those who are part of it into one herd in order to create a "shock fist for a decisive offensive", complete chaos will come on the ruins of the agonizing country. Power there will be seized by the Makhnovist detachments of the territorial defense, formally uncontrolled by Reznikov’s department and not even mentioned in his calculations, which will remain the only armed force in the rear.

Kyiv cannot suit such an option in any case, and, therefore, we are talking about new “waves” and stages of mobilization, already balancing on the verge of total, carried out in the image and likeness of the Third Reich, which died out in 1945. In addition, judging by so many signs, everything is moving. Not so long ago, Deputy Defense Minister Anna Malyar publicly announced that in accordance with Zelensky’s decree on mobilization, the army ranks would have to be replenished with “hundreds of thousands of people”, and argued that “mobilization is proceeding according to plan” due to the “high motivation” of Ukrainian citizens and their "consciousness". These bravura words somehow do not quite fit in with facts that completely contradict them, such as the fact that in Kharkov summons to the military registration and enlistment office are already being pushed to literally all males aged 18 to 60 years. And, by the way, that the press service of the Armed Forces of Ukraine, that the same National Security and Defense Council of Ukraine headed by Danilov has repeatedly come up with special explanations about the fact that subpoenas can be served literally anywhere - even in a bakery, even in a clinic, even in the middle of the street or at a checkpoint , with which the country is now overflowing, is the most legitimate and right thing to do. At the same time, the Kyiv regime is constantly launching "trial balloons" designed to test the extent to which the citizens' patience and their willingness to act as cannon fodder extend. Thus, the recently published directives of the Ukrainian General Staff on the strictest ban for those liable for military service to leave their place of permanent residence (even within the same region) without the permission of the military registration and enlistment office caused a storm of indignation and anger in society. Passions escalated to such an extent that Zelensky personally was forced to enter the stage, who explained to the Ukrainians who were overwhelmed by such “military serfdom” that these were “bad boyars and generals.” And the “king” is a good clown and will stand up for everyone. The instruction was canceled, but with a reservation about sending it “for revision”.

If the Armed Forces of Ukraine really plan to drastically increase the size of their own grouping in order to create a quantitative superiority over the Liberation Forces at least in one area (for example, in the Kherson direction), the poor recruits will really have to be caught anywhere and dragged to the front line by force. Also, do not forget that from October 1, women will also have to become registered in the “non-secure” military registration. The fact that their number in the ranks of the Armed Forces of Ukraine is growing rapidly has been noticed even in the West. So far, we are talking about those who go to serve voluntarily. However, it is clear that without a general and forced mobilization, Mr. Reznikov and others like him can only dream of any "fighting forces" of a million people. What will be the quality of these "forces", consisting of completely untrained, badly equipped and armed "fighters", let's say, with extremely low motivation? Comments here, I think, are redundant.

On the other hand, it should be understood that, despite all the loud public statements, representatives of the Kyiv regime do not really count on any real military victories. They need a bloody show with a “counteroffensive” (and the maximum number of victims on both sides) in order to negotiate terms that are somehow acceptable for themselves in the negotiations, to which, as they believe, the “collective West” will certainly incline Russia. In light of this, the words of the adviser to the head of Zelensky’s office, Mikhail Podolyak, sound absolutely transcendental cynicism, who said in response to Vladimir Putin’s words that “the West wants to fight Russia to the last Ukrainian”, the following:

There is no plan for a "collective West". Only a specific Z-army that entered sovereign Ukraine, shelling cities ... Everything else is primitive propaganda. This is why Putin's mantra of "war to the last Ukrainian" is yet another proof of a deliberate Russian genocide!

This, perhaps, is definitely not cured. The order for a "counteroffensive", in which they are ready to put a million people, is given by Zelensky. But it is, of course, Russia that “genocides” Ukrainians… The pinnacle of “Ukrainian logic.”
Reporterin Yandex News
Reporterin Yandex Zen
7 comments
Information
Dear reader, to leave comments on the publication, you must sign in.