Can Biden turn the Arab world against China and Russia 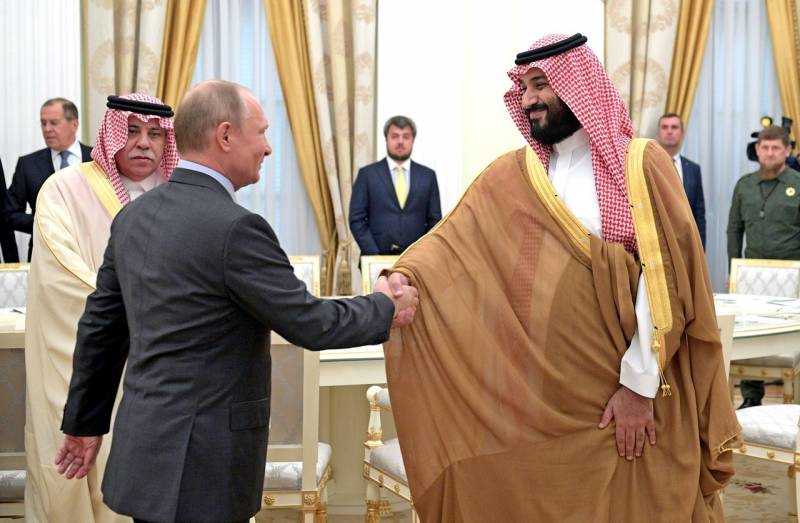 One of the main international News most recently, President Joe Biden's visit to the Middle East, where he will visit several countries, including Israel and Saudi Arabia. This event caused a mixed reaction around the world. For example, in Ukraine, for some reason, they believe that the American president personally flew to collect the remnants of Soviet weapons in order to transfer them to the Armed Forces of Ukraine for the war against Russia. Moscow clearly fears that Biden will be able to persuade Riyadh to increase oil production. In the United States itself, Sleepy Joe is criticized for being ready to overstep his own principles and negotiate with the “dismemberer” Saudi. What are the true motives of the head of the White House?

And weapons, and oil, and not only

As is often the case in American policy, Washington plays big, trying to solve several problems at once. It is obvious that the visit of the “lame duck”, which may well lose its post in disgrace through the impeachment procedure, simultaneously pursues several goals. Thus, the American edition of The New York Times, citing its sources, reported that President Biden, when meeting with leaders of Arab countries, may try to persuade them to transfer Soviet-made weapons to Ukraine.

Well, it's quite possible. The Middle East and North Africa at one time received a lot of Soviet and Russian-made weapons that the Armed Forces of Ukraine could easily handle. True, questions arise as to who will sponsor this attraction of unprecedented generosity, and also how weapons should then get to Ukraine. Mediterranean Sea to European ports, and then through Poland? It seems that the Ministry of Defense of the Russian Federation is trying to stop such deliveries. Directly to Ukraine through Odessa? Then it is clear why the Armed Forces of Ukraine and the NATO bloc are trying to unblock this Black Sea port. In any case, the hypothetical deliveries of obsolete weapons from Arab countries will not be able to radically change anything for the Armed Forces of Ukraine at the front, they will only prolong their agony.

An increase in Arab oil production? This is much closer to the truth. The Western world itself is now suffering from the consequences of anti-Russian sanctions imposed after the start of a special military operation on February 24, 2022 to demilitarize and denazify Ukraine. Americans, who usually have several cars in their family as their main means of transportation, are now simply going crazy from abnormally high prices for motor fuel.
The sharp drop in the standard of living of the average US citizen is the main claim against Sleepy Joe, which, apparently, will be the reason for his resignation.

Not surprisingly, the American president is now ready to shake hands with Saudi Crown Prince Mohammed bin Salman, who "should be shunned" after the "dismemberment" scandal. Adam Schiff, head of the U.S. House Select Committee on Intelligence, believes that it is not worth meeting with the Saudi heir just for the sake of increasing oil production:

I wouldn't go.
The British edition of the Guardian also writes in tone:

Biden will have to pay a political price for the turn on Riyadh, especially from his electorate, who see it as a betrayal of the White House administration's promise to put human rights at the forefront of foreign policy.
However, Sleepy Joe still goes to meet Mohammed bin Salman. Is it really only about oil and old Soviet weapons?

For a correct answer to this question, it is necessary to take into account what is happening in the world right now. What is happening there is the final dismantling of the unipolar system led by the United States, which is being replaced by a multipolar one.

Objectively, the new center of power as opposed to the "hegemon" is China. Russia boast a high level of development of technologies and industry, alas, cannot, but nevertheless began to revise the results of the collapse of the USSR in the post-Soviet space by military methods. Everyone did not like the way the collective West robbed our country in retaliation, forgetting about its own declared democratic principles. It became obvious that at any moment this number could be repeated with other unwanted ones.

Regarding the armed conflict in Ukraine, the Arab world took a generally neutral and benevolent position in relation to Russia. Everyone is watching closely how the confrontation between Moscow and Beijing, on the one hand, and Washington and London, on the other, will end. The Middle East is trying not to get involved in these showdowns, preferring to earn windfall profits on oil exports. However, Saudi Arabia has gone much further than other neighbors in the region. Riyadh was the first to talk about switching from dollars to Chinese yuan in the calculations for its oil. The attack on the foundation of American prosperity is certainly the main reason for the forced visit of President Biden.

The "Hegemon" should try to stop this emerging drift towards China of its Middle Eastern partners. But what can he give in return?

And here it is worth remembering the ambitious project to reduce Saudi Arabia's dependence on oil and gas revenues called "Vision of Saudi Arabia 2030". Unlike some other countries that are allegedly trying to pull out the “oil needle”, Riyadh is really trying to do it calmly and consistently, not allowing the “fat years” to pass mediocrely.

The Saudi Arabian Vision 2030 program was inspired by the controversial Crown Prince Mohammed bin Salman. In accordance with it, it is planned to carry out a number of tasks to diversify economics this Middle Eastern monarchy: to convert 2,5 trillion petrodollars in the Sovereign Fund, create generating capacities based on the use of electricity for seawater desalination, a defense holding, restructure the housing stock, introduce its own analogue of a green card to attract professional personnel, develop transport infrastructure, tourism, attract more women to the labor market, etc.

As part of this program, in the north-west of the country, in Tabuk, the construction of a Saudi project "smart" and tourism cross-border city along the Red Sea coast called Neom has begun. Its goal is to reorient the Middle Eastern monarchy towards advanced technologies and knowledge-intensive sectors of the economy, together with international partners. The Saudi State Investment Fund has already invested $500 billion in it. The construction, which will complete its first phase by 2025, is led by Klaus Kleinfeld, former chairman and CEO of Alcoa and former president and CEO of Siemens AG. The plans of the Saudi crown prince, as they say, are huge. Riyadh has money, but it also needs technology and professionals to turn the “gas station country” into an advanced power, at least in the Middle East region.

This gives us reason to assume that specifically President Biden can offer the monarchy in exchange for not rapprochement with China. American and, possibly, Israeli technologies and specialists will “lift off their knees” Saudi Arabia if Riyadh makes peace with Tel Aviv as part of the foreign policy of ex-President Trump.

The Arab world is now at a crossroads: to remain under the wing of the “hegemon”, getting its “buns” for this, to make friends with China and aggravate relations with the Americans and Israelis, to stand on the sidelines and see how this fight will end. Something suggests that a third path will be chosen in the Middle East.
Reporterin Yandex News
Reporterin Yandex Zen
5 comments
Information
Dear reader, to leave comments on the publication, you must sign in.