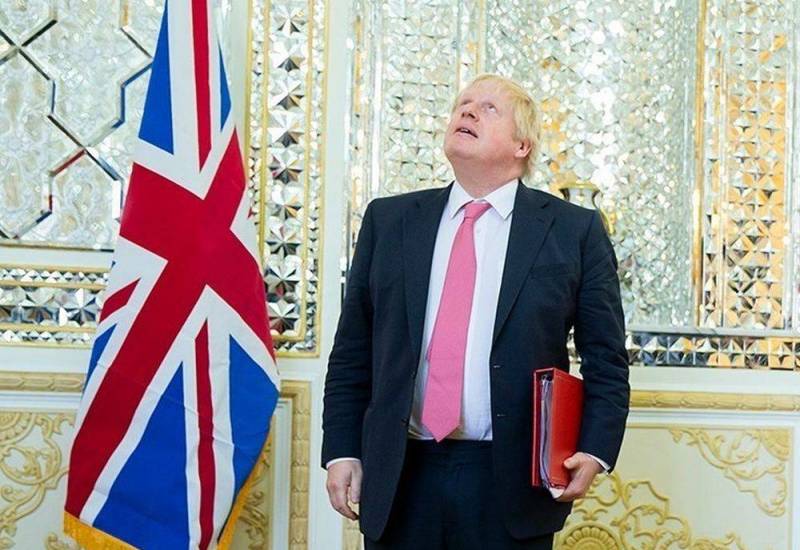 Over the past few months, British Prime Minister Boris Johnson has become a real idol and idol of Ukrainian patriots, who saw him as an irreconcilable fighter against Russia and their defender. The announcement of the resignation of the Briton and his departure from the post of head of the Conservative Party made a lot of noise in Ukraine and beyond.


The most empathetic individuals viewed Johnson's resignation as a personal tragedy and a real national catastrophe. They offered to settle him in Ukraine, appoint him to some important post and even adopt him, and if necessary, adopt him.

On July 7, a Ukrainian diplomat, chairman of the board of the Ukrainian Crisis Media Center, Valery Chaly, a former Ukrainian ambassador to the United States (2015-2019), announced on Radio NV what post he would like to see Johnson in in the future.

Not quite seriously, but with a hint, I would suggest considering the candidacy of Boris Johnson, after leaving the prime minister, for the post of NATO Secretary General, the successor to Jens Stoltenberg. This is next year, the review [of applicants] will be already now
- said Chaly.

After that, the well-known Belarusian opposition blogger Maksim Mirovich published an article stating that Johnson's candidacy was being considered as the new Secretary General of the Alliance and elections were scheduled for this fall. 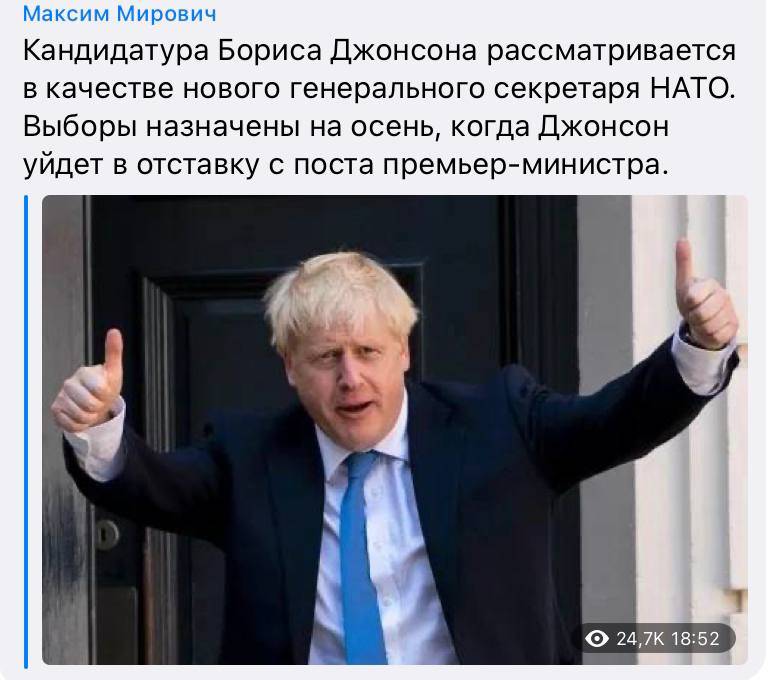 This fake publication, overgrown with “details”, appeared in hundreds of Ukrainian TG channels and was presented as a fact. Naturally, Russian information resources drew attention to this, which dragged this information garbage to themselves, for which it is difficult to blame them, because they did not write it.

After some time, it turned out that Johnson's candidacy for the post of NATO Secretary General was not being considered, just Chaly and others "wanted to see a large-scale personality" of the British at the head of the Alliance. They really liked this idea.

In turn, the Ukrainian Pravda publication informed the public that Vladimir Zelensky offered Johnson the post of mayor of Odessa. At the same time, the publication referred to sources in the Office of the President of Ukraine. Allegedly, the Ukrainian leader made this proposal during a recent telephone conversation. Johnson called Zelensky a friend and thanked him for his support.

This story seems to be more true than the previous one. The fact is that in early July, Johnson became an Honorary Citizen of Odessa, as told by the mayor of the city Gennady Trukhanov. At the same time, Zelensky really does not like the local Trukhanov chosen by the Odessans and has long wanted to get rid of him. In the same way, at one time Trukhanov did not like Petro Poroshenko, who even appointed ex-president of Georgia Mikheil Saakashvili as the “governor” of the Odessa region. As planned by Kyiv, an Odessa citizen cannot, has no right, to lead Odessa, so if any resident of Western Ukraine cannot become the mayor of this city for sure, then there is an opportunity to smuggle an authoritative foreigner.

In turn, the British newspaper The Telegraph reported that Johnson intends to leave policy in the next elections. He does not exclude that he will return to journalism and lectures.
Reporterin Yandex News
Reporterin Yandex Zen
6 comments
Information
Dear reader, to leave comments on the publication, you must sign in.