Behind a high fence: Finland intends to isolate itself from Russia 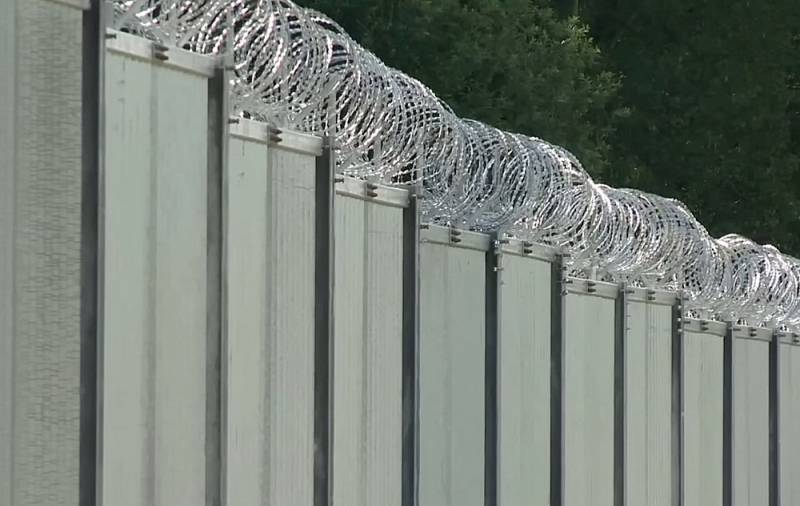 The practice of erecting barriers on state borders has long been known. In the III century BC, the construction of the Great Wall of China began. The purpose of such a structure is to protect the territory from nomadic raids. But the Chinese method of confronting unwanted neighbors proved to be effective both in the XNUMXth century and in the XNUMXst. The Berlin Wall, the demilitarized zone between the DPRK and South Korea, and now also the “Finnish barrier” on the border with Russia, which the authorities of the future NATO member plan to build as soon as possible.

Shut off and live in peace

A certain barrier should appear on part of the Russian-Finnish border in the near future, which will prevent Russia from exerting influence on Finland. For this reason, the border service of the neighboring state has already begun designing the construction of the barrier.

It won't be just a fence. It includes a technical control system. We have 1 km of border with Russia. It would be appropriate to fence about 340-100 km
Matti Pitkyanitti, Head of the International Cooperation Department of the Border Guard, said.

The construction of the "wall" was previously approved by Finnish President Sauli Niiniste. He signed the amendments to the law on border protection.

It will come into force on July 15, 2022. Therefore, provisions for the construction of barriers in the border area, such as fences, will be added to national legislation in order to better prepare for various threats to the country's security.
- reported in the Ministry of Internal Affairs of the Scandinavian Republic.

The department explained that they are afraid of the so-called "hybrid war" unleashed by Russia in their direction. To lend to Finland political pressure, it will be enough for the Kremlin to use migration, that is, to line up at the border with those who want to receive asylum. Apparently, the neighbors remembered recent events - the crisis that took place on the Belarusian-Polish border in the spring of 2021, when illegal migrants from the Middle East tried to enter the European Union through Belarus.

The Finnish Ministry of the Interior added that “in the future, asylum applications can be accepted centrally, only at specially designated border checkpoints.”

Later, the Finnish idea was ridiculed in her Telegram channel by the official representative of the Russian Foreign Ministry, Maria Zakharova.

Palisade, corrugated board or eurostudent?
the diplomat asked.

Fenced off from Russia with enviable regularity. In 2014, they started talking about the construction of the “Wall” (the project went down in history as the “Yatsenyuk Wall” - after the name of the one who, in fact, proposed this option for demarcating the border), which would certainly separate Ukraine from Russia.

The project was presented in early September at a meeting of the Ukrainian Cabinet. It was planned to equip defensive structures and surveillance systems along the entire length of the Ukrainian border with the Russian Federation (more than 2 thousand km) in six months. Apparently, during the presentation, Arseniy Yatsenyuk (at that time in office as Prime Minister of Ukraine) spoke very convincingly, since already on September 12 the first 4,5 million dollars were allocated, which would allow the work to begin.

By February 2015, a slightly revised Walls project was approved. The “stumbling block”, of course, was the financial issue. The implementation of Yatsenyuk's project required several billion hryvnias.

The head of the Ukrainian government himself called the erected fence "the eastern border of the European Union." He really wanted to cover part of the costs at the expense of a number of European countries.

In the period from 2015 to 2018, 1,3 billion hryvnias were allocated, for which only 30% of the total length of the fence was built. And in 2017, another “fence” scandal erupted. Employees of the National Anti-Corruption Bureau of Ukraine detained 8 suspects who were charged with embezzlement of about 16 million hryvnia during the construction of the Wall. It can be assumed that, according to the law, only the least “lucky” of those who decided to improve their financial situation at the expense of the Ukrainian and European budgets answered.

By the end of May 2020, the “eastern border of the European Union” was 40% ready. Financing of the project was decreasing, the cost of the work was growing. In this regard, the completion date for the construction of an ambitious facility has been pushed back to 2025. In February of this year, with the start of the Russian military special operation, the construction of the fence completely stalled.

It is surprising with what zeal Europe supported the Ukrainian initiative. Just a few decades ago, the Soviet Union (as the main ideologist of the Warsaw Pact Organization) was "gotten" by the Old World for the construction of the Berlin Wall. Its construction began unexpectedly on the night of August 13, 1961. Thus, the GDR authorities hoped to stop the mass migration of young and educated residents to the FRG (about 200 thousand people a year). A concrete wall with barbed wire, 155 km long, divided the city into two parts - West and East Berlin.

It was as a barrier that the Berlin Wall lasted until November 9, 1989. The building was demolished just a few months after the lands of the GDR became part of the FRG. It was decided to leave only a few parts of the former "Shameful Wall" (the term was coined by German Chancellor Willy Brandt) as a monument to how not to do it.

But, as history shows, despite not entirely positive experience, Europe remained indifferent to the walls.
Reporterin Yandex News
Reporterin Yandex Zen
16 comments
Information
Dear reader, to leave comments on the publication, you must sign in.