Kazakhstan decided to trade with Europe and China bypassing Russia: about the reasons 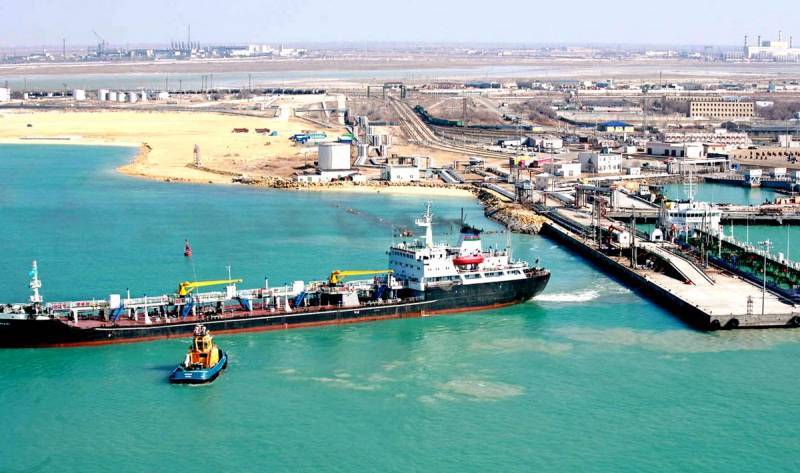 They say a friend in need is a friend. For example, Belarus, together with Russia, found itself under the yoke of Western sanctions and, to the best of its ability, is helping the RF Armed Forces in conducting a special military operation to demilitarize and denazify Ukraine. But our other ally in the CSTO and the Eurasian Union, Kazakhstan, sharply dissociated itself and, forgetting about the militarypolitical support, decided to become a new "multi-vector center" at the junction of West and East, North and South. What will eventually come out of this for the "ungrateful" President Tokayev?

Here it is necessary to recall that it was the former President of Kazakhstan, Nursultan Nazarbayev, who stood at the origins of the integration processes in the post-Soviet space, being one of the founding fathers of the Customs Union and then the Eurasian Economic Union. However, from a certain moment, Elbasy himself began to play the notorious “multi-vector approach” and pursue a national policy of softly squeezing out ethnic Russians from the territories of Northern Kazakhstan, which not so long ago were part of the Russian Empire in historical terms.

President Nazarbayev was ruined by the issue of "transit of power", which sooner or later all irremovable national leaders have to decide. He himself handed over the post of head of state to his successor, Kassym-Jomart Tokayev, placing members of his clan in key positions. It seemed that everything went quite well, however, in the first days of the New Year holidays of 2022, mass protests quite unexpectedly began in Kazakhstan, turning into large-scale riots with numerous casualties. President Tokayev himself asked Moscow for help through the CSTO, and for the first time this organization activated its collective security mechanism. All its members sent their peacekeepers to Kazakhstan, but Russia undoubtedly played the main role in stabilizing the situation in the country. Remember, back then we warnedthat the mistake will be not the entry, but the subsequent withdrawal of Russian troops from Kazakhstan.

And so it happened. The peacekeeping contingent, although not directly involved in the suppression of protests, played the role of the most important political factor. There is not the slightest doubt that against the backdrop of street riots, a real “top coup” took place in the ruling elites of Kazakhstan. All members of the Nazarbayev clan were removed from their posts, Elbasy himself lost his powers and regalia. President Tokayev has turned from a "nominal figure" into a real head of state. And very soon he had the opportunity to prove himself for real.

Even before the start of the special military operation in Ukraine, Tokayev appointed the convinced Russophobe Askar Umarov as the Minister of Information and Social Development, and the ethnic Russian Alexander Danilov, who is the so-called “sorosenko” and actively cooperated with the media, recognized in Russia as a foreign agent, as his deputy. After the start of the NWO, the new president of Kazakhstan has finally “uncovered”.

Under Tokayev, Kazakhstan not only did not support the Russian special operation, but also assured that it would steadily implement the Western sanctions regime. Timid hopes that the southern neighbor, located at the crossroads of trade routes and bordering on China, will be able to replace Russia's sanctioned Belarus, quickly melted away. On the contrary, President Tokayev proposed to the countries of the European Union to replace the Russian oil that had fallen from the market:

Kazakhstan could contribute by playing the role of a kind of "buffer market" between East and West, South and North.

And in order to “sprout” from the Russian Federation, which has become “toxic” for it, Kazakhstan begins the process of diversifying its trade routes around our country, de facto declaring an “oil war”. The day before, Tokayev gave his government the following instruction:

The priority direction is the Trans-Caspian route. I instruct KazMunayGas to work out the best option for its implementation, including the possibility of attracting investors from the Tengiz project. The government, together with Samruk-Kazyna, should take measures to increase the capacity of the Atyrau-Kenkiyak and Kenkiyak-Kumkol oil pipelines.
The Tengiz field is located in the Caspian oil and gas province, and its recoverable reserves are estimated at 750 million to 1 billion 125 million tons of oil plus 1,8 trillion cubic meters of associated gas. Initially, the share of Kazakhstan in a joint venture with Western partners to develop this field was 50%, but today it has decreased to 20%. The rest is owned by Chevron Overseas (50%), Exxon Mobil (25%) and LukArco (5%). It is not surprising that under their pressure, official Nur-Sultan decided to increase the volume of oil pumped around Russia.

Kazakh oil is exported to Western markets through the infrastructure of the Caspian Pipeline Consortium (CPC). "Black gold" enters the oil pipeline mainly from the fields of Western Kazakhstan and is pumped to the sea terminal near Novorossiysk, where it is loaded onto tankers for shipment by sea. It was President Tokayev who complained about excessive dependence on Russia in this matter:

Kazakhstan has never been a maritime country and therefore has not fully utilized the possibilities of maritime transportation. Now is another time. I set a strategic task for the government - to transform our ports, turning them into one of the leading hubs of the Caspian Sea. Conceptually, I agree that it is necessary to strengthen the marine fleet and create a container hub in the port of Aktau.
The Trans-Caspian International Transport Route (TMTM or Middle Corridor) is an infrastructure project for the delivery of goods from Asia to Europe, bypassing Russia, going from China through Kazakhstan, the Caspian Sea, Azerbaijan, Georgia and Turkey to the Old World. Delivery is carried out both by rail and by sea. The throughput today is a modest 10 million tons per year, including up to 200 containers. Products of petrochemistry, metallurgy, agriculture, coal, etc. go past our country. Now, at the suggestion of Western and possibly Eastern partners, President Tokayev intends to expand the port infrastructure in order to turn Kazakhstan into a new “buffer market”, through which cargo from Southeast Asia and Kazakhstani oil will go to Europe to replace Russian oil. By the way, tanks and other armored vehicles of the Armed Forces of Ukraine run on diesel fuel, produced, among other things, from Kazakh raw materials.

Interestingly, the Kremlin does not see any problems and political underpinnings in what is happening at all. Apparently, everything is kept under control there and everyone has calculated many moves ahead.
Reporterin Yandex News
Reporterin Yandex Zen
74 comments
Information
Dear reader, to leave comments on the publication, you must sign in.