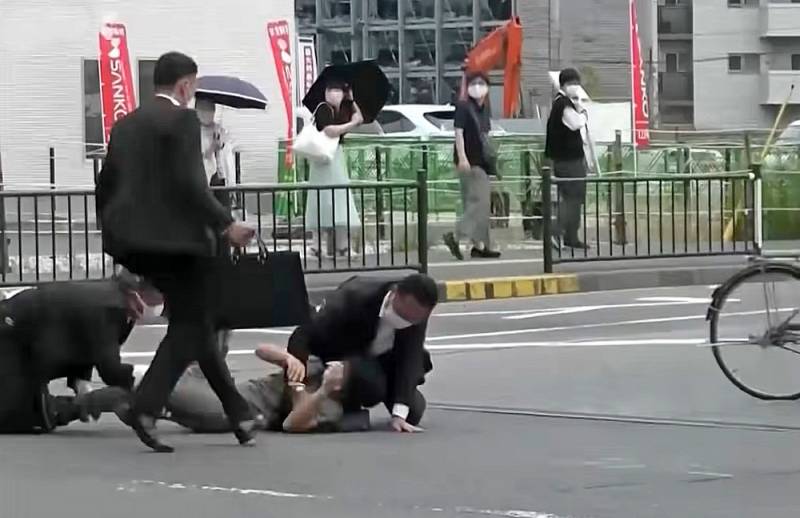 World news starting to look like something political thriller. Yesterday, the main event of the day was the unexpected resignation of British Prime Minister Boris Johnson due to an obvious "palace coup". This morning, former Japanese Prime Minister Shinzo Abe was assassinated in an assassination attempt. Will the shootings in Honshu in a metaphysical sense become echoes of the events of June 28, 1914 in Sarajevo?


According to media reports, the former Prime Minister of the Land of the Rising Sun Shinzo Abe spoke publicly this morning, July 8, 2022, in the city of Nara, located in the southwest of the island of Honshu. At 11:30 local time (5:30 Moscow time) shots were fired, and the politician fell down, struck by them. The former head of the Japanese government was taken to Nara Prefectural University Hospital, where he received emergency medical care. Unfortunately, the injuries received were incompatible with life, clinical death was diagnosed, and he died. Shinzo Abe was 67 years old.

His killer turned out to be a 41-year-old local resident named Tetsuya Yamagami. He shot the former prime minister with two shots from a homemade rifle shaped like a sawed-off shotgun. During the arrest, the killer did not resist the police, did not try to escape from the scene of the crime. The most interesting were his motives. According to current information, Yamagami is a former member of the Japan Maritime Self-Defense Force, and he was not satisfied with the policies pursued by Shinzo Abe, who was killed by him.

What specifically did not suit the retired Japanese serviceman?

Right now, many politicians, public figures and political scientists are in a hurry to express their condolences to the family of the deceased Abe, calling him almost the former best friend of Russia, who was determined to sign a peace treaty with our country. However, this somehow does not take into account that the main goal of the Japanese Prime Minister was the return of the so-called northern territories, by which Tokyo understands our Kuril Islands, and a peace treaty would only be an appendix to this "deal".

Recall that the Kuril Islands became part of the USSR, and then the Russian Federation as its successor as a result of the Second World War, where militaristic Japan was one of the main aggressors along with the German Nazi Third Reich. As a result, losing Germany lost East Prussia, a third of which went to us in the form of the Kaliningrad region, and Japan - the Kuril Islands, which made it possible to close the Sea of ​​​​Okhotsk, turning it into our inland. However, Tokyo does not recognize the Kuriles as Russian and demands the return of their former "northern territories", and Washington actively supports it in this.

The problem is that it is impossible to return them in principle for a number of reasons, but it is quite enough and purely military. It is there, in the deep-water Sea of ​​Okhotsk, that strategic SSBNs with ICBMs on board are now on combat duty, which are the most important component of our "nuclear triad". If the Kuriles go to Japan, both Japanese warships and American warships as allies will be able to freely walk there. Despite all of the above, Shinzo Abe was as close as possible to getting what he wanted.

A few years ago, unexpectedly for everyone, President Vladimir Putin himself suddenly started talking about the need to sign a peace treaty with Japan in conjunction with the agreements of the Khrushchev era, when two of the four islands could really go to Tokyo under certain conditions (in fact, there are many more, since Habomai is not a single island, but a group of small islands). Some foul-smelling negotiations began, and Prime Minister Shinzo Abe was so inspired that he even graciously allowed the Russians to live on the islands returned to Japan. Of course, we don’t know what they actually agreed on on the sidelines, but the attitude of the absolute majority of Russians towards the prospect of such a “deal” for the sake of a peace treaty was so negative that, as a result, negotiations on this topic were curtailed.

Moreover, in the course of amendments to the Constitution of the Russian Federation in 2020, provisions were introduced prohibiting the exclusion of any territories of our country. For Moscow, which teased the Japanese with its almost-reclaimed "Northern Territories," that page has been turned. But for Tokyo, apparently not.

Recall that back in 2019, when the desired seemed so close, Prime Minister Abe swore on his father’s grave that he would return the Kuriles to his “native harbour”:

I will do my best every day, I swear before the grave to fulfill my duties.
But, as we see, he could not fulfill his promise. And already in 2020, unexpectedly for everyone, he resigned "for health reasons."

To understand the subsequent events and why the life of the retired prime minister came to such an end, it should be taken into account that the return of the "northern territories" has long turned into a new national idea in Japan. All Japanese politicians in one way or another speculate on this topic, winding up their society. War criminals of the Second World War are now being glorified there, militarization is taking place not only economicsbut also public consciousness. Who was the retired prime minister for the broad masses of the people, who almost returned, but never returned the Kuriles? Not hard to guess.

You should also pay attention to the identity of the killer Shinzo Abe. This is a retired employee of the Japan Maritime Self-Defense Force, which, in theory, should, in which case, by force decide the issue of the return of the "northern territories" if peace does not work out. As you can see, all peaceful options have already been completely exhausted, there is nothing to agree on. Tetsuya Yamagami took a gun, publicly shot his former prime minister out of "dislike for his policies" and did not go into hiding. Say what you like, but this is a political manifesto.

If in the end it turns out that Japanese society treated the killer with understanding, this would be a very bad signal for Russia. Worth a lot ponder.
Reporterin Yandex News
Reporterin Yandex Zen
11 comments
Information
Dear reader, to leave comments on the publication, you must sign in.