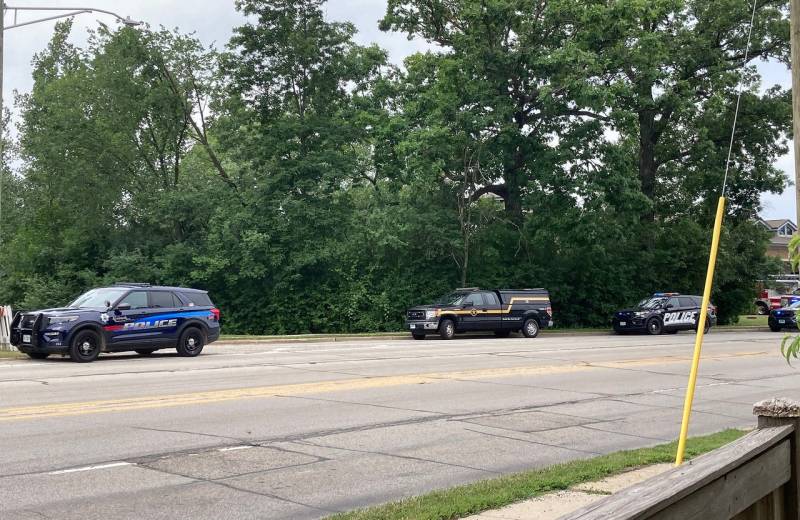 The first week of July was somehow not very successful for the most “democratic” states of the world. The main trouble was, of course, the resignation of British Prime Minister Johnson - but that was a grand finale, which was preceded by "problems" of a smaller scale, but also quite interesting.

On July 4, another loner with a rifle shot down a festive demonstration in honor of the Independence Day of the United States in Highland Park, Illinois. The incident was not the only one of the day (there were eleven mass executions in different parts of the country), but the largest in terms of the number of victims: seven dead and twenty-five injured, out of ten and eighty-one, respectively, per day.

In addition to "performance", the twenty-two-year-old murderer from Highland Park is also notable for the fact that he carried out his revenge on the whole world ... in women's clothing. He was taken alive, so we have a chance to find out if this, in his sick understanding, had some symbolic meaning, or it was simply more convenient for him to run with a rifle in a long skirt.

Another interesting news came from Foggy Albion. On July 1, a certain transgender activist of Irish origin, a “feminist” and “anti-fascist”, who was previously the coordinator of various peaceful demonstrations for the rights of “oppressed minorities”, decided to enter the path of real struggle: he posted on Twitter a proposal to his audience ... to make bombs and send their writer JK Rowling. He attached to the message her home address and a photo of himself with some manual on making explosive devices and the so-called "pipe bomb".

The proposed victim is not accidental: Rowling, once a cult author of good teen literature, is now persona non grata in the foreign bohemian crowd, “cancelled” for rather harsh (for a Western media person) remarks about the LGBT community. Previously, the writer has already been harassed in social networks.

It is not yet known whether the Irish “anti-fascist” actually made the bomb, or whether his photo was a simple piece of pipe with a semblance of a wick - but he certainly set a precedent so beloved in the Anglo-Saxon world, like his “colleague” from the American Highland Park.

The idea of ​​an armed riot of "fighting homosexuals" seems like a bad start to a bad comedy - but it's too early to laugh. The fact is that the “epoch-making event” around which the mythology and cult of the Western LGBT panopticon is built was just an armed revolt.

Nowadays, the cultivation of various sexual perversions among the masses in the US is encouraged from the very top - but this was not always the case. The middle of the last century was the same difficult time for American homosexuals as for their counterparts around the world: same-sex love was not only condemned by society, but was also criminalized. Its apologists had to have fun in underground clubs (yes, like the Blue Oyster from the movies, but much less presentable), which from time to time became the targets of police raids - not so much because of the concentration of perverts, but because of the connection these institutions with organized crime.

Late on the evening of June 28, 1969, such a raid took place at the New York club Stonewall. At first, everything went as usual: undercover agents got inside, scouted the situation, called for reinforcements; the rushing police officers interrupted the party and began making arrests. At some point, when one of the detainees was tightened more than usual, a crowd of local regulars became furious and attacked the police inside and on the street next to the tavern, several hundred people against three dozen policemen. The latter had to call for help "astronauts" from the "tactical police squad" with shields and batons, who, with the help of them and fire hoses (homosexuals destroyed and set fire to the same institution in which they had fun a couple of hours ago) dispersed the crowd. Mass fights near the Stonewall club continued for several more nights, until July 3.

Such an "epic" rebellion. Although from objective evidence only protocols remained from him, and a few not the most expressive photographs (after all, it was at night), the news about him was widely spread with rumors and was replicated in the media. As early as next year, homosexuals and sympathizers across the US started a tradition of holding "Stonewall Parades" to mark the occasion. Gradually, this trend spread throughout the West.

The criminal prosecution of homosexuals in the United States was finally abolished only in 2003. But even before that, at the end of the Clinton presidency, in the summer of 1999, a memorial of national importance dedicated to the events of 1969 was opened next to the Stonewall club; also, Clinton twice, in 1999 and 2000, declared July LGBT Month. Under Bush, there was no such nonsense, but Barack Obama restored this tradition, not forgetting to congratulate the rainbow brethren every year of his term. Even Trump once made an announcement about “LGBT July”, however, he limited himself to Twitter, for which he received a portion of reproaches from the “progressive” public.

Now, you can laugh a little.

Hey, get up, cursed brand!

At one time, in the 1990s, the rise in popularity of all this homosexual-transgender topics was part of a big game of “natural” discrediting and disavowal of the left movement in the West, along with the imaginary “overcoming” of racial contradictions and “peace” between corporations and trade unions. Now, aggressive LGBT propaganda is more like the same out of control prank.

"Bad plot of a bad comedy" ... Yes, but the senile president of a nuclear power, officially, under the cameras, greeting a whole zoo of assorted perverts in his administration from the podium - it seems that he is also some kind of grotesque satirical character, but this is a real-life Joe Biden.

Against the background of his figure, and in general policy Democratic Party to further root rainbow seedlings in American soil, two trends are growing in society. On the one hand, in the older age groups there is a growing rejection of the perverted official "newsletter". The problem is already seen as so serious that in "rebellious" Florida a legislative ban on LGBT propaganda in schools among minors has been introduced, and in even more "rebellious" Texas, the Republicans place its official condemnation in one document with the question of the need to secede from the United States.

On the other hand, the proportion of underage youth identifying themselves with some fashionable (L, G, B or T) word continues to grow, and has already reached ten percent - twice as many as five years ago . And these millions of teenagers with a distorted psyche are almost ideal material for the rise of a new movement of armed "fighters against oppression" in the spirit of the BLM and under the auspices of the Democrats.

Of course, this is not about creating some kind of real “military organization” (although, what the hell is not joking?) - it is not needed when there are proven methods of social engineering and controlled media of all kinds. In the United States, the phenomenon of imitation is already widespread, when, after some particularly noticeable massacre, a wave of similar cases takes place throughout the country - and if you throw a lure into a swamp to unintelligent tadpoles who are already accustomed to repeat after "challenges" from social networks, even extremely stupid ? In the end, after twenty years and many similar episodes, the two teenagers who shot down the Columbine school remain the idols of part of the American youth and continue to find followers.

The precedent itself, as I said at the very beginning, has already been created; it remains to be seen whose media will promote it, and in what vein.

After all, manifestations of “terminal cruelty” to “queers” on the part of right-wing radicals are no less (and even more) likely. Actually, they have already happened more than once, but now the risk of precisely “spectacular” mass murders on the air is increasing. A month and a half ago there was a racially motivated shooting of blacks in Buffalo - who said that a similar gender-motivated scenario is impossible? The mechanisms for launching such “lone hunters” are not at all different, only they are turned not by Democrats, but by Republicans.

The deepening of segregation and the growing tension between groups in American society is beneficial to both major parties. The growing chaos opens up the prospect for both Republicans and Democrats to "tip the table" with their opponents and establish the one-party police dictatorship that already seems necessary to maintain US global hegemony. There is no doubt that all available tools will be used in this fight, no matter what color they are.
Reporterin Yandex News
Reporterin Yandex Zen
6 comments
Information
Dear reader, to leave comments on the publication, you must sign in.