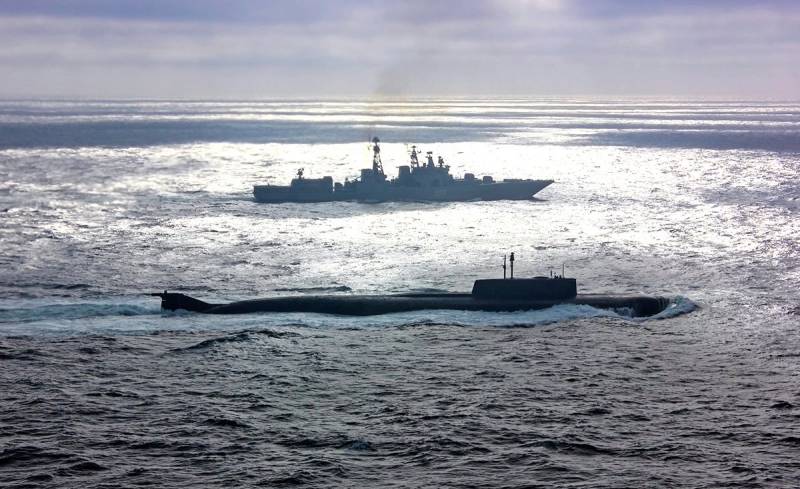 As we expected, the Barents Sea is turning into a new point of tension between the Russian Federation and the NATO bloc. It would be more correct to say that our country is heading for a territorial conflict with Norway, which is a member of the North Atlantic Alliance, which, in fact, inspired Oslo itself with a transport blockade of Svalbard. How should the command of the Russian Navy react to this?


The day before, Speaker of the State Duma of the Russian Federation Vyacheslav Volodin instructed the relevant committee on international affairs of the lower house of our parliament to consider the possibility of suspending the agreement between Russia and Norway on the delimitation of maritime spaces and cooperation in the Barents Sea:

Let's ask Leonid Eduardovich to look into this issue and then inform the deputies.
The expediency of this step was stated by the deputy of the State Duma of the Russian Federation from the Communist Party Mikhail Matveev:

We ceded 175 thousand square kilometers of the Barents Sea to Norway.
Note that this approach is completely within the framework of our own proposal, expressed in article dated June 30, 2022 under the title "Blockade of Svalbard could cost Norway the waters of the Barents Sea". Real policy they preferred real solutions instead of ridiculous ideas like subjecting Oslo to a nuclear bombing, coming from some overly exaggerated would-be "experts". Well, there is nothing to be surprised here, because correct forecasting can only be based on real adequate analytics.

But let's get back to our pressing matters, which are developing around Norway's transport blockade of Svalbard for Russia and the possible denunciation of the "obscene" agreement on the unfair division of the Barents Sea, signed by Moscow and Oslo during the "liberal Sabbath" under President Dmitry Medvedev. Naturally, the Kingdom of Norway will not calmly watch how it is taken back from what it already considers its rightful. What does Russia need to physically return and keep under its control a sea area equal in area to two Moscow regions?

In the Barents Sea, the descendants of the Vikings are primarily interested in the recently discovered richest oil and gas reserves there, as well as fishing. Since they will not refuse to extract these valuable resources so easily, they will have to be somehow forced to do so. Let's immediately take into account the next insane proposals to launch a nuclear strike on Oslo if any Norwegian seiner enters the gray zone. After that, it will turn out that Russia needs a sufficiently numerous and combat-ready navy in order to actually, and not just legally, control the water area that it claims.

The Red Banner Order of Ushakov Northern Fleet is responsible for the Barents Sea and the Arctic as a whole. He is rightfully considered the strongest in the Russian Navy. However, if you look at it, it turns out that its main striking power is concentrated in the underwater component. That's enough for a strategic nuclear deterrent or hunting down US military convoys to Europe, but how about chasing Norwegian trawlers on a regular basis and fending off Russians from Norwegian patrol ships? These tasks are not to be performed by nuclear submarines, which means that an appropriate surface fleet is needed. And here the most interesting begins.

The flagship of the Northern Fleet of the Russian Federation TAVKR "Admiral Kuznetsov" is under long-term repairs. The heavy nuclear-powered missile cruiser Admiral Nakhimov is also under repair, its counterpart under the Peter the Great project is in need of deep modernization and rotation. In service there are the Marshal Ustinov missile cruiser (a brother of the Moscow that died on the Black Sea), the old project 956 destroyer Admiral Ushakov, 3 large anti-submarine ships (BPK) of project 1155 (Admiral Chabanenko is being modernized under the project 1155.1M) and 2 modern frigates of project 22350 "Admiral Gorshkov" and "Admiral Kasatonov". This is what is worthy of mention from large surface ships. Also in the Northern Fleet there are small missile and anti-submarine ships, large landing ships and landing boats, minesweepers and one artillery boat.

Obviously, their main task is to ensure the security of the maritime component of our "nuclear triad". Chasing after Norwegian seiners and other vessels, having a showdown with the patrol ships of the kingdom is not their profile at all and a harmful distraction from their main purpose. It turns out that after part of the Barents Sea becomes controversial, the composition of the Northern Fleet of the Russian Federation will have to be somehow revised. In this regard, without claiming to be the ultimate truth, I would like to make a couple of suggestions.

At first, it is necessary to withdraw from the Baltic Sea all the corvettes and patrol ships available there, dividing them between the Northern and Pacific fleets. After Finland and Sweden join the NATO bloc, for the North Atlantic Alliance, the Baltic will objectively turn into an "inland sea", through which a potential enemy can shoot through aircraft and anti-ship missiles. For ships of the 2nd rank, there are simply no real tasks there, which we will discuss in detail told previously. It is possible to leave small missile ships as carriers of Caliber and escort for merchant ships, as well as minesweepers as part of the DKBF.

It would be advisable to transfer the Yaroslav the Wise patrol ship, as well as a couple of Project 20380 corvettes, to the Northern Fleet, and the other two Baltic corvettes and the Neustrashimy, after it is out of repair, to the Pacific Ocean, where they will really be useful. In the Barents Sea, these patrol boats would be able to drive the "Vikings" from the disputed waters.

Secondly, there, to the Barents Sea from the Black Sea, it is probably worth transferring all patrol ships of project 22160. The experience of confrontation with the Armed Forces of Ukraine for Snake Island showed that these "doves of peace", created to fight certain "pirates", are absolutely useless in a real war . We are not going to fight with Norway yet, but control over the disputed water area of ​​the Barents Sea, the detention of Norwegian fishermen and so on in the same vein - this is what they can really be able to do.