India-Pakistan-China: the situation in the "triangle" continues to heat up 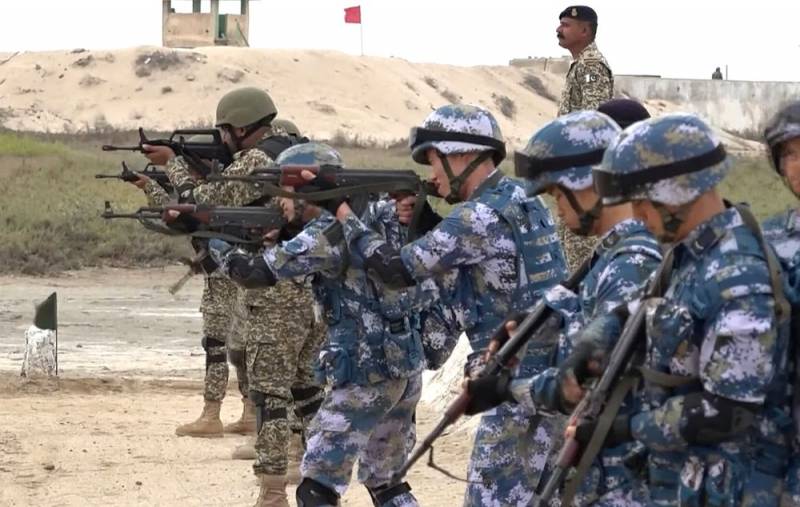 Although Ukraine remains the hottest spot on the planet, this does not mean that in other conflict zones everyone is frozen in anticipation of how soon and at what geographical boundary “independence” will end.


No, the Middle East is smoldering as usual. And if the unrest in Iran by and large came to naught, then in India и Pakistan the situation is only getting worse, especially in Pakistan.

Last week another hot spark flew over India's sectarian "gasoline lake". On June 28, in one of the cities of the state of Rajasthan, which borders on Pakistan, two Muslims, motivated by religious hatred, killed a Hindu. The latter was smart enough to somehow (not specified in the reports from the field, personally or using social networks) to reproduce insults against the Prophet Muhammad, which were posted on Twitter in June by the press secretary of the Indian ruling party Bharatiya Janata Party.

Unlike the official, who escaped with dismissal, a simple tailor paid for his words with his life. This is not exactly a rare situation in those parts, but in this case, the killers, apparently directly connected with some Islamic radical group in the region, literally took the head off the victim's shoulders.

Although they were only detained for a few hours, this did not calm the local Hindu population. Several crowded and very aggressive demonstrations took place, in which people demanded a speedy death penalty for both criminals and showered unflattering words on Prime Minister Modi, who allegedly "disbanded these Muslims."

It is quite amusing to hear such accusations against Modi: none other than he and his party are the main conductors of aggressive Hindu nationalism, which, in terms of the level of “over-Usevism”, is not much different from Ukrainian nationalism. Much less amusing is that Modi has a lot of experience in bloody play on the enmity of Hindus and Muslims, and precedents such as the murder in Rajasthan may well be part of a provocative campaign against the Islamic community of India and, most importantly, Pakistan.

Indeed, the situation with a couple of radicals seems to be a stalemate: procrastination with the court can anger the crowd so much that it itself will begin to smash local Muslims, while a hasty trial and execution (by the way, not provided for by Indian law) will launch actions of retribution from the Islamists , and, perhaps, that not only in one state. There is a non-zero probability that the Indian elite is just waiting for this with the calculation to go through fire on the bases of radical groups in Pakistani territory.

In Pakistan itself, things are not going very well without this, and are already on the verge of transition from smoldering to open burning. Shahbaz Sharif's team cannot cope with any of the many "well-wishers": neither with the separatists of the southwestern province of Balochistan, nor with the supporters of the former Prime Minister Khan (a kind of local Donald Trump), who are on strike throughout the country, nor with the Pakistani wing of the Taliban (banned in the Russian Federation), a truce with which has barely begun is on the verge of collapse due to the fact that the government has not fulfilled its part of the deal. In addition, the country continues to be tormented by natural disasters: the other day, several areas went under water due to heavy rains. Finally, the International Monetary Fund denied Pakistan a much-needed $6 billion loan.

China is ready to help Pakistan with money - naturally, not at a loss. However, what the PRC claims can lead to direct conflict with India.

Curiously, one of the demands that the IMF put forward to the Sharif government was to renegotiate the terms of the China-Pakistan Economic Corridor agreement, which, in turn, is an important element in the One Belt, One Road project.

In essence, CPEC is a program to radically modernize the Pakistani transport network, especially from the Chinese border to the coast of Balochistan, and then use it for the transit of goods. In the context of confrontation with the US in Southeast Asia, the Pakistani corridor is extremely important for China, as it will create an alternative to the vulnerable maritime trade route around India. It is also important for Pakistan, as it will seriously improve the country's transport connectivity and provide tens of thousands of jobs.

No money was spared for KPEC, according to some estimates, the total cost of the project will be $60 billion. So it is not surprising that China refused Pakistan to renegotiate the conditions, and then Pakistan also denied the IMF its claims.

Since the situation in the important “dominion” is now quite threatening, China is ready to provide, according to unconfirmed reports, another 60 billion dollars of a loan to the Pakistani government. And since Pakistan is clearly unable to return such an amount within an acceptable timeframe, China, according to the same insiders, is ready to take "in kind" - more precisely, part of the territory of the border province of Gilgit-Baltistan. This is, of course, not about annexation, but about a long-term lease of the most interesting areas.

This is where the big international problem begins. The fact is that this region itself is disputed between Pakistan and India, like neighboring Jammu and Kashmir. In addition, Aksai Chin is right there, the sovereignty over which India disputes already with China itself.

As if that weren't enough, Gilgit-Baltistan borders not just China, but China's relatively stable Xinjiang Uyghur Autonomous Region, where local Muslim separatists are active from time to time. Afghan Badakhshan hangs over it from the northwest, where fighting is now taking place between the Taliban and the anti-Taliban coalition of Ahmad Massoud.

This “knot” also captures part of the CIS: although Pakistan does not directly border Tajikistan, behind a rather narrow strip of Afghan territory is the Gorno-Badakhshan Autonomous Region, which has recently seen a radicalization of the population and an increase in separatist sentiments. The latter are called as ill-conceived policies the Tajik authorities, which are increasing police pressure on this large and impoverished region with a non-Tajik population (it is inhabited by a special ethnic group - the Pamirs), and the activities of Western NGOs and Afghan groups.

In short, Chinese interest is in an extremely explosive patch. If the deal on the lease of the territory is really signed, then troops will have to be sent in to protect the concession - whether the army, or PMCs, but it will have to. It is even possible that it will be necessary to place garrisons along the entire KPEC, all the way to the coast.

It is difficult to predict what intensity of passions this event can cause. The Pakistani army has so far shown loyalty to the Sharif government and is unlikely to confront the Chinese. It is quite another matter - the numerous and diverse opponents of the current government, who will almost certainly go on the offensive with shouts of "The country is being sold to the Chinese!"

But the reaction of India will, of course, be decisive for the situation. Not so long ago, just two years ago, the world witnessed spectacular hand-to-hand fights between Indian and Chinese border guards in the neighboring Aksaichi region - and what will happen if a whole contingent is brought into the disputed Gilgit-Baltistan? It will be especially piquant if it coincides in time with some "anti-terrorist operation" of the Hindus in the south.

Obviously, Russia is interested in maintaining peace in this region: in the face of a tough confrontation with the West, it is important for us to have as good relations as possible with both China and India, and escalation will obviously not help them. But, unfortunately, the Russian Federation has limited opportunities to influence the development of events, and for the most part it remains to hope for the prudence of the direct participants in this game.
Reporterin Yandex News
Reporterin Yandex Zen
1 comment
Information
Dear reader, to leave comments on the publication, you must sign in.