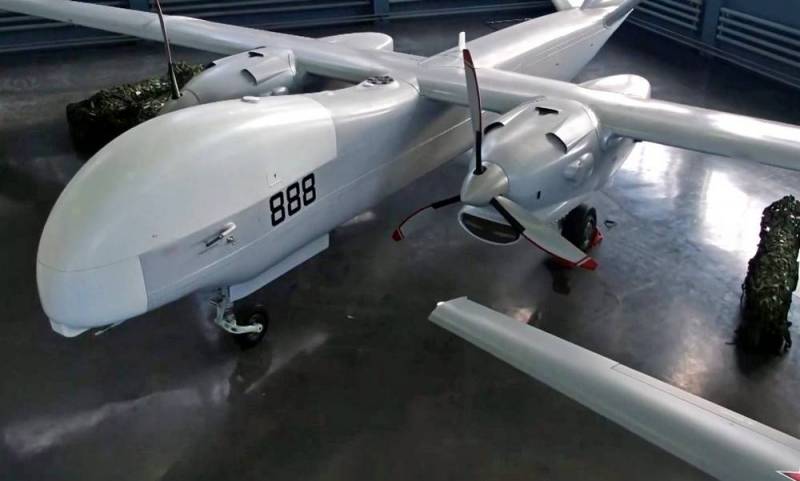 The special military operation in Ukraine has once again proved that without unmanned aircraft in a modern war, nowhere. UAVs actively conduct reconnaissance, provide data for target designation and correct fire on the battlefield. Also, attack drones like the Turkish Bayraktars are capable of very effectively hitting armored vehicles, inflicting sensitive losses. The experience of the confrontation between the Armed Forces of Ukraine and the Armed Forces of the Russian Federation for Zmeiny Island showed that the power of the anti-tank missile ammunition used by these UAVs is not enough to destroy even an armored boat with a direct hit. However, things will change very soon.

According to Russian media, Turkey successfully tested the heavy drone Bayraktar Akinci, which hit the target with an air-launched cruise missile using the LGK-82 laser target designation system. The UAV operated from a height of 9 kilometers.

Probably, we are talking about the Turkish SOM (Stand-off Mühimmat Seyir Füzesi) missile, which is the country's first national development on the topic of long-range weapons. The flight radius of a promising missile is an impressive 275 kilometers, weight - 590 kilograms, warhead weight - 230 kilograms. There are four modifications of the missile, it can be sea, land and air based, hit stationary and moving targets. In the air-based version, it should use American fourth-generation F-16 multirole fighters, possibly fifth-generation F-35 fighters, as well as heavy Turkish-made Bayraktar Akıncı UAVs as carriers.

The latter opens up a lot of new opportunities for Ankara. With a maximum takeoff weight of a twin-engine drone, its carrying capacity is 1350 kilograms - 400 kilograms of internal load and 950 external, there are six weapon suspension points, a maximum speed of 360 km / h, cruising - 240 km / h. The Turkish UAV can stay in the air for up to 24 hours, is equipped with an AFAR radar, artificial intelligence computers for control and a guidance system, which makes it an effective reconnaissance, strike and patrol aircraft.

Let's face it, against the Kurdish semi-guerrilla units, this is clearly too much. Having received a long-range anti-ship missile on a suspension, Bayraktar Akinci will become a big problem for the fleets of all potential opponents of Turkey - the Greek Navy and the Russian Navy in the Mediterranean and Black Seas.

The European Union is currently going in the same direction, having begun work on a promising heavy twin-engine reconnaissance and strike drone, which received the corresponding name - Eurodrone. This is a real giant, the length of which is 11 meters, the wingspan is 26 meters, the takeoff weight is 11 tons, and the payload is 2,3 tons. The UAV is driven by two pulling propellers. Eurodrone is a joint project of several European defense concerns - Airbus, Dassault Aviation and Leonardo, which we will discuss in detail told earlier.

At the initial stage, the European twin-engine drone will be armed with Hellfire "counter-guerrilla" missiles and Paveway laser-guided bombs. However, in the future, Norwegian Joint Strike Missile (JSM) air-launched anti-ship missiles with a range of up to 280 kilometers may appear on its suspension. And then the value of Eurodrone will increase dramatically, since everyone understands perfectly well who it will really be used against.

How will Russia respond to this?

Commenting on the success of Turkish partners, Deputy Prime Minister Yuri Borisov said the other day that the domestic Altius UAV also needs to be armed with anti-ship missiles:

The combat effectiveness of this drone is determined rather than technical the parameters of the unmanned vehicle itself, but the payload that it is capable of carrying. We are talking about an anti-ship missile at a range of 300 kilometers. We have similar aviation weapons. They need to be "married" with unmanned vehicles.
The Altius is a direct competitor to the Eurodrone and Bayraktar Akinci, a heavy twin-engine reconnaissance and strike drone. In size, it is closer to the "European": length - 11,6 meters, wingspan - 28,5 meters, take-off weight is 5-7 tons, depending on the modification. To reduce weight, the body is made of composite materials. The claimed time in the air is 48 hours, which is twice as good as that of the "Turk", and the cruising speed is 150-250 km / h.

There is not the slightest doubt that the Altius in the reconnaissance and strike version would be very useful to the Russian military and sailors during the special military operation to demilitarize and denazify Ukraine. Carrying out continuous patrols for two days from a height of up to 12 kilometers, such UAVs would make it possible to quickly control all movements of the Armed Forces of Ukraine and the Ukrainian Navy, provide target designation data, and adjust the fire of the RF Armed Forces. The presence of anti-ship missiles on the suspension would make it possible to lock the "mosquito fleet" of Ukraine in its last refuge and not disturb the Russian Defense Ministry with the prospect of landing enemy troops on Zmeiny Island.

Unfortunately, the implementation of this promising project ran into the notorious “engine curse”, and it is still unknown when the Altius will actually get on the conveyor with Russian power plants instead of the German ones with which it was originally designed. Alas, it is more likely that our Black Sea sailors will be the first to face the Turkish Bayraktar Akinci, which Kyiv may want to buy from Ankara.
Reporterin Yandex News
Reporterin Yandex Zen
12 comments
Information
Dear reader, to leave comments on the publication, you must sign in.