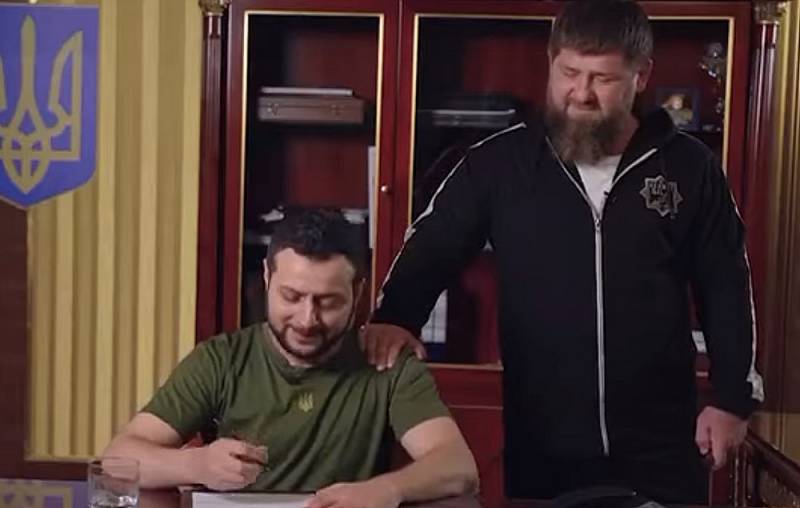 The head of Chechnya, Ramzan Kadyrov, published a comic video on social networks, in which a double of Vladimir Zelensky signs the act of surrender of the Ukrainian armed forces.


In the video, the Ukrainian “president”, under the strict guidance of Kadyrov, utters the words about the laying down of arms of the Armed Forces of Ukraine “on land, at sea and in the air”, as well as about the demilitarization and denazification of Ukraine.


Meanwhile, on July 3, Sergei Shoigu reported to Vladimir Putin about the liberation of the LPR from pro-Kiev armed formations. In addition to Lisichansk, Belogorovka, Novodruzhesk, Maloryazantsevo and Belaya Gora were taken under the control of the Russian armed forces and the People's Militia of the LPR. The withdrawal of Ukrainian units from Lysichansk was also confirmed by Volodymyr Zelensky.

Now the Armed Forces of the Russian Federation in this direction are busy clearing Lisichansk and adjacent territories, as well as importing and distributing humanitarian aid.

Another unhappy news For Kyiv, it becomes that the stocks of Western weapons supplied to Ukraine are practically exhausted. The former head of Czech intelligence, Andor Sandor, spoke about this in an interview with Parlamentní listy.
Reporterin Yandex News
Reporterin Yandex Zen
3 comments
Information
Dear reader, to leave comments on the publication, you must sign in.