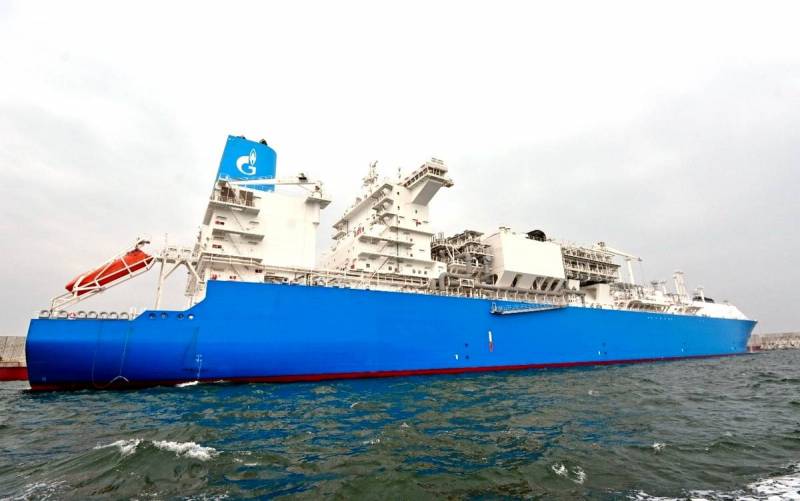 According to statistics, last June 5,5 billion cubic meters of liquefied natural gas were delivered to Europe and only 5,1 billion from Russia. Unpleasant, but true: the expensive American LNG still managed to squeeze Gazprom's products on the EU market. What are the real prospects for Russian blue fuel now?


Industry experts are reassuring a worried public that the defeat of our "national treasure" is temporary. There is indeed some truth in this statement. In the countries of Southeast Asia, at the moment, energy consumption has noticeably decreased due to the next wave of the pandemic and related restrictive measures. Gas prices fell, and it turned out to be more profitable for exporters to send LNG tankers to the Old World. There, on the contrary, right now passions are boiling over the situation in Ukraine. Deliveries of Russian gas to Europe are steadily declining, and its cost is growing noticeably against the background of the armed conflict and the need to prepare for the next heating season. After some time, there should be a rebound, and Gazprom will once again squeeze out LNG exporters from the United States.

However, already in the medium term, the Russian state corporation will inevitably lose a significant share of the European market, and there is nothing to be done about it. The EU leadership has adopted political the decision to reduce dependence on Gazprom at the expense of other suppliers. Of course, Europe will not completely refuse Russian gas, but its share will decrease significantly, and this place will be taken by LNG. From 2025, liquefied natural gas producers will launch new capacities and begin to build up the tanker fleet.

As a matter of fact, for the sake of this, among other things, the US Democratic Party started a coup d'état in Kyiv in 2014: to break business ties between Russia and the European Union, take the Ukrainian gas transportation system under American control, and then provoke a large-scale armed conflict between Kyiv and Moscow in order to make Gazprom unreliable. supplier and force Brussels to subscribe to the purchase of more expensive, but such a "democratic" American LNG. Alas, we have to state that Washington has achieved the set results. The question is, what should Russia do now? Where to get the usual "gas dollars" if the entire gas transportation infrastructure built for decades is geographically oriented to the European market?

Logic suggests that it is necessary to get rid of the main pipelines and switch to export to other markets by sea, which means that the stake should be placed on LNG. But, knowing all this, the competitors dealt a sanctions blow to the domestic LNG industry in advance. Will it manage to get back on its feet, or will Russia remain tied to gas pipelines?

Carried away by the construction of expensive main gas pipelines, Gazprom was objectively late to the division of the world LNG pie. Only in 2009 on Sakhalin Island, together with Shell (27,5% stake) and Japanese Mitsui and Mitsubishi (12,5% ​​and 10% respectively), he launched the first LNG plant. The second major player in the Russian market was the oil and gas company NOVATEK, which in 2018, together with the French Total (20% share in the project), Chinese CNPC and the Silk Road Fund (20% and 9,9% respectively) opened the Yamal- LNG".

In January 2021, Deputy Prime Minister Alexander Novak stated that the long-term program for the development of the industry provides for the construction of 10 LNG plants:

The implementation of potential LNG projects will allow Russia to almost triple the volume of LNG production by 2035 and additionally produce and monetize 2,5 trillion cubic meters. m of gas until 2040.
According to calculations, by 2024 Russia should have produced 65 million tons of LNG per year, and by 2035 - from 80 to 140 million tons. The plans are truly Napoleonic, and, alas, they are not destined to come true.

The United States and the EU countries, in response to the start of a special operation to demilitarize and denazify Ukraine, imposed restrictions on the supply of equipment and equipment to Russia. of technologiesused in the production of liquefied natural gas. The sanctions included imported installations for the separation of hydrocarbons in the production of LNG, cryogenic heat exchangers and pumps, as well as technological installations for cooling and liquefying gas. And this dependence on foreign equipment has called into question the future of the entire Russian LNG industry.

Thus, the first line of Arctic LNG-2, which was almost built by NOVATEK, is 98% ready, but not all equipment has yet been delivered for this platform. The second line is only 40% ready, the construction of the third has not even started yet. About the fourth experimental line "Arctic LNG-2", where the technology "Arctic Cascade" is being tested, we will describe in more detail later. Gazprom's construction of the Baltic LNG in Ust-Luga began quite recently, and the equipment for it also did not have time to arrive. Under this project, Severstal created a joint venture with the German company Linde, but the production of heat exchangers for large-capacity gas liquefaction in Ust-Luga was not 100% localized. It was assumed that the domestic LNG industry would reach this bar by 2030.

As you can see, we didn't. Now Russia will somehow have to get out, being under the yoke of Western sanctions. The launch dates for all ambitious LNG projects are objectively shifting to the right. What to do?

Here we should return to the Arctic LNG-2 project and its fourth line, called the Arctic Cascade. Its capacity is only a modest 0,94 million cubic meters per year compared to 6,6 million cubic meters per year for the first three lines using imported equipment. The thing is that original domestic technologies for gas liquefaction are being tested on it.

There are several different technologies for liquefying blue fuel, but in 2018 NOVATEK received patent No. 2645185 C1 for its own called the Arctic Cascade. The idea of ​​Russian engineers is very original, since it involves the use of arctic cold in the technological process, as well as ethane released from natural gas as a refrigerant. According to some bold calculations, this technology can provide a 30% reduction in the cost of LNG produced. The head of NOVATEK, Leonid Mikhelson himself, once boasted that Russian LNG from his company is already cheaper than American:

The cost of natural gas production at NOVATEK's fields is 2,5 times lower than quotations on the American national gas exchange Henry Hub.
And if we take into account the discount received through the use of domestic liquefaction technology? Truly a fairy tale. On the basis of the Arctic Cascade, it was planned to build the Ob LNG with three technological lines for 1,6 million cubic meters per year each. And all this - without Western technologies, only on the basis of a Russian patent!

However, in the future, for some reason, reports began to pour in that the experimental fourth line of the Arctic LNG-2 was unstable, which Leonid Mikhelson sadly told. Significant changes have taken place in the management of the NOVATEK project company. Information was leaked to the press in 2021 that due to problems with the Arctic Cascade, the Ob LNG will either be launched on imported equipment, or will be redesigned for ammonia production altogether. So think after that, either our engineers calculated something wrong, or, on the contrary, they did it so well and in an original way that the “invisible hand of the market” intervened, reinforcing Russia’s dependence on Western technologies.

Be that as it may, as of July 2022, there are no alternatives to domestic technologies and equipment, in principle, so you will have to strain your industry, and not finance American and German.
Reporterin Yandex News
Reporterin Yandex Zen
7 comments
Information
Dear reader, to leave comments on the publication, you must sign in.