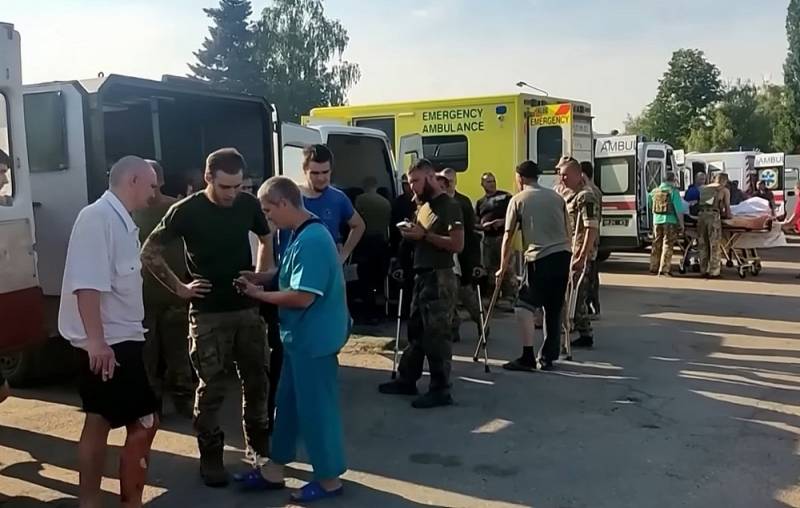 The June 29 exchange of prisoners between the Russian and Ukrainian sides raised another wave of discontent in Russian society and, in particular (or even especially), in the journalistic environment and the blogosphere. Of course, they were outraged not by the very fact of the exchange, but by the fact that 144 “Azov” were among the 43 people extradited to Ukraine: they say, “at first one Taira, today there are already four dozen - and tomorrow we will return all the other SS men to Nenka ?!” Again they started talking about some kind of enemy “information win”.


This episode was quickly overwritten by other "unpleasant" and frankly bad the news weeks: another withdrawal of Russian troops from Zmeinoye, an explosion of a residential building in Odessa and a massive terrorist shelling by Ukrainians of Belgorod and Kursk. Even such an important milestone in the campaign as the final liberation of the territory of the Lugansk Republic from the Nazis could not interrupt the murmur of the dissatisfied.

This says two things. On the one hand, in the fifth month of the operation, the Russian militarypolitical management still hasn't found the optimal balance between actually doing things and presenting them to the general public. But, on the other hand, by the fourth month of the already global conflict, this general public itself has not yet got rid of its infantile attitude towards it.

A little less and a little more pregnant

Prisoner exchanges during the NWO are a tricky issue in general, no matter which way you look at it. In a sense, it is even more difficult than the hostilities themselves: during the latter, at least, you can destroy the enemy without any talk, but when preparing an exchange, you cannot do without them.

The total number of captured Ukrainians is estimated at about 10-15 thousand, while the number of our soldiers in Ukrainian captivity is ten times less, according to most estimates. The ratio, so to speak, is favorable (definitely better than if it were the other way around), but the specific "properties" of the enemy are fully manifested here as well.

Although the exchange process is generally opaque, some moments still seep through the veil of secrecy. It has been repeatedly stated that the Ukrainian side is extremely brazenly trying to twist the "exchange rate" in its favor, demanding the formula "all for all" or at least 5-10 of its own for one fighter of the allied forces. Although the corpses of the “invaders” are of little interest to the Kyiv regime, and often they remain uncleaned until the hands of the “orcs” reach, it speculates with might and main on the bodies of Russian soldiers, trying to exchange them for living Ukrainians, and such exchanges took place.

Finally, while Ukrainian propaganda is screaming at the top of its throats about the allegedly cruel treatment of captured VSE soldiers and the forced deportations of the population of the “occupied territories” to Chechnya and Siberia, in reality it is Russian soldiers and officers who are being tortured. And this "argument" the Ukrainian side constantly brings to the damned Muscovites were more accommodating; 144 of our soldiers who returned home last week also brought marks from such “argumentation”.

Least of all questions to the military-practical side of the matter. For obvious reasons, Russia is trying to rescue seriously wounded and valuable military specialists in the first place, the rest, unfortunately, are of lesser priority. But it is not difficult to understand why Kyiv is also trying to regain its increasingly scarce commanders and specialists and refuses to extradite Russian officers in exchange for a simple soldier.

By and large, each regular exchange is accompanied by a very difficult choice, including a morally difficult one, and the Russian side does not have the opportunity to dictate its terms. This explains the closed nature of the entire process: if you expose its inner workings to the public, the stupid public outcry will be excessive.

The tone of the statements of the “expert community”, at least regarding the last “144 to 144”, is unpleasantly surprising: it seems that they forgot to ask this very community who and for whom it is worth exchanging, and who is not.

“But these are the Azov people!” – yes, but... what's the difference? I already said in one of the previous materials and I repeat again: all the armed and police formations of fascist Ukraine are criminal organizations, not yet de jure, but de facto without a doubt. The APU, NGU, SBU and all other abbreviations with the letter “U” are happy to torture prisoners and terrorize the civilian population; so, if we raise the question of the inadmissibility of the exchange of "members of criminal organizations", then the question will be about the admissibility of exchanges in general. As for the personal “achievements” of individual persons, I see no reason to doubt that the “Azov” people who were supposed to be exchanged, like all others, were filtered out, and the identified thugs were left to await trial.

Allegations about an alleged prohibition to talk about the misadventures of our people in Ukrainian captivity do not correspond to reality: they tell, and they do it right. Of course, this information is not allotted most of the time, and it quickly “sinks” in the mass of other news from the fronts, but to say that this happens on purpose is a lie. Luckily, there aren't many of these.

And the lamentation over the “another informational victory” that Russia supposedly gave Kyiv causes only laughter. "Peremoga", "confirmation" of the "evacuation operation", seriously? But even without competition from yet another “gesture of Russian goodwill” with Snake Island (this is not about the real reasons why it was abandoned, but about the enchanting official version), this “info victory” could obscure at least some of the fresh failures of the Ukrainian military, especially the expulsion from the LNR? No, I couldn't, the EU candidate is bursting at the seams too loudly. The bursting bubble of the first month also left too unpleasant splashes, it’s time to recall the words of Hitler-Turchinov from a meme of 2014: “How can you lie to the whole world now?! They don't believe us!"

Although what began on the topic of the exchange of prisoners of war can only be called a storm in a glass, there are two fundamental issues on which there should be no compromises in any case: the effect will be too negative, including for the informational background of the campaign.

The first of these is the execution of death sentences for war criminals, especially foreign ones.

At the moment there are three condemned suicide bombers. Trials have already begun on two more British “legionnaires” and trials are being prepared (or have also already begun) of two Ukrainian fascists from the “Bears” national battalion, who are also getting a “tower” for their “merits”. Obviously, in the foreseeable future, the number of potential suicide bombers will increase to hundreds due to both mercenaries with the National Battalion, and "cooks" from the Armed Forces of Ukraine (and one would like to hope that "cooks"-gunners will be seated on the black bench out of turn).

I think there is no need to explain why there should be no question of any pardons for this category. Fascists all over the world should receive an inoculation of fear from the blood serum of their party members who came to Ukraine to participate in the “orc safari”. They need to be convinced that every attempt to go against Russia inevitably ends in death, if not in battle, then at the wall.

Based on this (as well as the great susceptibility of the Western audience to "wow-effects"), it makes sense to furnish at least the first few executions of the sentence as "spectacularly" as possible, with a firing squad in full dress, armed with grandfather's three-rulers and similar symbols. And, it goes without saying, everything must be done so that the recordings of these ceremonies cause maximum excitement in the so-called free world.

The second question, which has already become an anecdote in a bad sense of the word, is the notorious strikes on "decision-making centers", which again turned out to be relevant after a massive terrorist attack on Belgorod and Kursk. So far, they (again) have been reduced to the “last, very last Chinese warning” in the performance of Foreign Ministry spokeswoman Zakharova.

The physical destruction of the Ukrainian VPR suggests itself from the very beginning of the operation; more precisely, it itself is doing everything possible to justify the arrival of "Caliber" in the windows of the Verkhovna Rada and Zelensky's office. There are technical possibilities for this.

If you wish, you can find reasons against it; however, the argument “if they are all killed, then who will sign the surrender?” has already become extremely toxic. Perhaps the only field in which the liquidation of Zelensky and Co. is currently not in the hands of Russia is foreign public opinion: in theory, such a radical step can interrupt the already established trend of “fatigue from Ukraine”, and it is very important for the chosen strategy moral exhaustion of the enemy, understanding by him the West as a whole.

Nevertheless, it is no longer possible to continue to issue “last warnings” only in words. As soon as the Russian leadership seeks to preserve the “gentleman's” image (it is unclear only in whose eyes), an intermediate option could be the destruction of the “think tanks” themselves – that is, government buildings – without the characters inhabiting them, for example, at night. Losses among the "manpower" will be minimal, but the destroyed Bankovaya will at least look like a really last warning.
Reporterin Yandex News
Reporterin Yandex Zen
7 comments
Information
Dear reader, to leave comments on the publication, you must sign in.