Why is abortion banned in the US? 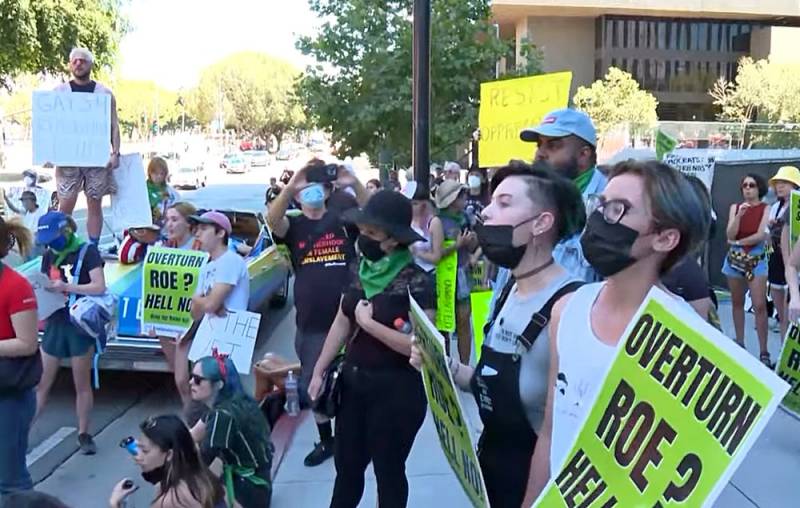 As Biden gazed at the Bavarian Alps at the G7 summit, Trump's "conservative majority" Supreme Court overturned state governments' ban on whether or not abortion is acceptable.

The Constitution does not give the right to abortion... the power to regulate abortion has been returned to the people and their elected representatives, the Supreme Court said in a statement.
After this decision, the ban on abortion automatically entered into force in six states: Louisiana, Missouri, Kentucky, South Dakota, Oklahoma. And many others will follow suit. There were mass protests in 18 states against the decision of the Supreme Court. Biden himself condemned this decision, although he has no legal leverage to influence the situation.

Other "leaders of the free world" also became agitated. Thus, Macron wrote that abortion is a fundamental right of women, and added:

I want to express my solidarity with the women whose freedoms are undermined by the United States Supreme Court.
Johnson said it was a big step back.

No government, politician or man should tell a woman what she can and cannot do with her body.

In fact, the judges of the Supreme Court and the American politicians nothing to do with women's problems with abortion. In America, medicine is paid and depends on the level of insurance, which not everyone can afford. In the US, there is no "maternity leave" and social support for families with children. State social insurance Medicaid, available only to those who prove that he is poor, covers abortions only in cases of rape, incest and a threat to the life of the mother.

America is a free country in which everyone is left to himself. This is a market jungle in which the one whose starting conditions are better survives, and the “strongest” rises. It makes no sense for the government to care about demographics, since the labor force can easily be replenished through migration. Millions of fools drugged by Hollywood films are trying to infiltrate the United States to join the army of drivers, security guards, porters, servants and the homeless. Hundreds of thousands of highly skilled professionals and talented kids from all over the world are moving and being transported to the United States as part of programs to "brain drain" from poor countries.

It would seem that in such a free country there is no place for a ban on abortion. But America is not only a free country, but also a democratic one. True, in all matters except money. In the sphere of money, capital, finance, there is no democracy, there is only the dictatorship of Wall Street and corporations. Just like in the catchphrase of the cult film: "In America, in general, everything is just like that, except for money."

So, a significant part of Americans are believers and God-fearing people, therefore they oppose abortion. Especially middle-aged and elderly Americans, who, having become decent, have already forgotten about their own valiant debauchery and are outraged by the “free morals” of young people. It seems to them that promiscuity promoted by films, series, TV, media and stars became possible only after the introduction of the right to abortion 50 years ago. They want to stop the spiritual decay of American society by appealing to the morality of previous generations. Therefore, to say that the decision of the American state (both at the federal level of the Supreme Court and at the state level) is not based on the will of some part of society is wrong. Another thing is that society is split on most issues.

The politicians behind the Supreme Court decision are warming up the public for election battles. It is important for them to stir up the people, raise a wave of indignation and hear cries of approval. All this is being done not even to spoil the Democrats and Biden, but in general to keep the current two-party political model afloat.

The government in the USA, strictly speaking, is anti-people in nature, it does nothing for the people, and if it does something, it is only under the pressure of circumstances and in fear of fermenting discontent, protests and pogroms. American society is objectively split into the top - financial bigwigs, the rich, rentiers, leading an idle and chic lifestyle - and the bottom - the "middle class" pulling the credit strap and all those "losers" (mostly "colored") who dream of being in it get in. And, as mentioned above, the state only strictly monitors the "correct distribution" economic potentials.

But subjectively, American society is split along a dozen different issues - from abortion and racism to "animal rights" and the environmental agenda. An important role here is played by the political confusion of various petty topics, such as the right of a woman to have an abortion. The fact is that in the whole spectrum of these subjective discussions and polemics, the two leading ruling parties always take polar positions: the Democrats seem to be more progressive (for everything new and fashionable), and the Republicans are more conservative (for everything traditional and old). And at the same time, they simultaneously inflate and provoke these contradictions themselves in order to hide from the public a simple truth that is clearly visible from the outside: both Republicans and Democrats, while in power, pursue the same policy on all fundamental issues and serve the same social forces.

Many observers point out that US foreign policy is always suspiciously closely linked to domestic policy. It also happened that the military-political leadership of the United States began hostilities thousands of kilometers from its borders only in order to divert the attention of the public from some delicate scandal. To most, such irresponsible behavior seems to be a sign of the self-isolation of American policy on domestic issues. Although in fact, everything is just the opposite. The modern American state is something like an empire that lives only at the expense of the outside world. The US economy is closely integrated into the world market, American corporations control the main commodity flows of world trade and a huge mass of capital scattered all over the world. The American state is not about internal affairs, it is the powerful tentacles of the leviathan of world economic and military hegemony - Anglo-Saxon capital. And on the territory of the United States, minor, insignificant administrative issues are being resolved and a vivid political show is being played out for the townsfolk. But, on the other hand, the intra-American situation is the most vulnerable zone of US hegemony, because the loss of power or the start of a civil war threatens American corporations with an economic collapse. That is why it is beneficial for interested parties to fan political squabbles that would support the veil of a two-party model and democracy.

On the same issue of abortion, there has been some consensus over the past 50 years, albeit in favor of the Democrats. But the Republicans, through their judges, deliberately destroyed it in order to once again plunge the American society into empty discussions and protests and warm up the future election campaign of the Nanai boys.

Why is the issue of abortion in the US fruitless?

The reader may be indignant: how is the right to abortion insignificant? Of course, for an individual, the absence or presence of legal abortions plays a certain role, especially if you are a “flying” young girl or an unlucky walking youth. But such things as demographics, child care and youth education should not be decided in private, they are of public importance. It is liberals who preach extremely individualistic principles in all matters without exception (“my body is my business”, “my money is my happiness”, “my house is my castle”, “the customer is always right”, etc.).

The situation in the US is such that the absence or existence of the right to abortion does not solve the problems that result in unwanted pregnancies. How the general population views abortion is fundamentally irrelevant.

If we assume the existence of an ideal, healthy society, then there will be no place in it for artificial termination of pregnancy not for medical reasons. The numerical growth of society is the growth of its potential, the expansion of its capabilities and power. But ideal social conditions do not exist, so in some cases the practice of abortion is quite reasonable. For example, in our country after 1917, abortions were legalized due to the difficult economic situation of the country. I draw your attention: not because this is a “natural right of a woman”, as it is often presented, but because the state was unable to properly ensure the conditions for the emergence and formation of a new life.

The idea of ​​such a “natural right” arises only if society does not take care of children, does not protect motherhood, and does not create conditions for the entry into the life of new generations. When officials say “the state did not ask you to give birth,” a woman naturally perceives the situation as hostile, and pregnancy as her own business.

As soon as conditions improved in the USSR, collectivization and industrialization began to boil, abortions were delegalized. The resolution of the Soviet government was as follows: “On the prohibition of abortions, the increase in material assistance to women in childbirth, the establishment of state assistance to large families, the expansion of the network of maternity hospitals, nurseries and kindergartens, the strengthening of criminal penalties for non-payment of alimony, and some changes in divorce legislation.” Even by the name it is clear that society, represented by the state, took care of children, therefore, the basis for the right to abortion fell away.

One can also recall the Chinese experience of "one family - one child", when the state artificially limited the birth rate for the same economic reason - it was difficult to feed such a huge population in a country with little arable land and low labor productivity. As soon as China reached the required level of food production, the ban was lifted, and a policy of stimulating the birth rate is now being implemented. It is easy to predict that if the Chinese economy continues to grow and child care expands, then a ban on abortion will follow.

If society takes care of childhood, motherhood, new generations, then the causes of unwanted pregnancy are eradicated, only private whims remain.

In the US, dissonance has now arisen: on the one hand, society and the state do not show proper care for young families and mothers, on the other hand, they deprive women of the right to decide whether to leave a child. Hence the indignation of women and some part of the public. The latter think narrowly, but their logic is fair. Those who are for the ban on abortion think more broadly, but in complete isolation from the real conditions of life. Within the framework of liberalism and individualism, their contradiction is insoluble, but it plays into the hands of unscrupulous politicians who do not want to subordinate the American state to the needs of the people, diverting public attention to private contentious issues. Here, as with racism, feminism, "cancellation culture", this is done in order to fill the purely formal political struggle of the two parties with catchy content.
Reporterin Yandex News
Reporterin Yandex Zen
5 comments
Information
Dear reader, to leave comments on the publication, you must sign in.