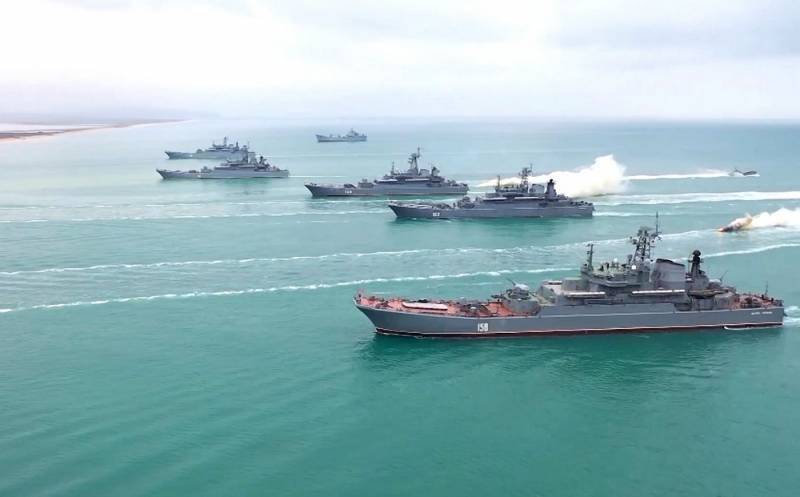 On the eve it became known that the sunken large landing ship "Saratov" was raised in the port of the city of Berdyansk. This BDK was the first, but, unfortunately, far from the last warship lost by the Russian Navy in the Black Sea during a special operation to demilitarize and denazify Ukraine. Could this tragedy have been avoided?


"Saratov" refers to the large landing projects of project 1171 ("Tapir"), built in Kaliningrad at the Yantar plant. BDK of this type are intended for the transfer by sea of ​​troops and various cargoes, including tanks, with their landing on an unequipped coast. The Saratov is one of the oldest ships in the Russian Navy; it was launched back in 1964 and was commissioned in 1966. In total, 14 BDKs of the Tapir project were built in the series, but only three have survived to this day.

If you believe the statement of the representative of the military-civilian administration of the Zaporizhzhya region Vladimir Rogov, on March 24, 2022, the Saratov was sunk right in the port of the city of Berdyansk by a hit by a Ukrainian Tochka-U ballistic missile. According to publicly available video recordings, the attack resulted in the detonation of unloaded ammunition, and the ship sank. It is not yet known for certain whether he himself "swallowed water", or whether he was so promptly sunk in order to avoid further explosions in the port. Also during the attack, other Russian large landing ships were also damaged, but they remained afloat, their crews coped with the fire and safely removed them from the shelling zone.

The death of the Saratov became a tragic page in the history of the Black Sea Fleet of the Russian Federation, but, alas, not the last. All subsequent losses of Russian ships demonstrated the presence of a critical problem in the form of a weak sea-based air defense system. But the old BDK had no chance of surviving, in principle, since the Tapir project, built in the sixties of the last century, could not really oppose Tochka-U with anything.

All of its anti-aircraft weapons are represented by one 57-mm twin anti-aircraft artillery installation ZIF-31B and MANPADS "Strela-3". Tests of the ZIF-31B shipborne anti-aircraft artillery mount took place in 1954-1955 and showed that the rate of fire for the left machine gun was 75 rounds per minute, for the right one - 53 rounds. The loading time of the racks on the machine was 2 minutes 10 seconds, the cooling cycle was 1 minute 36 seconds. The anti-aircraft gun was adopted in 1956 with the following recommendations from the selection committee:

The use of ZIF-31B on the ship pr.561 is possible with a sea state of up to 5 points. When shooting at night, a strong flame. The fragmentation tracer adopted in 1957 has a self-destruction time of 13-17 s, which is not enough, it should be 20-22 s to provide a range of fire at air targets up to 7500-8000 m. For firing at sea targets, it is necessary to speed up the development of a high-explosive projectile.

At the same time, the ZIF-31B artillery mount does not have remote control and can only fire at the AMZ-57-2 sight in manual mode. In general, to put it mildly, this is not quite what is needed to intercept a ballistic missile. It is also hardly worth expecting such miracles from a sailor with Strela-3 MANPADS. That is, in fact, all of our old BDKs are completely defenseless against air attack, and should have been used only under the cover of the air defense "umbrella" of sea-based escort warships or land-based air defense in the port of Berdyansk.

If you look at the experience of our potential adversaries, the Americans are trying to provide their own anti-aircraft protection even to universal landing ships, despite the fact that they are able to provide them with a reliable cover order. Yes, UDC and BDK are ships of different classes, but nonetheless. For example, all 7 of the remaining amphibious assault ships of the Wasp type are equipped with 2 × 6 - 20 mm. ZAU Mk. 15 "Phalanx" and 3 × 25-mm ZAU Mk. 38 Bushmaster. By the way, they do not forget to arm these “useless and defenseless vessels” with missiles: 2 × 8 Sea Sparrow and 2 × 21 Mk. 31. The Amerika-class amphibious assault ships carry 3 × 20 mm Mk15 Phalanx and 7 × 12,7 mm machine guns as anti-aircraft artillery, as well as 2 Mk29 ESSM air defense systems and 2 Mk49 RAM air defense systems. Well, and, of course, various electronic weapons.

In general, contrary to the imposed stereotype, not so UDC and “defenseless huge targets”, as they are sometimes trying to portray. Plus a warrant of multipurpose frigates and destroyers.

The sooner the Russian Navy replaces the outdated Tapirs that do not meet the challenges of the time with modern large landing and universal landing ships, the better.
Reporterin Yandex News
Reporterin Yandex Zen
34 comments
Information
Dear reader, to leave comments on the publication, you must sign in.