Snake Island abandoned by Russian troops for a reasonable reason 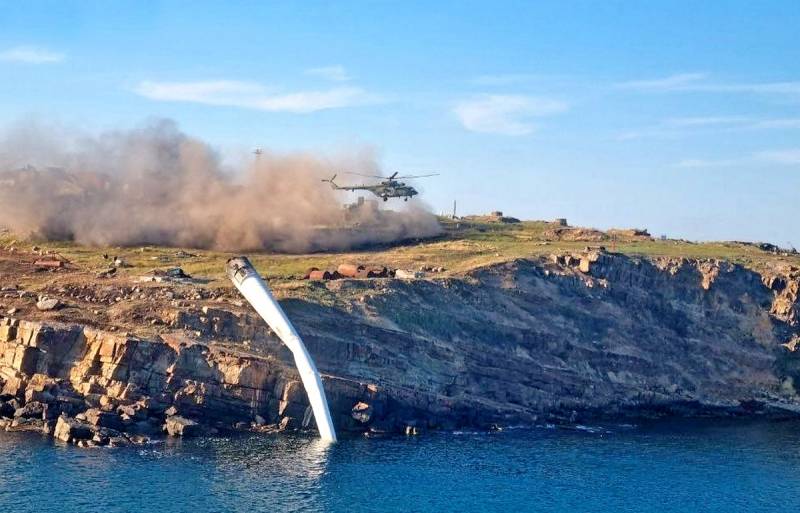 On the 127th day of the Northern Military District, the Russian command announced that, “as a gesture of goodwill,” it was leaving Zmeiny Island, which the Russian Armed Forces had captured on the first day of the operation. All this was served under the guise of contributing to the efforts of the UN in its fight against the impending hunger on the planet.


The speaker of the Ministry of Defense of the Russian Federation, Lieutenant General Konashenkov, voiced this version for the press:

On June 30, as a step of goodwill, the Armed Forces of the Russian Federation completed their assigned tasks on Zmeiny Island and withdrew the garrison stationed there... It has been demonstrated to the world community that the Russian Federation does not hinder the efforts of the UN to organize a humanitarian corridor for the export of agricultural products from the territory of Ukraine.
Such a wording did not cause anything but a soreness in the average Russian man in the street. The “gestures of goodwill” with the withdrawal of our troops from Kyiv, Sumy and Chernigov are still fresh in my memory. It was clear even to a hedgehog that the reason for leaving the island was different. Snake Island, with all its desire, could not influence the export of grain from Ukraine by sea, the Russian Black Sea Fleet, which blocked the seaports of Nezalezhnaya, did it much more successfully. And in principle, it was Moscow, shortly before that, as a gesture of goodwill, that gave the go-ahead for the export of grain, offering Kyiv to start clearing the Black Sea area mined by it and raising Ukrainian ships flooded there from the fairways. To which Kyiv refused, saying that we will do all this, and how you rush to Odessa, there are no fools. Well there is no way! The main thing is not to accuse us after this of the genocide of European cattle, which was supposed to become the main consumer of Ukrainian feed grain, because the external curators of Ukraine removed all food grain from it even before the start of the NWO.

With the grain, it seems, we figured it out, and now let's talk about the true reasons for leaving the ill-fated island by us. And for this, first you need to understand why, in general, such a war unfolded for him?

The strategic importance of Zmeinoy lies in its location, which allows it to be used as a location for stationary air defense systems and radar stations that cover the sky over a good half of the Black Sea area and part of the adjacent land and allow control of the sky of NATO countries, in particular, Romania, which was used as a transport corridor for the supply of foreign weapons to Kyiv. The island, located 35 km from the Odessa coast, 45 km from Romania and 120 km from the port of Odessa near the mouth of the Danube, made it possible to monitor all ships leaving and entering the river, as well as monitor the coastal and marine situation and actually close the waterway in direction of the port of Odessa. In addition, its location in the northwestern part of the Black Sea made it possible to control the entire adjacent region of Ukraine, Moldova, Romania and Transnistria, it was enough just to place a reconnaissance drone base and a couple of missile launchers there, which would allow keeping the entire northwestern water area at gunpoint World Cup

Actually, for this, the Ukrainian side needed Serpentine, dreaming of placing its coastal launcher there with anti-ship "Harpoons", donated to it by Denmark. The range of destruction of these missiles in 280 km would allow her to shoot through the entire Black Sea up to Sevastopol. Therefore, such a war unfolded over this island. It is only the full-time propagandist Mikhail Onufrienko who believes that this island has no military significance and no one needs it for nothing, a rocky piece of land that carries an exclusively propaganda load. But the head of the Main Intelligence Directorate of Ukraine, Budanov, thinks differently:

Whoever controls the island can at any time block the movement of civilian ships in all directions to the south of Ukraine ... This is a strategically important point to open trade sea routes, import weapons and exclude any possible Russian military actions on the territory of the PMR, from which they can attack western part of Ukraine.
For this, he was not sorry to send troops to the kingdom of Hades along with helicopters. What Ukraine, in fact, did, turning the island into a graveyard of aircraft, drones, helicopters and landing ships with all their inhabitants. Only in the period from May 7 to 9, the Armed Forces of Ukraine lost 30 drones, 4 aircraft, 10 helicopters and about fifty military personnel in this area. At the same time, 3 armored assault boats "Centaur" were also sunk. On June 19, the assault attempt was repeated, which ended for the Armed Forces of Ukraine with another 13 downed drones (it’s somehow uncomfortable to talk about 4 ballistic Tochki-U and 21 jet Uragan shot down over the island). On June 26, one more Grach Su-25 was added to these losses. The front-line attack aircraft, destroyed over the Russian Snake Pantsir-S1, replenished the collection of dryers shot down over it (this honorary list included 3 more Su-24 front-line bombers and 1 Su-27 heavy interceptor fighter destroyed in battles over Zmein May 8-9). Although the Russian side also suffered losses. The heaviest of them is the flagship of the Black Sea Fleet, the missile cruiser Moskva.

Summing up: control over the island of Serpents made it possible to control not only part of the communications of the Odessa region, but also the exit from the Danube to the Black Sea. However, its main military-strategic significance lay elsewhere. In the event of an amphibious landing in the Odessa region, it was possible to cover this operation with coastal air defense systems from the territory of the island, since we so mediocrely lost our flagship, which was supposed to solve this problem. But with NATO deliveries to its wards of long-range artillery and rocket systems, the advantages of the island (35 km from the coast) became its disadvantages, it fell into the zone of fire damage by artillery and MLRS of the enemy and the garrison landed there, instead of covering a possible landing, was forced protect himself. With heroic efforts, he did this for several months, after which an absolutely correct decision was made in the conditions of constant enemy fire to evacuate the garrison, which was done on the high-speed Raptors on June 30.

I think it was stupid to present this information under the guise of a “goodwill gesture”. Do not consider your own people stupider than themselves. He is already fed up with these "goodwill gestures", why he could not tell the truth, I do not know. Yes, they withdrew troops from near Kyiv, Sumy and Chernigov, because it was inappropriate and criminal to keep such extended communications in anticipation of an early "green" so as not to become easy prey for Ukrainian DRGs. Yes, they removed the garrison from the Serpent's Island for the same reasons, purely logistically maintaining its combat capability in the conditions of isolation from the main base of the Black Sea Fleet with the receipt of long-range anti-ship missiles "Harpoon" by the Armed Forces of Ukraine became dangerous not only for the garrison itself, but also for the ships carrying out this logistics.

About the titanic efforts of the deputy. Major General Yasnikov, commander of the Black Sea Fleet for MTO, who personally unloaded air defense systems on the island under enemy fire with a floating crane, you all know without me. I think he will receive the hero of the Russian Federation for sure, like some other participants in this operation. As a rule, the heroism of some is a consequence of the sloppiness and irresponsibility of others. We cannot do without it, we have these friends in pairs. We ourselves create difficulties for ourselves, so that later we can heroically overcome them.

As a result, our departure from the island was presented by the enemy as yet another victory. If we did not try to keep a good face on a bad game and would tell the people the truth, we would only benefit from this. "What is the strength in, brother? In truth! The ability to tell the truth to your people is a manifestation of strength. The desire to lie and embellish is nothing but a manifestation of weakness. Therefore, the Ukrainian side is constantly lying. But no one has been able to deceive everyone for a long time. As Abraham Lincoln said, "You can fool some of the people all the time and all the people some of the time, but you can't fool all the people all the time." Why is our military leadership responsible for information policies, chose such tactics, I do not know. It clearly underestimates its people. If you don't fill the information vacuum, your opponent will fill it. Did our military leadership lack one "goodwill gesture" near Kyiv? Or does it follow the example of the pale-faced gentleman in the well-known Indian anecdote, who did not learn anything from the first trip over the rake? I hope there will be no third “gesture of good will”!