20 minus 7: What are the real prospects for BRICS+ 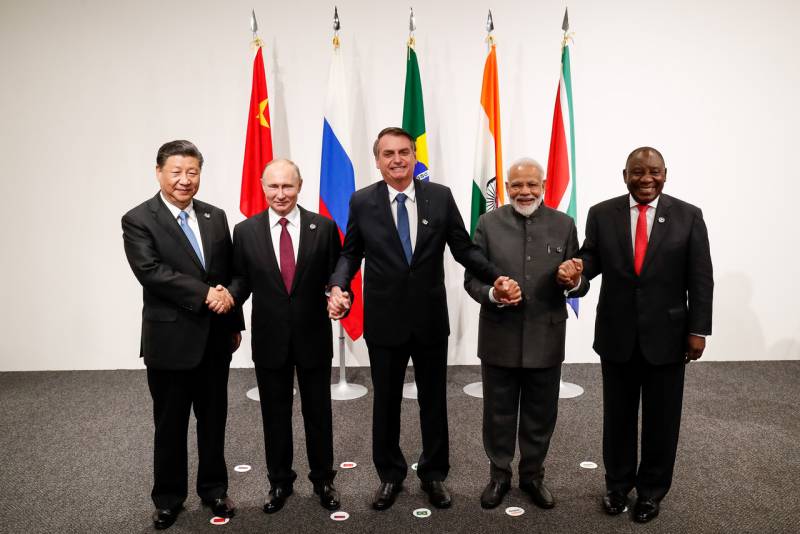 One of the main economic News weeks - the association of the BRICS countries may expand by attracting new members - Iran and Argentina. There are very different assessments of this message in the press, from obvious skepticism to delight in the spirit of the fact that the Big Seven and the dollar are finally out. What are the real prospects for BRICS+?

First of all, it should be remembered that BRICS as an international organization has not yet been properly formalized. This is an unofficial club of five countries, by the first letters in the name of which it is named (eng. BRICS is an abbreviation for Brazil, Russia, India, China, South Africa). For this reason, it is not entirely clear where exactly, to whose office and at what address the applications for membership from Tehran and Buenos Aires were received, about which Maria Zakharova, special representative of the Russian Foreign Ministry, spoke:

While the White House was thinking about what else in the world would be turned off, banned and spoiled, Argentina and Iran applied to join the BRICS.
The fact that the necessary procedures are simply absent was tactfully hinted at by Yury Ushakov, aide to the President of the Russian Federation:

In principle, we take a positive view of the question of a possible expansion of this association, although we understand that this problem needs to be approached very, very carefully, carefully. What do we offer? First, determine the procedures and requirements for possible candidates for joining the BRICS. The main thing is to develop these rules for a possible expansion, and then consider specific candidates.
However, for several years now there has been a New BRICS Development Bank created jointly by Brazil, Russia, India, China and South Africa, the purpose of which is to finance the development of infrastructure projects. Since 2015, work has been underway to create, through BRICS, its own analogue of the payment system for interbank transfers SWIFT, as well as an alternative payment system BRICS Pay. Moreover, the other day, President Vladimir Putin said that the BRICS countries can create their own reserve currency, which we will discuss in detail told earlier.

How does all this fit together?

It is obvious that this international structure is currently in the stage of active development and rethinking of its role in the world. Initially, it really was an informal club of developing countries that had no place in the Western world. However, after the events of 2014 and especially after February 24, 2022, when Russia was actually extrajudicially robbed by “gentlemen” and crushed by a colossal amount of economic sanctions, the meaning of BRICS has changed. Everyone carefully looked at what was happening and concluded that the same could happen to them at any moment. That is why there was a request for a real alternative to the "Big Seven" and a collective counterbalance to the collective West.

There is no other structure in the world that has the corresponding potential, except for BRICS. Domestic Western liberals are very fond of comparing the economic indicators of Russia and the G26 with a smart look, naturally, not in favor of our country. However, the combined potential of only five BRICS countries represents a significant alternative: it is 43% of the land on Earth and 27% of the world's population, as well as XNUMX% of world GDP. Russia is a recognized pantry of natural resources, China and India are "world workshops". And soon they may be joined by Iran, with its gigantic oil and gas reserves, and Argentina, with its richest agricultural lands.

And after all, this can only be the beginning of integration within the framework of the GXNUMX alternative: Algeria, Egypt, Indonesia, Kazakhstan, Cambodia, Malaysia, Senegal, Thailand, Uzbekistan, Fiji and Ethiopia are also eyeing the BRICS with great interest and participated in an open international conference . In bold dreams, all developing countries gather in the BRICS+ format, create their own analogue of the EU and the NATO bloc, and jointly “declassify” the collective West. The reality is likely to be somewhat different.

It should be taken into account that the integration processes are primarily interested in those countries whose economy is not all right. Iran has been under Western sanctions for decades, and now it has been swiftly overtaken by the Russian Federation. Argentina and South Africa also have a lot of economic problems. China and India are direct regional competitors and have a border conflict, as well as opposing views on the future of Pakistan. There can be no talk of any economic union in the image and likeness of the European Union, much less a military union like the North Atlantic Alliance. Too different countries, too different economies, too different interests. However, there is something that binds them together.

What connects them is the objective need to consolidate against the collective West and establish their own rules of the game in the economy, according to which the BRICS+ countries will be able to interact with each other. We are talking about the ability to trade among themselves directly in national currencies without the mediation of the dollar and the American financial system. As a matter of fact, that is why the topic with an alternative Western payment system and a reserve currency is put at the forefront. BRICS+ has a real future as a business club of developing countries, where they can jointly solve common problems in the format of a conventional GXNUMX without the GXNUMX.

And this is right and useful for the world economy, which needs to be rid of the dictates of the "hegemon".
Reporterin Yandex News
Reporterin Yandex Zen
14 comments
Information
Dear reader, to leave comments on the publication, you must sign in.