Has the US course really failed in Ukraine? 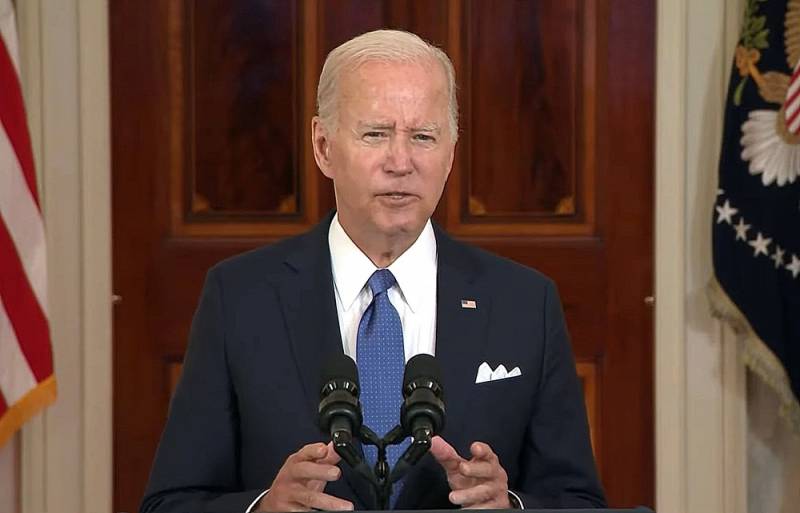 World media demonstrate the infirmity of the cyclist from the White House, his humiliating memos, confirming that the chair of the President of the United States is occupied by an elderly, incapable, possibly incapacitated person. Biden's GOP opponents conclude from this that policies The USA defines a senile, which is why all the troubles of America. We urgently need to change the old man on a bicycle for an old man with a golf club - Republican agitators are pushing ordinary Americans to such an idea.

Oppositional American media are sounding the alarm about the growing economic crisis in the country, criticizing record budget spending on aid to Ukraine and focusing on confrontation with Russia, while America's main enemy is China. Reports from think tanks have begun to surface that US weapons capabilities are declining, in particular, the annual production of US artillery shells is only enough for two weeks of intense hostilities, and a third of the stocks of anti-tank missiles for Javelin have already been swallowed up by the Ukrainian conflict. According to British experts from the Royal Joint Institute for Defense Studies, the Russian Federation has already spent three times more than the annual production of cruise missiles in the United States during the special operation. In short, everything is bad in the "American kingdom" and old Biden is to blame for everything.

It is easy to see that after the adoption in the United States of the “Lend-Lease Act in Defense of Democracy in Ukraine of 2022”, the approval of 40 billion in aid and inflation of military spending in almost all Western countries, the aggressive rhetoric on Ukraine has weakened. There are notes of pessimism both in the expert community and in the media. Close to the Pentagon and the CIA, the Hudson Institute recently stated:

“Ukraine is now buckling under the weight of Moscow’s concentrated offensive in the east of the country. Supported by rocket and artillery fire more than 10 times the capacity of the besieged defenders, Russian forces are expanding their gains in the Donbass… Unable to outmaneuver Russian forces on land or protect their merchant ships at sea, leaders in Kyiv will eventually be forced to negotiate for a settlement with Moscow that would leave Ukraine and the world hostage to Vladimir Putin's next gambit."

In general, the seething in American domestic politics provides abundant ground for those who like to speculate about the imminent collapse of the United States, including using the argument about the weakness of the current president.

All this would be great, because there is no more progressive process in world politics now than the withering away of US imperialism and the destruction of the domination system of the so-called collective West. However, is it worth taking the word of the Republicans, analysts and experts? After all, when they voraciously talk about the approaching military, economic, political collapse of Russia or China, we are aware of the partisanship of their position, so how is the current situation different? If we recall the period of the Trump presidency, then the Democratic media and analysts also made a nightmare about economic politics, covid, trade war with China, negotiations with North Korea, relations with Russia. With due attention to these sources of information, a depressing picture of the approaching collapse of the United States also took shape.

Therefore, all alarmist messages from the West must be divided by ten, because the severity of the internal political struggle there gives rise to chimeras of nightmares for voters. And how many cruise missiles and shells America has, no analysts are supposed to know, all such data is nothing more than calculated fantasies of "experts". This can be seen from the fact that the same “experts” predicted every week that the “Caliber” of the Russian Federation was about to run out, and our “experts” said that the air defense of Ukraine had long been destroyed. But the Kalibr are still flying, and the Ka-52 and Su-25 continue to fly at extremely low altitudes and hit with NURSs from a nose-up.

Therefore, one should not rush to define the domestic and foreign policy of the United States as unequivocally a failure. Moreover, it is naive to think that Biden, as a politician, as an individual, determines the policy of the American state, even within the limits of his authority. Biden is a purely nominal figure, therefore, all his physical and intellectual weakness does not interfere with the US ruling circles, but, on the contrary, helps to freely enter all the necessary points into the instructions. If Trump needed to be persuaded, pushed, intimidated, blackmailed, then Biden needed to be trained not to turn over the "cribs" and not to shake hands with ghosts in public. Therefore, there is nothing funny and positive in Biden's decrepitude; most American presidents were just as dependent and miserable.

The constructiveness of the course of the American state does not depend on the correlation of the phases of Biden's dementia and the alignment of parties in Congress, but on the plans and correlation of various forces that really determine the country's policy. And these are, first of all, the American oligarchs, who through various "investment funds" (Vanguard Group, BlackRock, etc.) own the largest corporations that control the economies of the West. And here any analytics enters on the shaky ground of assumptions, because the springs of legal and illegal lobbying are covered with a well-guarded secret. It is not so easy to outline the circle of people who really influence US policy, despite all the Forbes lists, because they are only part of a well-thought-out PR.

However, it does not make much sense to go into personalities in the case of considering global processes, but you can fall into conspiracy theories. It seems that America is ruled by all the same clans noted in Soviet books - Morgans, Rockefellers, Du Ponts, etc. Of course, they are situationally grouped, promoting their group interests and realizing some plans. And successive teams of Republican and Democratic politicians act as a political headquarters that monitors the situation, makes forecasts and implements a certain compromise line of the American state.

If we remain solely on the basis of facts, we can note the following.

First, lobbying by the military-industrial complex plays a dominant role in the United States, since it is the sphere of military production that has the highest capital intensity. It has been repeatedly noted in the literature that sky-high monopoly prices are set in the US military industry, which make every rivet literally golden. Scandals are known when the media leaked information about the cost of purchases by the Pentagon of a type of steel screws for $37 or an ordinary hammer for $435 in 1986. It is clear that people who are so rich in defense orders are constantly pushing America to unleash wars and are actively ordering articles that the Pentagon's military reserves are depleted, and Russia will defeat the American army in five minutes.

Secondly, the line of conduct of the American state is tied to the economic interests of the largest corporations and has, as it were, two components: tactical and strategic. The first is largely economic and is determined by the momentary interests of specific lobbyists. For example, the provocation of the military conflict in Ukraine led to a redistribution of the European gas market and an increase in orders for weapons. The second can be called political, and it covers issues of global politics, the fight against global and regional competitors - the EU, China, Russia, Iran, North Korea and others. Ultimately, the strategy is also based on monetary interests, but they are realized through the creation of favorable conditions for American business as a whole. For example, the collapse of Russia and China will create excellent ground for the redistribution of property in these countries and destroy competition in the world markets for American goods. Or, say, the provocation of a military conflict in Ukraine depletes the military, and hence the political potential of Russia, makes Europe dependent on the United States, etc. All these seemingly purely political moments will eventually be “digitized” into concrete profits for specific American monopolies.

There is also an ideological moment in the area of ​​the strategy of the US political line - the implementation of the struggle for the superiority and non-alternativeness of the Western economic and political model of social order. American bigwigs and politicians are afraid of any "autocratic", "socialist" systems, because all their economic and political successes threaten the internal stability of the US itself and its satellites. The loss of power by the American tycoons will lead to catastrophe for them in the form of loss of property. The loss from the sphere of influence of a country is also painful, as it will lead to the disappearance of cheap resources and markets.

Thirdly, the line of conduct of the American state cannot but reckon with the opinion of the people, because a deceived voter, driven to despair, can suddenly be organized to storm the White House and the Capitol. And no PMCs and National Guards will save America from civil war and collapse, which is tantamount to a complete and final loss of world hegemony. That is why the American authorities and business are pumping the people so hard with propaganda not only through the media and Hollywood, but also through school, university, psychotherapy, PR and fashion for the "American way of life."

Fourthly, the American political headquarters missed the rise of the Chinese economy, the change in the vector of globalization, and over the past 30 years the American bigwigs have played the "information economy" to the deindustrialization of the United States. These mistakes brought to life the decision to curtail globalization and unleash a new cold war against, first of all, the Chinese state, which has accumulated huge capital in its hands and is pursuing a socialist policy threatening by its example (in China every year the people live better, and in America every year worse).

US goals and objectives in Ukraine

Based on the foregoing, it can be assumed that specifically in the Ukrainian conflict, the United States expected to unleash hostilities, fan the fire of the conflict as much as possible and thereby make Europe dependent and weaken Russia. Actually, all these tasks, except for the last one, have been completely fulfilled, in connection with this, the weakening of aggression in rhetoric followed. Therefore, it is wrong to consider the US course as a complete failure. In our country, they often focus on the US desire to defeat, weaken or even collapse the Russian Federation, but it seems that such prospects were initially assessed by the Americans as the least likely, despite all the loud statements about “tearing the Russian economy to shreds.” Still, do not underestimate the enemy.

Another thing is that this US line leads to uncontrollable consequences of reformatting the entire world trade. But here, too, it seems that American business, highly appreciating its economic potential, expects to get out of the situation with fewer losses than Russia and China. It is possible that this is a presumptuous delusion. Time will tell.

The goal of American policy in Europe is to approach China through Russia. Here, obviously, there are no visible successes for the United States, and only the future will show whether the Russian Federation has weakened or strengthened after the end of the civil war in Ukraine. But so far, in this part, those who speak of the failure of the American course are right, because today the role of the Russian Federation in the international arena has increased dramatically, the battle for Donbass is steadily ending on the battlefields, and nothing but half-branded arrest officers and Gordons speaks of a turning point.
Reporterin Yandex News
Reporterin Yandex Zen
12 comments
Information
Dear reader, to leave comments on the publication, you must sign in.