Why Biden's dementia could be the main threat to humanity 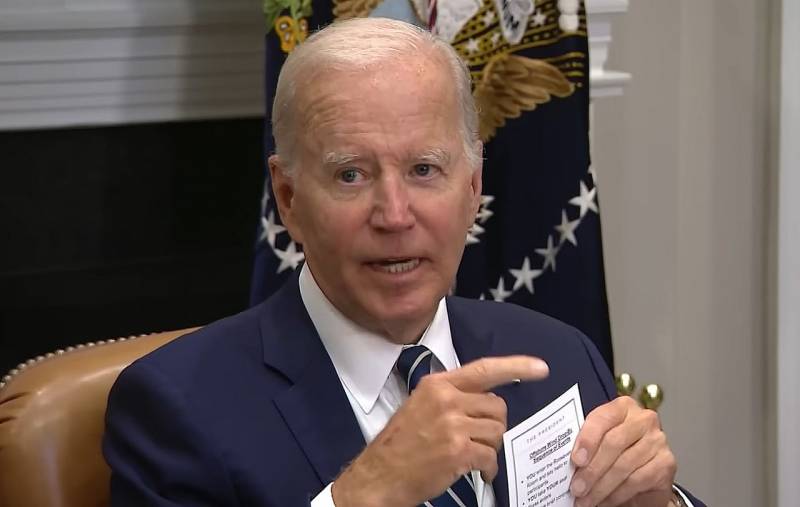 The world is on the brink of a catastrophe that could destroy us all. No frills, that's exactly what it is. And the reason for this is not international terrorism, not tense relations between Russia and NATO, not a collapsing world order, and not even a coronavirus. Biden's progressive dementia is the main threat to humanity.


A few days ago, during a meeting with US wind energy leaders, US President Joe Biden accidentally showed a note prepared for him on camera. This is not the first time this has happened, but the content of the new cheat sheet made even extremely loyal publications alert. It read: "Take YOUR seat", "YOU will give brief comments (2 minutes)" and "YOU are leaving". That is, not just protocol moments, but literally instructions for a person who is clearly suffering from a serious cognitive ailment.

So it turns out that right now the power with the second nuclear arsenal in the world, capable of destroying half the planet, is controlled by a person experiencing serious problems with his head, from whom you can expect anything. Not because he is bad or evil, in a political sense, Biden has always been a completely ordinary Democrat, but because every day he is getting closer to insanity.

In American political jargon, there is a curious term - "lame duck". A lame duck is commonly referred to as an outgoing president. political a figure who formally possesses the highest power, but in reality is already losing weight. The instructions of the outgoing president are often not carried out in full or even cease to be carried out due to the fact that his entourage begins to think more about the future than about the present. And today it is difficult to find a more textbook example of a lame duck than Joe Biden.

However, it was not the term of office that made Biden coming to an end, but health problems. He may simply not sit out until the end of his term, which makes his position even more precarious. However, the "leading" political consultants of the American leader are clearly well aware of what is happening, and are taking retaliatory measures designed to stabilize the situation. And now it turns out that Biden is not only not going to resign for health reasons, but, on the contrary, plans to be re-elected for a second term. Moreover, it is significant that, unlike other Biden semi-delusional statements, according to which his assistants regularly back up, this has not been specifically refuted.

The irresponsibility of the US political elite is, of course, striking. Just like the rest of the cogs in the American state machine. After all, the White House has medical staff, and, undoubtedly, one of the best in the States, there are assistants and advisers, there is the Secret Service, which is engaged in the protection of top officials - and they are all silent in a rag, as if nothing is happening.

Even if the situation becomes obvious even to journalists and voters who sympathize with the Democrats, then do those around Biden really not understand that he is no longer just inadequate, but dangerous not only for himself, but for the whole world? The US is not some banana republic. The mad ruler at the head of the States threatens not only his people, but all global security.

The world already knows the precedents when the nuclear button turned out to be in the hands of a leader who is not fully aware of his actions. Moreover, unfortunately, this happened in our country. However, Boris Yeltsin, with all his addiction to well-known drinks, in moments of sobriety still remained an adequate person. Even if his actions led to the collapse of the country, nevertheless he did it consciously, and not because of mental problems. Moreover, those around him, who were well aware of his habits, usually always understood when he was clearly aware of reality and when he was not. The behavior of a person "under a degree" is usually very easy to discern.

With Biden, everything is much more complicated and much, much more dangerous. Alzheimer's syndrome, of which it shows all the signs, is notorious for the fact that at the initial stage it can be extremely difficult to determine at what moments the patient is adequate and at what moments he is not. And that is exactly what is happening with Biden. On the one hand, he regularly gets confused in words, loses the thread of the conversation, becomes disoriented in space and speaks nonsense. On the other hand, it is impossible to recognize him as “round the clock” insane. He still holds the highest government post, still communicates with world leaders and, at the very least, speaks to journalists. Although the further, the more the boundary between the periods of enlightenment and cloudiness is blurred, and the more difficult it becomes to distinguish between them, which is especially important, given the current geopolitical situation.

Unlike Yeltsin, who sought to improve relations with the United States (albeit to the detriment of national interests), Biden's America proclaims a course of escalation, strangulation of Russia, openly supplying our enemies with weapons and talking about the need to defeat us. Add here the age-old aggressiveness of the American "hawks", eager for a big war, and things take a very serious turn.

After all, Biden can make a fatal mistake, not because it is so beneficial to his country or the situation requires it, but simply because something in his head once again goes wrong and, instead of saying hello to emptiness, he decides to say hello to eternity and press the big red button.

It is clear that Biden is now being kept on the most advanced medications that slow down the process of mental extinction. It is clear that the entire American "big pharma" is now working to prolong the clarity of his mind. Nevertheless, the degradation of personality that accompanies Alzheimer's cannot be completely stopped - only slowed down. And the long stay of the weak-minded as the American leader can lead to absolutely unpredictable consequences. The mad ruler is a suitable character for Shakespeare's tragedy, but not reality. And if he leads the US, it could be a tragedy for all of us.
Reporterin Yandex News
Reporterin Yandex Zen
10 comments
Information
Dear reader, to leave comments on the publication, you must sign in.