Gold embargo: the collapse of commodity exports or a unique chance for Russia? 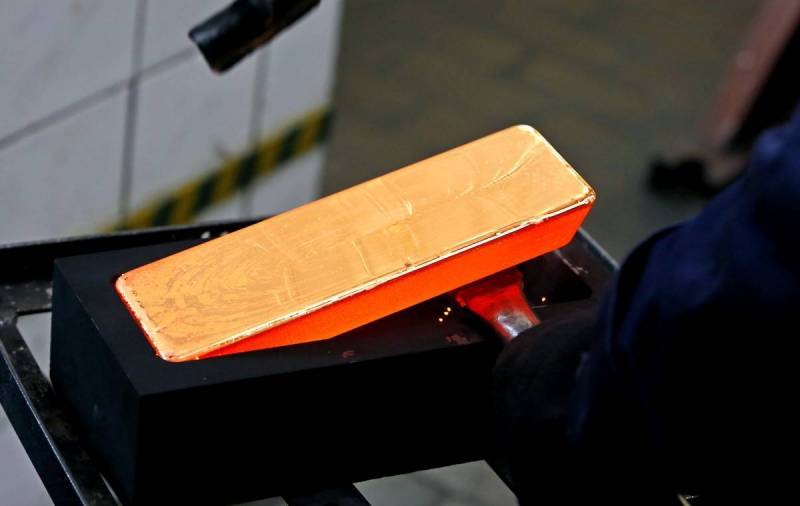 Domestic economy received another sanctions blow from the collective West. The countries of the so-called "Big Seven" decided to ban the import of Russian gold, and now they intend to follow their example in the European Union. What is it for us: another "horror-horror" or, on the contrary, a unique window of opportunity?

The fact that Russian precious metals could fall under sanctions restrictions after oil and gas was clear for a long time. The decision of the London Bullion Markets Association (LBMA) to exclude Russian gold producers from its accredited Good Delivery list can be considered the first sign.

Recall that the UK is considered the world's largest gold trading hub, and domestic refineries have lost the opportunity to sell their products according to international standards in their usual markets, except at a significant discount. For them, this immediately became a very heavy blow, and they actually came out with a demand to oblige the Central Bank of the Russian Federation to buy gold from them without the discount imposed on them. The idea of ​​creating a state “gold piggy bank” in Russia began to be actively discussed in the expert community, which was even supported by the Ministry of Finance of the Russian Federation. As part of the State Fund of the Russian Federation, a mobilization reserve of precious metals and stones may soon appear.

But the enemy does not sleep. United States President Joe Biden tweeted that the GXNUMX countries had agreed to ban Russian gold imports:

The G7 countries will together announce that they will ban the import of Russian gold, the most important export item that brings Russia tens of billions of dollars.
Restrictive measures will apply to both mined and refined gold. It is alleged that this is done in order to hit the income of Russian oligarchs. US Secretary of State Anthony Blinken estimates that up to $19 billion will fall out of total export volumes:

This is Russia's second largest export after energy. Gold exports amount to $19 billion a year, with the bulk of it coming from the G7 countries.
At the same time, the entire European Union is also ready to join the sanctions against domestic precious metals. It is assumed that the economic indicators of our country will drop by 15%.

Is everything as scary as it seems in reality, and what to do now?

On the one hand, the experience of Iran, which has been living under a hood for decades, proves that there are no such sanctions that it is impossible to find a loophole to circumvent. Probably, Switzerland will now become such a “window”. This small European country, not officially a member of the European Union, is home to four of the world's largest gold refineries, which together process two-thirds of the world's gold. One of them, called Argor-Heraeus, made it clear that he was ready to accept gold from Russia for processing if it was documented that these deliveries would not bring financial benefits to a Russian individual or legal entity. And then, as they say, equipment.

Also, let's not forget that gold is not only a precious metal or a store of value, but also a valuable material widely used in industry. For the production of billions of microcircuits in Southeast Asia, a huge amount of technical gold, doré, is constantly required. So it will not be possible to block the sale of the Russian precious metal, gold will pave its own way.

On the other hand, a truly unique situation is emerging today. The collective West itself "cuts out" Russia from the "globalist" system of the world order, literally forcing it to create its own alternative project. And our natural resources allow us to take a real step in this direction.

So, after gas, the export of all, absolutely all Russian resources should be transferred to payment in rubles, carrying out a real “de-dollarization” of the economy, about which domestic “syslibs” could only chatter. Let the world community get used to the sight of our ruble. The artificial restrictions imposed by the collective West on the export of Russian gold make the return of the gold standard almost uncontested. Our ruble, enforced for exported oil, gas, timber, grain, weapons and everything else backed by gold, will allow Russia to become an alternative center of economic integration, however ironic it may sound to some now.

About how quickly the transfer of the ruble to the gold standard by Comrade Stalin helped to raise the economy of the war-torn country, we detail told previously. In 2019, the proposal to use the recipes of the USSR caused a real hysteria among the domestic liberal public. By June 2022, in theory, the brains of many should already have been "corrected", if even Dmitry Medvedev went to war with the collective West.
Reporterin Yandex News
Reporterin Yandex Zen
17 comments
Information
Dear reader, to leave comments on the publication, you must sign in.