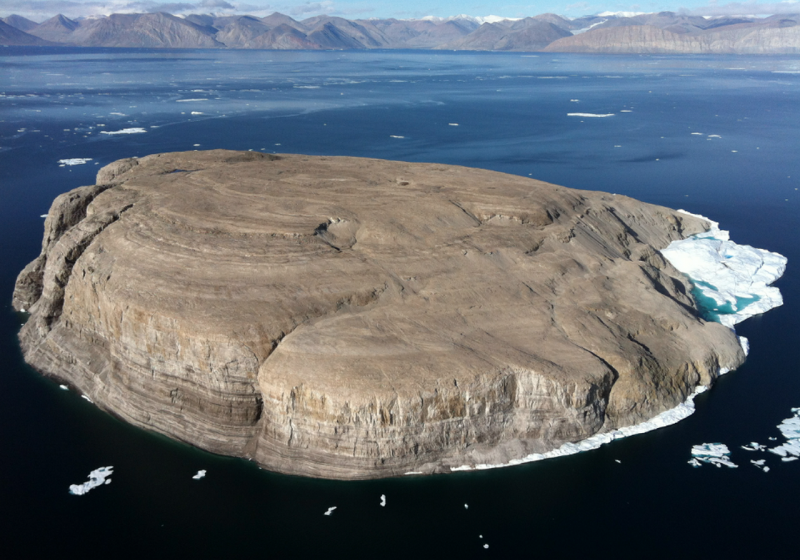 For almost half a century, the most unusual war lasted, which went down in history as the “whiskey war”. Its participants are Canada and Denmark, and the uninhabited island of Hans (area - 1,3 square kilometers) off the northern coast of Greenland became the reason for the disagreement. It was his affiliation that was disputed for 50 years by the parties to the “alcohol confrontation”.

Is the bureaucracy to blame?

The mess with the piece of land (in fact, Hans Island is a huge stone in the middle of icy waters) began with the transfer of Great Britain's Arctic possessions under the jurisdiction of Canada in 1880. But when drawing up all the necessary documents, outdated maps of the XNUMXth century were used, on which the future "island of discord" was not indicated. At that time, no one paid attention to such a trifle.

Active exploration of the Arctic began in the 20th century. By the 1933s of the last century, Danish researchers compiled a detailed map of the region, on which Hans Island was plotted. They attributed the discovery of this territory to themselves. In Copenhagen, which at that time had full control over Greenland for more than a century, they decided to include this uninhabited piece of land in the kingdom. In XNUMX, the island was officially recognized by the Permanent Court of International Justice of the League of Nations as Danish territory.

Until the liquidation of the League of Nations in 1946, it never occurred to anyone to dispute the ownership of the island of Denmark. But with the abolition of this international organization, the recognition of the island as Danish territory actually lost its force.

For several decades, a piece of sushi was not remembered either in Canada or in Denmark. But in the 1970s, countries decided to demarcate water boundaries. The process ended in 1973, but the owner of the island has not yet been determined. Rather, the two Arctic powers at once considered the territory to be theirs. The fact is that Hans Island is located at an equal distance from both Greenland (Denmark) and from the Canadian coast - 18 kilometers. International law did not help either, the norms of which were confirmed - both countries can claim the island.

It was 1973 that became the time for the start of the "whiskey war". True, its active phase came ten years later - in 1983, when Canada issued permission to a local oil company to establish a scientific camp on Hans Island, which studies the effect of sea ice on drilling rigs.

This was learned by a Greenlandic journalist who accidentally met Canadian scientists while visiting the island. After some time, the Hainang newspaper published an article describing activities in the disputed territory. The publication did not go unnoticed by both the Danish and Canadian authorities.

Picnic on the coast

In 1984, the Canadian military landed on Hans Island. They set up a flagpole with a red maple leaf flag, and left a bottle of Canadian whiskey and a note that read "Welcome to Canada". But the peculiar “dominance” of the Canadians on a piece of land did not last long. A few weeks after the Canadian landing, Danish Minister for Greenland Affairs Tom Hoyem arrived on the island. He decided to repay the "impudent occupiers" with the same coin. The Canadian flag was replaced with a Danish one, the bottle of whiskey was replaced with a bottle of schnapps, and a new note read: "Welcome to the Danish island."

Actually, the war consisted in replacing the flags, planting bottles with national alcoholic beverages and notes of the appropriate content. However, over time, civil servants of the highest rank were involved in the conflict. Once on Hans Island, even the Minister of Defense of Canada, William Graham, visited. The Danes, in turn, twice sent their frigates with soldiers to the land area.

Until 2005, the exchange of flags, bottles and notes apparently suited the parties. After 32 years, Canadian authorities have said they want to start negotiations on the future of Hans Island. The initiative was supported by Danish Prime Minister Anders Fogh Rasmussen. The government of Greenland (an autonomous part of the Danish kingdom) also reacted positively to the readiness of the two sides to resolve the long-term "alcohol" conflict. The Greenlandic authorities have offered to appeal to the International Court of Justice in The Hague if an agreement cannot be reached.

At a meeting in New York, the Danish and Canadian foreign ministers decided to work together "to put this issue behind us." But each of the parties still continued to insist that Hans Island belongs only to them. The situation remained unresolved.

In 2007, Canadian authorities, based on new satellite photographs, admitted that the island is indeed not completely within the Canadian maritime territory. The border runs roughly in the middle of the land. Negotiations continued and stretched out for a long 11 years. In 2018, a working group was created to resolve the conflict. A comprehensive study of the problem made it possible only by 2022 to come to the signing of a peace agreement.

Melanie Joly and Jeppe Kofod, the foreign ministers of Canada and Denmark respectively, and the Prime Minister of Greenland, Mute Egede, met in Ottawa on 14 June. The participants signed a document according to which the border between Canada and Denmark will pass through a crevice in the center of the island. Thus, 60% of the island was received by the European kingdom, and the remaining 40% - by the North American state. After signing the agreement, the meeting participants exchanged bottles of alcohol.

We have ended this dispute, which many called the "Whiskey War". I think it was the friendliest of all wars. This is a victory for Canada, for Denmark, for Greenland and for the indigenous peoples of the north.
Jolie noted.

Her colleagues also stressed that the “whiskey war” ended against the backdrop of a Russian military special operation in Ukraine. Like, it's time for other countries to follow the example of Denmark and Canada, and sit down at the negotiating table.
Reporterin Yandex News
Reporterin Yandex Zen
Information
Dear reader, to leave comments on the publication, you must sign in.