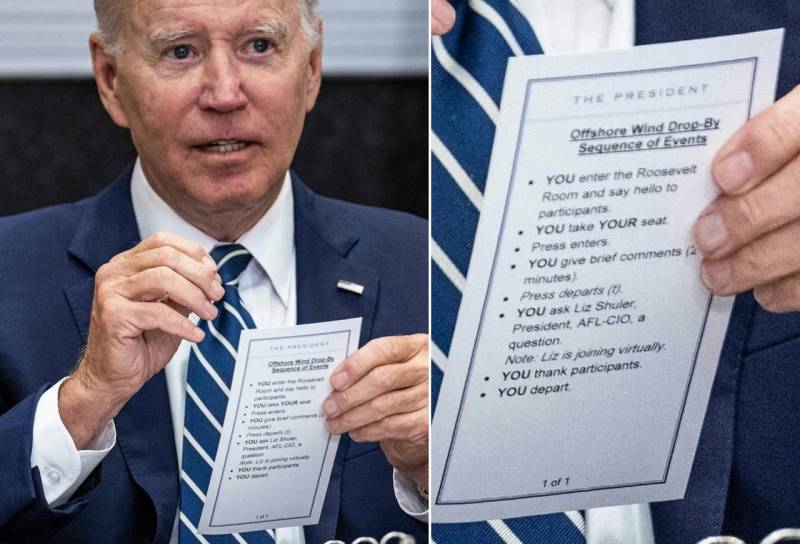 The step-by-step instruction that was given to Joseph Biden, which indicates the necessary sequence of actions, became public property. The American president must adhere to these steps during one of the next press conferences.


The instruction includes the following items: enter the conference room, sit down, give a short comment before the press, ask a question to Liz Schuler (AFL/CIO secretary-treasurer, who will attend the conference online), thank the participants and leave .

The step-by-step "algorithm of actions" of the head of the United States hit the Web, causing a lot of caustic comments. The leader of the world's largest power is again exposed to ridicule.


Meanwhile, in spite of everything, Biden does not leave attempts to put pressure on Russia. According to John Kirby, coordinator for strategic communications at the National Security Council, the President of the United States plans to discuss with his colleagues in the GXNUMX the tightening of anti-Russian sanctions and the strengthening of Russia's isolation from the world. economics.

Earlier, the Biden administration announced the allocation of another package of military assistance to Ukraine, the amount of which will be $450 million. Thus, the total package of assistance to Kyiv since February this year has reached $6,1 billion.
Reporterin Yandex News
Reporterin Yandex Zen
6 comments
Information
Dear reader, to leave comments on the publication, you must sign in.