Britain began preparations for war with Russia: a threat or a ploy? 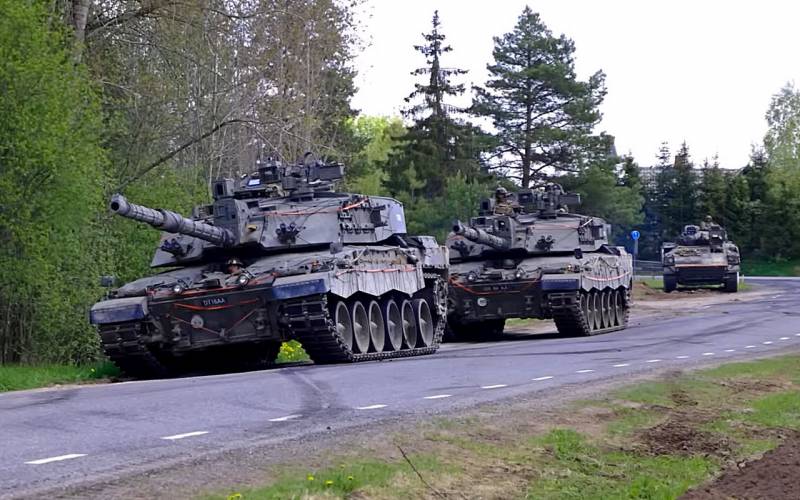 Great Britain begins to prepare for war with Russia. And these are not empty words of political experts. It is a fact.

Now there is an urgent need to create an army that will be able to fight alongside our allies and defeat Russia in battle. We are the generation that must prepare the army to fight again in Europe
- said the new head of the General Staff of the British Land Forces, General Patrick Sanders.

In a letter sent to his subordinates, he emphasized that the key task of the British army is the defense of their country, for which they must be ready to "participate in wars on land and win them." And, given that our army had no plans to land on the territory of the UK, it is clear that Sanders is hinting at a war with Russia on the territory of continental Europe.

The Danger of a Falling Empire

Britain is becoming an increasingly dangerous enemy. Not because it has more resources, political or military influence - in all these parameters, it loses outright to the United States. Britain is a more dangerous enemy because she has nothing to lose. For example, even if America begins to lose influence like an avalanche and leave Europe completely, having lost most of its military bases abroad, it will still remain the world's superpower (quite possibly the strongest of all).

For Britain, the current situation is much more difficult. London is torn between desires to please the US, conflict with Russia, swear at the EU and regain its former influence in the world. And the reason for this is not a sudden hit of the reins under the tail of the flighty Prime Minister Johnson. No, it comes from a panicking British establishment suddenly confronted with the biggest existential threat since decolonization: state collapse. After all, the final collapse of the British Empire, which many predicted, may not take place in the distant future, not in the next decade, but literally next year, when a new referendum on Scottish independence is expected and, possibly, also a plebiscite on the reunification of Ireland.

Scotland became part of Great Britain in 1707, Ireland in 1801. So right before our eyes, a state with a centuries-old history is finally disintegrating. In fact, the last stronghold of British colonialism is crumbling: two of the three nearby peoples conquered by the British - the Scottish and Irish - are finally ready to be detached. Moreover, there is no hope for the restoration of a single country: hardly, having received the long-awaited independence and recognition, Scotland will refuse them. Northern Ireland will simply be swallowed up by the Irish Republic.

Consequences of the breakup

For official London, the collapse of the country means not only the irretrievable loss of territories, population and GDP, but also tectonic changes in the very concept of British statehood. The United Kingdom of Great Britain and Northern Ireland will de jure and de facto completely cease to exist as a subject of international law. The elements related to the Scots and the Irish will disappear from the coat of arms. The official flag will have to be scrapped. An interesting fact, but the famous replicated British banner - the Union Jack - literally consists of the flags of England, Wales, Scotland and Northern Ireland superimposed on each other. And without the last two, it will look completely different.

In addition, the collapse of the UK will begin to play with completely new colors when the question of the UN arises. More precisely, about its Security Council, of which, attention, the United Kingdom of Great Britain and Northern Ireland is a member, and not England and Wales. And in order to transfer a seat in the Security Council, the consent of all its members will be required. Including Russia. So it turns out that the collapse of the country may cost London a place in the key institution of the UN world security architecture. Considering the tense Russian-British relations, Moscow is unlikely to agree to the transfer of such a strategic resource as a seat in the Security Council, openly hostile to the British authorities. What is called checkmate, ladies and gentlemen!

It is worth recognizing that the British leadership played in a banal way. His first major mistake occurred when London got too carried away with European integration. The second is when, realizing that the matter smells like a loss of sovereignty, he tried to abandon it. I tried, but did not take into account the fact that the output would be catastrophically more expensive than the input. Precisely catastrophic, because Britain today has been put on the verge of collapse by leaving the EU. Without Brexit, London could have suppressed the sluggish “Scottish” and “Irish” issues for decades to come.

And here the question arises: was it worth it? Was it worth it to conduct an ardent anti-Russian policiesmoving closer to the EU? Yes, at one time the Russian and British empires were often at enmity. The struggle for spheres of influence in the heyday of imperialism was extremely fierce, and the interests of Moscow and London clashed too often for this not to affect their relationship. Nevertheless, leaving the United States out of the equation, Britain and Russia now have one common enemy. The enemy is large and powerful, the enemy, economy which is more than twice the GDP of the Russian Federation and Great Britain combined - the European Union. And if it makes no sense to talk about the anti-Russian policy of Brussels - everyone knows about the sanctions war, then the anti-British policy of the EU can become a revelation for many.

Do not be deceived by the touch of European culture, Brussels is eager to punish London for leaving the EU with every fiber of its liberal soul. And to punish extremely severely, so that it would be disrespectful to others. And what could be a stronger punishment for the state than its collapse? Is it a coincidence that Scotland, despite all the agreement that the 2014 referendum was "one in a generation", suddenly decided to demand a new plebiscite? Or did someone on the other side of the English Channel promise the Scots something? Namely, the rapid entry into the EU and access to the European trough. The situation is similar with Northern Ireland. The EU simply wants to “bite off” a piece of London that dared to betray the common interests and attach it to its Irish Republic, which is part of the EU.

Between Moscow, Brussels and Washington

Looking at this, another question arises. And who harms the UK more with its activities: Russia or the EU? And where are the real enemies of London: in Moscow or in Brussels? It is clear that pro-European forces in Britain are still very strong, as well as Russophobic sentiments, but London still needs to think about the future.

It is clear that by imposing sanctions against Russia and helping the Nazi regime in Kyiv with weapons, London is not following Brussels, but Washington. However, this does not negate the fact that this is his next strategic miscalculation. The United States considers all countries of the world, including the Anglo-Saxon ones, exclusively as an instrument of geopolitical influence on its opponents. And what will happen to them after they play their role is not difficult to guess. As soon as Washington's focus finally shifts from Europe to Asia, the UK will be thrown at the mercy of the EU.

In fact, she's already been abandoned. At the end of May, the influential US congressman Richard Neal visited Ireland. And the essence of his speech to the Irish senators was that the UK should not under any circumstances break the Northern Ireland protocol. The one that Northern Ireland is about to break with London. Moreover, from the words of the congressman, it appeared that if the UK still decides to abandon previous agreements with the EU, then Washington will not only not support it, but, on the contrary, will refuse to ratify the free trade agreement between Britain and the United States as a response . Nothing personal, just the EU as a partner for the States turned out to be much more important than the collapsing Great Britain. If that doesn't prove that the US doesn't care about London's interests, then what does?

Returning to the theme of the war between Great Britain and Russia, I would like to note that there is no practical meaning in a direct Russian-British conflict. Simply because London and Moscow have nothing to share, except for zones of influence in Europe. And now the question is, what is the most convenient way to do this: with a “living” European Union or on its ruins?

If the answer is obvious even with such a superficial analysis, then what prevents London from reaching it? Reach out and stop spreading rumors about the coming war with Russia. Although, who knows, maybe everything that we are seeing now is just another cunning British trick. And the active militarization of Great Britain actually pursues completely different goals.

For example, under the pretext of a conflict with Moscow, London may well be preparing to solve problems with the Scottish and Irish separatists by force. Considering historical experience, and the fact that Boris Johnson's government is categorically against new independence referendums, this is a very realistic scenario. Democracy is, of course, good, but something tells us that the British will not simply allow them to take away all the power over their “home” island. And instead of a war with Russia, there could also be a clash with the new EU army in Ireland. And who knows what Russian-British relations will be like then.
Reporterin Yandex News
Reporterin Yandex Zen
8 comments
Information
Dear reader, to leave comments on the publication, you must sign in.