Korea or Chechnya? The West is determined with the future for Ukraine 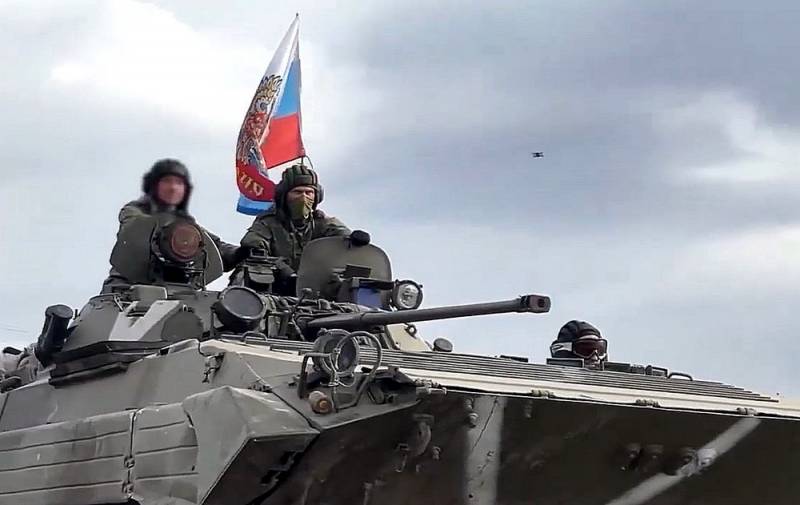 The euphoria that had gripped the Western “allies” of the Kyiv regime after the days when the Russian army allegedly “suffered a defeat near Kyiv and Chernigov” and its units were withdrawn from these regions is declining more and more. No, Washington, London and Brussels have not abandoned the idea of ​​a militarytechnical support to Ukraine for the maximum extension of the ongoing hostilities on its territory. They simply began to look at things much more realistically, making sure that all assumptions about the possibility of “victory over Russia on the battlefield” were nothing more than a whim inspired by Moscow’s misunderstood tactical maneuvers.


Again, the situation with anti-Russian sanctions in the “collective West” is not at all the way it was originally intended. Yes, the process of abandoning “enemy” energy resources is underway, but this is happening with a fair amount of “creaking” and not at all at the pace that could lead to really painful results for Moscow. Winter is ahead, and it may well turn into a disaster - for Europe at least. It is on the basis of all these moments that everything is louder in the West (not yet from the lips of high-ranking politicians, but already at the level of the “top” media, which are the spokesmen for such opinions), forecasts that are not at all optimistic for the “nezalezhnaya” begin to sound. The "allies" are slowly considering how to end the Ukrainian crisis they have caused, and are weighing the options. I must say, the most diverse.

In order not to cite the entire spectrum of opinions and forecasts of Western experts that are not particularly different in fundamental issues, we will try to reduce them in the most general form to two main ones. The first option, in this case, is seen as quite advantageous both for Kyiv and for its "curators" and "partners". Indeed, as a result of its implementation, the state of Ukraine will not only remain on the political map of the world, it will be controlled by the West even to a greater extent than before, starting from 2014. Let's call this scenario "Korean" - based on a publication that appeared in the authoritative American edition of The Washington Post at the beginning of this month. Involved by the newspaper as an expert on international relations, David Ignatius, in the column allocated to him by the author, states without any hesitation that the option of actually dividing into two opposing states, but not conducting open hostilities among themselves, is quite acceptable and acceptable for the “independent” one.

Referring to the objective factors already mentioned above – the successful offensive of the Liberation Forces in the Donbass, the steadily growing fatigue of European countries from what is happening and their concern about the inevitable costs of a protracted conflict, Ignatius concludes that the final decision on the fate of Ukraine should be made by the United States. And they will have to do this by going to some kind of “compromise option” exactly along the lines of the division of Korea into North and South in 1953. As the expert honestly admits, “the United States was unable to achieve its goals in this country by military means,” and therefore they had to agree first to a ceasefire, and then to the emergence of two antagonist states on the Korean Peninsula.

At the same time, the author of the publication is trying to assert that the actions of Washington, which “looked like a defeat in 1953,” ultimately justified themselves in full. He is confident that the emergence of a communist North Korea, which to this day is a serious problem for the United States and a constant source of "headache", is fully compensated by the success of South Korea, which, in his words, is "one of the world's economic pearls”, which is one of the “showcases” of the “Western world” and traditionally remains a reliable military and political ally of the Americans. So why not do the same with Ukraine? The opinion of Mr. Ignatius is quite peculiar and tendentious. Firstly, for some reason he stubbornly continues to reduce the entire world geopolitics solely to the implementation of the decisions taken in the White House. Secondly, he, obviously desperately cunning and sinning against the truth, is trying to present the matter as if the intentions of the "collective West" include the restoration of the "non-deposit" and the creation of some kind of "economic miracle" there. Yes, it is not surprising after that that such crazy dreams are voiced over and over again by Zelensky ...

In fact, it is clear that in the event of a conditional “division” of Ukraine, that part of it that remains under the rule of the Kyiv regime (it does not matter at all whether the current one or the one that the “partners” deign to establish there) will in no way be engaged in the development of industry, infrastructure and "technological breakthroughs", and preparations for a new war with Russia under the slogan of "de-occupation of the occupied territories" - even more cruel and total. In no other capacity, except for anti-Russia, moreover, militant and aggressive, the West simply does not need the “non-alienated” one, which was fully proved by all its actions since the beginning of the NWO. It is clear that for Moscow (whose opinion Ignatius, of course, is not going to ask, but these are his problems) such an option is unacceptable in principle. And there will be no other under the “Korean scenario” - this is clear to any sane person.

Tellingly, about the same version as The Washington Post was discussed a little earlier (at the end of May) by another American publication of the first magnitude - The New York Times. His editorial, albeit filled with malice and bile against Russia and personally Vladimir Putin, admitted the obvious fact that sooner or later Kyiv “will have to make painful territorial decisions that any compromise will require.” That is, to recognize the loss of at least those territories that have already been liberated from his power. “Facing such a reality can be painful, but it is not peace. This is what governments have an obligation to do, and not chase after an illusory victory,” the NYT concluded, while urging its own president “to make it clear to Zelensky that there is a limit to how long the United States and NATO will stand against Russia, as well as limits weapons, money and political support they can muster." At the same time, one should by no means think that American sharks are worried about the size of the losses that Ukraine will suffer by continuing to provide senseless and, in fact, futile resistance - human, material, or, again, territorial.

In the West, there is only one thing they really fear - that the reckless actions of the Kyiv regime will lead to its complete and final military defeat. That is, the development of the situation according to the “Chechen scenario”. The Atlantic wrote about the possibility of implementing this just the other day. The author of the publication, involuntarily paying tribute to "the Russian military machine, which, having overwhelming superiority ... is slowly but surely moving forward ... at the cost of huge losses for the defenders," claims that "Putin is preparing Ukraine for the fate of a new Chechnya."

Some of the parallels he draws in his article are clearly far-fetched, if not far-fetched. For example, he proclaims Mariupol "Ukrainian Grozny", apparently based solely on the scale of destruction. And the comparison of Melitopol and Kherson with “the pacification of the remote regions of Chechnya, into which Russian troops entered at the end of 1999 without encountering serious resistance,” is also rather doubtful. The essence of the article, however, is different. The Atlantic is trying to convince its readers that the Kremlin allegedly has a "sinister plan that has several phases." The first is "appeasement and intimidation." The second is “the establishment of a regime loyal to Moscow” on the Chechen model again (meaning Akhmat, and then Ramzan Kadyrov). The third, according to the author of the publication, is the most terrible, since during it "the establishment of a new order and the formation of an apparatus of complete domination in the occupied territories" will be carried out. Well, then everything will be completely terrifying:

Traumatized citizens will be taught a new version of their own history, in which their takeover by the Russians was entirely voluntary and, in fact, an escape from "radicals" and "terrorists"
.
What to fake - this is how the United States interprets the denazification promised at the beginning of the NWO to Ukraine ... Do you know what they are really afraid of the most? The fact that "the insidious Russians will eventually be able to" convert the conquered people into their "faith", making them "Putin's infantrymen" who are ready to fight for Russia anywhere." Well, what can I say? A sound thought (if we put aside its absolutely delusional components) and well-founded fears.

At the end of the publication in The Atlantic sound ominous "warnings" and "prophecies". The author insists that Russia "to achieve the desired result" will be ready to "wait years, if necessary", again citing as an example a certain time period that ran between the first and second Chechen wars.

If the West abandons a devastated Ukraine to the same fate as Chechnya, an imperfect ceasefire leading to a failed state victim of a redirected Russian offensive, the scenario will be the same
he draws his final conclusion.

As you can see, the West is sure of several things at once. First of all, that no “complete restoration of the territorial integrity of Ukraine” (especially with the return of Donbass and Crimea to it) is impossible in principle. Compromise, accompanied by serious concessions and losses for Kyiv, is only a matter of time. On the other hand, to this day there are doubts about Russia's ability "in one step" to bring the special military operation to denazify Ukraine to a final and victorious conclusion. That is, until the liberation of all territories controlled today by the Ukronazi regime. It is on the basis of these two prerequisites that they are building further plans today. It is necessary to understand that all of them, in fact, are plans for revenge, projects for drawing Russia into a new, much more bloody and destructive military confrontation with the same even more nazified and militarized by the West Ukraine. So far, our “sworn friends” are not even considering any other options.
Reporterin Yandex News
Reporterin Yandex Zen
6 comments
Information
Dear reader, to leave comments on the publication, you must sign in.