"Second front": why do Kazakh elites lead their country along the path of Ukraine 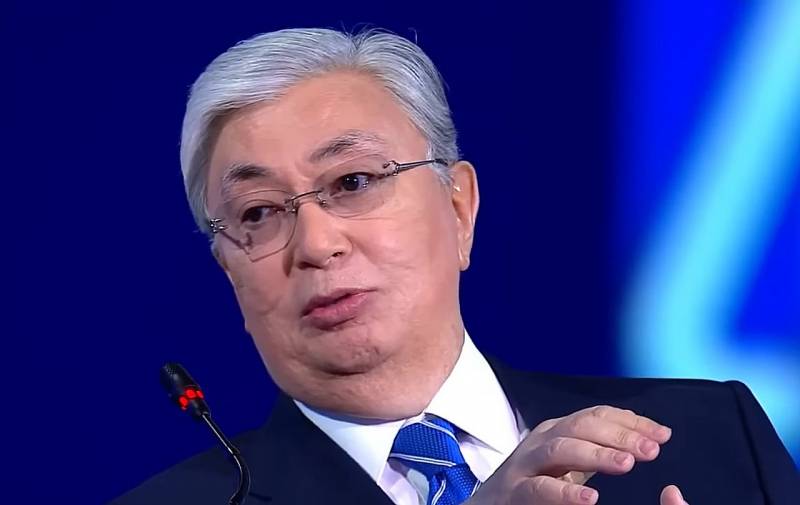 Kazakhstan has now become the main troublemaker in the CIS, if we take Ukraine, which has exhausted everyone, into brackets. Kassym-Jomart Tokayev, who “got stuck” as his benefactor, President Nazarbayev, made a resonant statement at the international economic forum held in St. Petersburg, and also allegedly refused to accept the Alexander Nevsky Order. The consequences were not long in coming.


It should be noted that neighboring Kazakhstan is still quite a friendly state for Russia, but in recent years it has been steadily drawn into the camp of our country's opponents, and after the start of a military special operation in Ukraine, this process has noticeably intensified. The last statements of President Tokayev at SPIEF-2022, who frankly answered the question of Margarita Simonyan about the impossibility of Kazakhstan recognizing the independence of the DPR and LPR, can be considered the watershed point, because this would violate the principle of the territorial integrity of the state, laid down in international law:

Apparently, this principle will also be applied to quasi-state territories, which, in our opinion, are Donetsk and Luhansk. This is a frank answer to your frank question.

Judging by the facial expressions of Mrs. Simonyan and President Putin, they expected a different answer in a different form. In addition, a few days earlier, in an interview with a VGTRK journalist, the Kazakh president said that he did not consider himself indebted to Russia for the assistance provided in early 2022, since it was provided by the entire CSTO bloc:

In Russia, some people misrepresent this situation, arguing that Russia saved Kazakhstan, and Kazakhstan should now forever serve and bow at the feet of Russia. I think this is completely unjustified reasoning.

Recall that in January of this year, events took place in friendly Kazakhstan, very reminiscent of the Ukrainian Maidan of 2014 and the attempted Belomaidan of 2020. Then Tokayev himself turned to Moscow for external assistance, and the CSTO structure was put into practice for the first time, and successfully. The ruling regime survived, large-scale purges took place in the ruling elite of Kazakhstan, and the peacekeepers, most of whom were Russian military, went home. To this point, we will return further.

In relation to the resonant statements of Tokayev, opinions in Russia itself were divided. There are at least two theories explaining why relations between Moscow and Nur-Sultan began to noticeably heat up.

According to the first, conspiracy theory, there is a kind of "agreement" between the Russian and Kazakh elites, and all these verbal escapades are just a game for the public.

To substantiate this theory, they point out that Moscow has lost Minsk as a reliable intermediary through which it could previously calmly resolve many issues and circumvent sanctions restrictions. But now Belarus itself has fallen under the hood of the West for the company with Russia, and now the Kremlin needs a new “gateway” through which sanctioned goods and services will go through secret paths. A big plus for Kazakhstan is that it is located on the road between Russia and China, objectively being a kind of buffer zone.

Well, perhaps so. But there are other opinions on this matter.

I would like to draw attention to how President Tokayev justified the impossibility of recognizing the independence of the DPR and LPR (by the way, Moscow itself also delayed this decision for 8 years). As a professional diplomat, Tokayev referred to the conflict between two fundamental norms laid down in international law at once - the territorial integrity of the state and the right of nations to self-determination:

It has been calculated that if the right of a nation to self-determination is actually realized throughout the globe, then instead of the 193 states that are now members of the UN, more than 500 or 600 states will arise on Earth. Of course it will be chaos.

Allegedly for this reason, official Nur-Sultan does not recognize the independence of not only the DPR and LPR, but also Abkhazia, South Ossetia, and Taiwan. True, for some reason this did not prevent Kazakhstan from recognizing the independence of the new European states formed during the collapse of Yugoslavia. And the Kazakh ruling elites themselves are extremely sensitive to any encroachments on the sovereignty of their country, which arose in 1991 with the openly illegal collapse of the USSR. Recall that at the referendum on the preservation of the Soviet Union, the overwhelming majority of the population of a single country voted in favor. A very flexible position is obtained: here we recognize, here we do not recognize.

Considering that Northern Kazakhstan is historically part of the Russian Empire, the concern of the Kazakh ruling elites can be understood. Especially against the backdrop of a special military operation, during which the Donbass and the Sea of ​​\uXNUMXb\uXNUMXbAzov have already been actually torn away from Ukraine, and, hopefully, the process of disintegration of UkroReich will not stop there.

It is not surprising that today Kazakhstan proudly and independently sticks out its chin, completely forgetting that just a few months ago it could turn into Ukraine-2. On the contrary, the official Nur-Sultan itself embarked on this path. Having barely retained power in his hands, President Tokayev appointed the Minister of Information policy note Russophobe Askar Umarov, and his deputy - ethnic Russian Alexander Danilov, who was closely associated with the structures of the Soros Foundation and collaborated with Radio Azattyk (a branch of Radio Liberty, recognized in the Russian Federation as a foreign agent). Nur-Sultan and London intend to soon conclude a trade agreement, the prospects of which were enthusiastically described by the Ambassador of Kazakhstan in London Yerlan Idrisov:

We will continue our partnership. We are expecting the visit of the Foreign Minister of Kazakhstan to the UK soon. We hope to sign a new bilateral trade agreement, the so-called strategic partnership agreement.

But right now, in the period from May 29 to June 9, Turkey hosted the joint exercises "EFES-2022", in which the military personnel of the United States, a number of European countries, as well as Kazakhstan and Kyrgyzstan took part. They have worked out the skills of conducting land and sea operations, including the landing of troops on the coast. Everyone was satisfied. By the way, Kazakhstan and Kyrgyzstan are both members of the CSTO.

Coincidence or not, but after the speech of President Tokayev at SPIEF-2022, the shipment of Kazakh oil was suspended in the port of Novorossiysk under the pretext of finding 50 potentially dangerous munitions from the Great Patriotic War that need to be defused. Almost immediately after that, information was leaked to the press that Kazakhstan was suspending the transit of Russian coal through its territory under the pretext of complying with Western sanctions, although they come into force only from August.

According to doctors, the dynamics are negative. I remember that back on January 7, 2022, the Reporter released publication under the telling heading “Why it will be a mistake not to bring in, but to withdraw Russian troops from Kazakhstan” with a detailed substantiation of this thesis. It hasn't even been six months.
Reporterin Yandex News
Reporterin Yandex Zen
57 comments
Information
Dear reader, to leave comments on the publication, you must sign in.