Against the "Armata": promising Western tanks at Eurosatory-2022 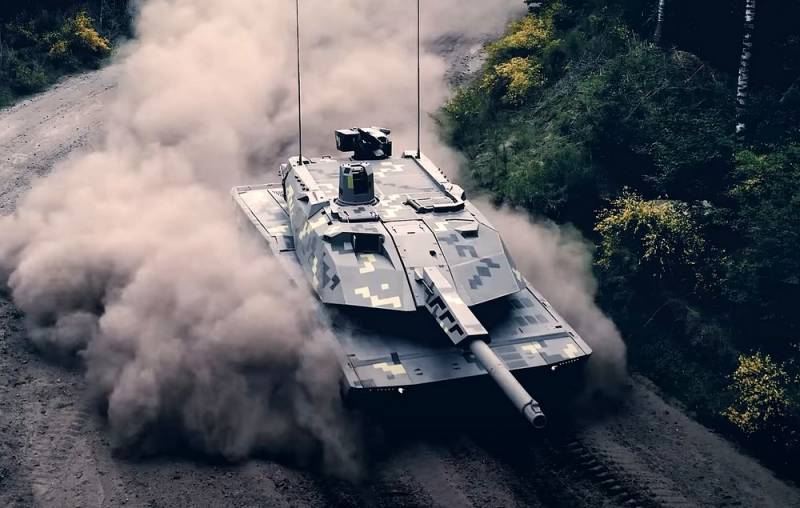 The annual pan-European arms exhibition was held in Paris on June 13-17. This season, the Russian army provided serious “sponsor support”, which continues to process a variety of foreign weapons, including Western ones, into scrap metal on the fields of Ukraine. Thanks to her, the Western military managed to knock out politicians additional budgets for the replenishment and renewal of arsenals, and the industry was finally able to boast of the latest developments.


The appearance of new tanks on the scene in recent decades is an infrequent event. The victory of the West and the collapse of the socialist camp left the world with a seemingly "endless" supply of heavy armored vehicles. Not so long ago, Western military departments seriously planned to remain with armored forces available almost until the middle of the century, directing efforts and finances to other areas. This is one of the reasons why the first demonstration in 2015 of the Russian T-14 Armata created such a sensation.

Now, the Ukrainian conflict has shown two more things: that "lost value" tanks are still the most powerful units on the battlefield and that if the Russians are angered for a long time, then eventually patience will run out, and they will arrive on many hundreds of these units, as everyone was afraid.

In this regard, the initiative projects of the “killers of the “Armata” of the European military concerns, which they took up after 2015, have turned from dubious (from a commercial perspective) investments into topical issues.

In total, two promising samples were presented at the exhibition in metal at once: the joint Eurotank (E-MBT) of the French company Nexter and the German Kraus-Maffei-Wegmann and the purely German Panther from Rheinmetall (pictured) . Both machines were created, although not within the framework of the same technical assignment, but in the spirit of the same trends, therefore, differing significantly technically, they came out very close in terms of the declared combat characteristics.

The concepts of both machines, in turn, were derived from the ideology of the "digitized battlefield", extremely saturated with electronic intelligence, surveillance and communications. And if the already existing tanks that remained after the Cold War were adjusted to this framework in the least possible way by installing digital radio stations, navigators, etc. devices, the "Eurotank" and "Panther" even received a new layout for this.

Both tanks received automatic loaders of the main caliber, but their crews consist of four people - this fourth, instead of throwing shells into the cannon, will now be the "system administrator", responsible for connecting to the tactical network and the tank's own reconnaissance capabilities. The latter will be very large: in addition to observation cameras and thermal imagers, it is planned to equip both machines with standard reconnaissance drones; on the tower of the "Panther" there are even special two "nests" for them.

If you go down from the information ether to the material level of being, the role of tanks remains approximately the same as in the current Western military practice: to be the core of a small (platoon, company) tactical group and fight, first of all, against the enemy equipment and protected firing points from the greatest possible distance. But if until recently it was assumed that such a scenario would be played out in the vein of “white gentlemen against the Papuans and their junk”, now preparations for the fight against a technologically equal enemy are visible.

As the main caliber, a 120-mm cannon of increased power is installed on the Eurotank - mainly because such weapons are already well developed and are still quite sufficient to deal with any targets. However, separately "Nexter" demonstrated at the exhibition a new 140-mm cannon, which "Evrotank" may be armed with in the future.

The Panther immediately comes with a new 130mm cannon that is said to be one and a half times more effective than the current standard 120mm guns. In addition, half of the tower is occupied by a launcher for four Hiro-120 kamikaze drones (Hero 120) with a flight range of 60 km.

To protect against enemy drones, as well as to combat light armored vehicles and firing points on the upper floors, an additional 30-mm gun is provided in a remote-controlled turret: this is already installed on the Eurotank, not on the Panther, but Rheinmetall announced the presence a similar combat module of our own design.

It is curious that, as an auxiliary weapon on both tanks, not an ordinary, but a heavy machine gun of 12,7 mm caliber is paired with a cannon. This was already done in the 1960s: then there were no accurate laser rangefinders, and the machine gun served to zero in the main gun and save shells. Now, the large-caliber ones will have a different task: to defeat infantry in modern armor protection from a long distance. For this, there will also be the latest fragmentation shells, with programmable fuses (exploding in the air above the head of enemy soldiers) and cumulative precharges (to break through concrete walls and let the main charge work already inside the room), but the basis of the gun ammunition will still be sub-caliber armor-piercing " arrows".

Own protection systems for new tanks regularly include the Trophy KAZ, designed to shoot down enemy ATGMs on approach. The armor of promising vehicles, judging by the declared mass (61,5 tons for the Eurotank and 59 tons for the Panther), approximately corresponds to that of the current standard models, but the survival rate of the crew may be somewhat higher due to the improved layout, isolation of people from ammunition and the use of armored capsules.

A new "menagerie" for new blitzkriegs?

In general, the Eurotank is more conservative in design and looks more like a purely prototype technology demonstrator, while the Panther is both more innovative and almost seems to be a pre-production product.

Although it is still unclear how some technical solutions will manifest themselves in reality (anti-drone guns, kamikaze drone launchers, etc.), both of these vehicles are certainly serious competitors to our T-14 in the armored arms race. However, there are still 5-10 years before they are put into production, depending on the interest of potential customers, the pace of refinement of the machines themselves and the preparation of production facilities for them.

The last question is especially interesting: it is still completely unclear what prospects await the European industry against the backdrop of European sanctions against Russia and, in general, the growing global economic crisis. Both technological (for example, an even worsened shortage of electronic components or energy) and market factors can play against new tanks - if governments run out of money, then no one will buy expensive military equipment.

In this regard, so far we are talking about the struggle of the Eurotank and Panther for a place in the sun, not against the Armata, but rather among themselves; and it seems that the brainchild of "Rheinmetall" has more chances than the fruit of love "Nexter" and KMV. Although the latter two firms are the main military contractors of their governments, Rheinmetall is more popular in the world: Eastern Europe, Australia and even the USA lined up behind its infantry fighting vehicles based on the Lynx platform, and there is a good chance that “Panther” will get something from the success of the younger sister. Actually, for those who cannot afford the Panther, the company has created a technologically and even visually similar "light tank" "Lynx-120" with a 120-mm gun.

If we theorize about the military conflict in Europe in the coming years, then tanks of the previous generation will still be opposed in it, although updated ones: our T-90M Proryv, American Abrams (the presentation of a new modernization package for it is scheduled for 10 October of this year), the German Leopard-2A7, the French Leclerc-XLR, and their older versions.

So far, foreign vehicles (fortunately) have not been able to get on the battlefield against the "Russian orcs". In particular, the Spanish government recently announced its readiness to transfer to Ukraine up to 40 Leopard-2A4 tanks from the reserve, but the matter arose as soon as it began: the vehicles that had stood idle for ten years require major repairs, but the Spanish military industry has already received a bunch of orders from respectable European partners, and she does not care about the troubles of the Kyiv fascists.

As for the first battle of "Armata" against Western newcomers, if it takes place, it will take place on the world arms market. And this is another argument for our leadership in favor of the accelerated modernization of the domestic industry, and not only the military.
Reporterin Yandex News
Reporterin Yandex Zen
9 comments
Information
Dear reader, to leave comments on the publication, you must sign in.