The blockade of Kaliningrad has been launched: what awaits Lithuania now 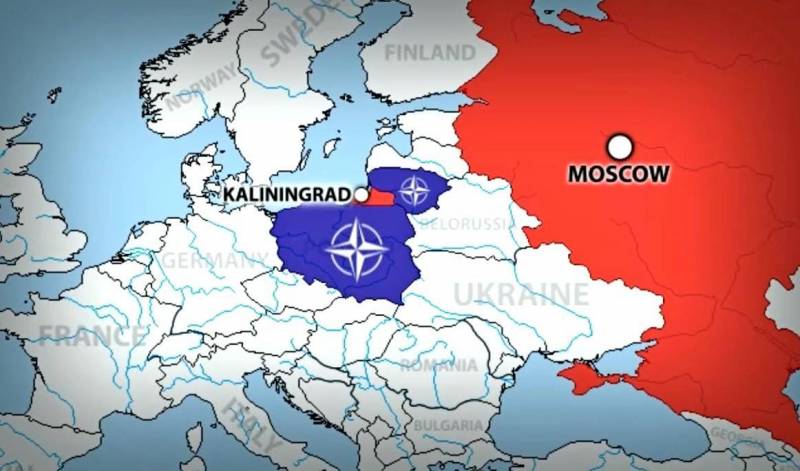 Lithuanian Railways has officially notified Kaliningrad Railways that from midnight on June 18 they will no longer allow transit trains with a number of goods subject to EU sanctions. This was announced on June 17 by the governor of the Kaliningrad region Anton Alikhanov.

From 40 to 50% of the range of goods that were transported between the Kaliningrad region and other regions of the Russian Federation, these are goods, including building materials (cement, metals), a number of other important both for construction and production, finished products that were exported from our territory [banned]

Well, it's begun. Lithuania officially begins blockade of the Kaliningrad region. It is clear that the ears of the European Union are sticking out behind all this. However, it is hardly a mistake to say that the initial initiative here came more from Vilnius than from Brussels. To be honest, the Lithuanian authorities in recent years have been behaving as if they have ... saves, like in a computer game, to which you can roll back if something goes wrong. At first, they openly got nasty to China by opening a representative office of Taiwan with a corresponding sign, after which they were abruptly excluded from the PRC customs system with all the consequences, including the paralysis of bilateral trade. Now the leadership of Lithuania is taking a much more risky step, trying to block the Russian region, disrupting its communication with the rest of the country. Although they themselves are connected with the European Union only by the 56-kilometer Suwalki corridor on the border with Poland.

In general, it is curious, but how is geography in the Baltics. What about Lithuania, of course, but what about Latvia and Estonia? Do the “wisest” Latvian and Estonian policythat the actions of Vilnius bring "under the monastery", including their country? Simply because of all the three Baltic republics, only Lithuania has a border with the rest of the EU. But Latvia and Estonia are adjacent to Belarus and Russia, and in the event of a change in the status quo of the Suwalki corridor, they will find themselves in, to put it mildly, a delicate situation. What is called, draw your own conclusions.

Of course, the temptation to strangle Kaliningrad from the Baltic republics and Poland is too great. Moreover, against the backdrop of anti-Russian hysteria in the EU, it has become much easier to get approval for this in Brussels. If earlier the old Western European countries - France and Germany, tried not to spoil relations with Russia once again and did not take the Russophobia of the Polish and Baltic authorities seriously, today, against the backdrop of sanctions, the latter suddenly felt themselves on the crest of a wave and began to point out to Paris and Berlin. Say, look, we warned you not to deal with Russia?

Is Lithuania provoking Russia? Undoubtedly. Do I need to succumb to provocations and respond to her in full right now? Of course not. AT this moment no.
It is clear that the courage of the Lithuanian leadership is primarily due to the powerful figure of the United States, hanging behind its back. And like a pocket dog, fearlessly yapping at a bear in the presence of its owner, the Lithuanian authorities feel extremely protected. Extremely misleading and dangerous delusion on their part.

The whole problem of the Baltic, and indeed other European Russophobes, is that the focus of attention of their master, the United States, is gradually shifting from Europe to Asia. There, where communist China has already managed to economically overtake capitalist America, which, of course, the latter does not like terribly. So the shield of NATO (read the United States), which all the small European countries so fearlessly provoking Russia rely on, may one day simply disappear. And if it seems to someone that this will not happen very soon, then he is seriously mistaken.

NATO is not forever, Russia's patience is not endless

The United States would leave the North Atlantic Alliance if Donald Trump managed to be re-elected to the post of American president. This was announced on June 18 by former US presidential candidate and former Secretary of State Hillary Clinton.

If Trump had won in 2020, he would have left NATO. I don't doubt it
Clinton said in an interview with the British edition of the Financial Times.

Of course, many may say that all this is just an internal political squabble and another stage of pouring slop on Trump. And everything would be so, if not for a number of factors. The first is Trump's public dissatisfaction with the underfunding of NATO by European countries more than once when he was president. In the fat years of the heyday of US economic power, the large costs of the North Atlantic Alliance were perceived by Washington as an accompanying expense. Today, the situation is beginning to change. Heap economic problems that fall on the United States, leads to the fact that in the high offices of the Washington Regional Committee, willy-nilly, they begin to think about whether the game is worth the candle? (By the way, it is by this logic that the United States has already managed to leave Afghanistan). With the United States' share of the global economy continuing to decline for years, the Alliance's funding is starting to look wasteful. Especially considering that 71% of NATO defense spending in 2020 fell on the shoulders of the United States.

At the same time, it is important to understand that despite the world's largest defense budget, the United States is perfectly able not to confuse "its sheep with the state." The entire European infrastructure of the Alliance is, suddenly, in Europe, and therefore most of the funds allocated for the maintenance of American military bases in the Old World end up in European, and not in American pockets. It was difficult for Trump, as a true capitalist, to understand. During the years of his presidency, the slogan “stop feeding the EU” never reached, but he still managed to shock the European burghers and force them to increase defense spending. Although it is clear that they did not particularly like the latter.

This is where the second factor that testifies to the fragility of the Alliance comes from - the statements of the French leader Emmanuel Macron that NATO was “brain dead”. France, as the most windy member of the Alliance, having managed to leave its military structure and enter back, has always been displeased with Anglo-Saxon domination. The historical experience of Anglo-French "friendship" worked out by generations cannot be dispelled in an instant. And even such an openly pro-American president as Macron, willy-nilly, had to say what other NATO members thought about, but were afraid to say. And after all, all this happened not at the time of the war, when the struggle for resources increases many times over, but in quite peacetime.

What conclusion can be drawn from all this? NATO is not eternal, and Russia's patience is not infinite. Lithuania should remember this. Today the Alliance is strong and powerful, but tomorrow it may not exist. Military alliances are falling apart, you know. The organization of the Warsaw Pact countries, which included the USSR together with Lithuania as a part, is a vivid example of this.

But Russia is near forever. And provoking it today, do not be surprised at the consequences tomorrow. And they, dear official Vilnius, will definitely be. Trying to strangle Kaliningrad with a blockade is, of course, audacious. The main thing is not to forget what happened to those who last dared to block the Russian city. Call Berlin, they will remind you there.
Reporterin Yandex News
Reporterin Yandex Zen
24 comments
Information
Dear reader, to leave comments on the publication, you must sign in.