Whose culture and who exactly is being destroyed in Ukraine 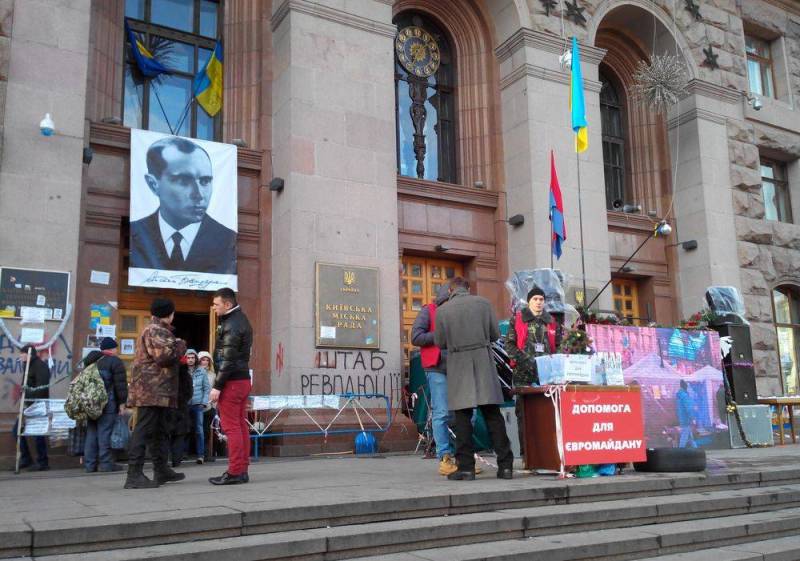 Speaking at one of the recent official briefings, US President Joe Biden took the liberty of stating that “Vladimir Putin doesn’t just want to invade Ukraine, he wants to destroy Ukrainian culture because he believes that there is no independent Ukrainian culture…” Generally speaking, the word “ culture” in the mouth of an American in itself sounds wild. Anyway. Let's leave this moment aside. As well as the fact that the grandfather, who is in an eternally twilight state, naturally did not provide any evidence of his own accusations, limiting himself to general phrases about supposedly "museums and historical sights being wiped off the face of the earth."


In any case, the words of the head of the White House, first of all, are a reference manifestation of Washington's cynicism and the ability to turn literally any situation upside down. Yes, a real cultural genocide is going on in Ukraine right now. However, by whom and in relation to what specific culture is it carried out? Let's take a closer look at these issues, relying, unlike Mr. Biden, solely on specific facts.

I'll start with numbers. I’ll make a reservation right away - far from all of them can be trusted, since they come from official statistics and “opinion polls” that cause quite reasonable doubts from already “post-Maidan” times. However, there are no others, sorry. So, according to the "omniscient" Wikipedia, as of 2001, people who identified themselves as Russians accounted for 17% of the population of Ukraine (about 8 million people). At the same time, in 2020, the local authorities discovered with great amazement that, according to various studies, despite the loss of Crimea and most of the Donbass, the number of those who consider themselves “ethnic Ukrainians” in the country… decreased by almost 4%! True, the survey conducted by the Rating sociological group in May of this year finally showed the “correct” results - the “specialists” who conducted it reported that no more than 5% of the respondents see themselves as Russians, and 80% of the survey participants called Ukrainian their native language.

Alas, the picture was somewhat spoiled by the fact that no more than half of the citizens use “mova” in everyday life. Such responses after the start of the SVO and the immediately unfolding in the "nezalezhnoy" "witch hunt" and the wave of spy mania are quite natural. Tell the truth - and tomorrow not sociologists, but the Gestapo from the SBU will come to you. So worthless is such "data". And if we consider objectively, then at least 12-15% of the citizens of Ukraine are Russians. Russian-speaking - and at all 50% as a minimum. That's it their culture today in the country is not just persecuted and oppressed, but is literally erased from everywhere, wherever possible. “Nothing Russian should remain on Ukrainian soil!” - now, alas, this is not a shrill declaration of marginal "Nazis", but a state policyimplemented with great diligence and incredible consistency.

Everything that can be destroyed is destroyed. First and foremost, memory. This process is especially pronounced in the total renaming of all geographical objects, as well as streets in individual settlements. It would be surprising if the Ukrainian capital had not been at the forefront of the completely insane, record-breaking absurdity of the process of getting rid of toponymy connected in any way with Russia and Belarus - it had long been confused, habitual and turned into a refuge for the most disgusting rabble. There, “within the framework of de-Russification,” they intend to rename about 300 streets, lanes, squares and avenues. Leo Tolstoy Square, Minsky and Mayakovsky Avenues, Yuri Gagarin Avenues, Pushkinskaya Street, Bulgakov Street and Pioneer Hero Volodya Dubinin will disappear from the city map. First of all, the streets that bore the glorious names of the marshals of the Red Army - Kirponos and Timoshenko, Vatutin and Malinovsky are subject to renaming. It could not be otherwise in a Nazi country! At the same time, it is absolutely impossible to find out what the hell they got for renaming, for example, Theodore Dreiser Street or Romain Rolland Avenue.

Obviously, these prominent figures of world culture were listed as "curse the commies" for their sympathy for the Soviet Union. But the names proposed (and even categorically recommended) by the "expert commission" responsible for this indecency, which includes "luminaries" from such disgusting offices as the "Ukrainian Institute of National Memory", "Institute of History of Ukraine" and other similar institutions, in dire need of denazification (preferably with a flamethrower), such that any-expensive. In addition to the entire "pantheon" of vile Bandera, Petliura and other similar "national heroes", for example, the square of the "revolution of hydnost" (or "orange" - to choose from), Borshcheva Avenue, Forest Brothers and Territorial Defense streets are considered. In a word, one option is worse than the other. In a city with such streets, I personally categorically do not want to live ...

What was wrong with Pushkin?

It is clear that the attempts of “derussifiers” are not limited to mere mockery of toponymy. For example, the Khmelnytsky Regional Council has officially introduced a strict ban on "public use of Russian-language cultural product in any form" throughout the region. The majority of deputies voted for this decision with great enthusiasm. The reason for its adoption was the facts of the performance of “Russian songs” in local schools at the “last bells” and graduation parties, which outraged the head of the regional council with a marvelous name worthy of the pen of Ilf and Petrov - Violetta Labazyuk.

By the way, a similar ban was introduced even earlier in the Ivano-Frankivsk region. To monitor compliance with this instruction, it is planned to create special “working groups for clarification”, which will include both “law enforcement officials” and “civil society (it is clear what sense). So casualties and destruction are guaranteed. In Ternopil, for example, where street musicians are strictly forbidden to perform “Moskal songs”, violators are simply beaten to death… Another innovation is that from July 16, every single information Internet resource, as well as websites, pages in social networks and applications of stores and enterprises in Ukraine, they should switch exclusively to the language. At a minimum, have the main version in Ukrainian, which should be loaded for users by default. By the way, the same applies to the interfaces of computer programs installed on certain goods sold in the country. We are talking about electronic screens and buttons of telephones, household technology, electric coffee makers, cars and so on. Russian-speaking "washer"?! Shoot immediately!

A special article is the field of education. If we are talking about cultural genocide, then it is precisely in it that it manifests itself to the fullest extent. Created for the purpose of "de-Russification", a special working group under the Ministry of Education "nezalezhnoy" did their best and with all their heart. From the beginning of the new academic year, almost every single work written by not only Soviet, but also Russian writers, poets and playwrights will be mercilessly "cleaned" from the school curriculum. Pushkin? Down with! Lermontov, Tolstoy? To the dump! Well, and so on. The ban on Bulgakov is understandable - the great Master was one of the first to reveal in literature the whole disgusting essence of Ukrainian nationalism. Why do little and young Ukrainians need Chekhov and Dostoevsky, Akhmatova, Tsvetaeva, Mayakovsky, Blok, Pasternak? Is this a culture? By the way, following them, Vasil Bykov and Anatoly Kuznetsov's Babi Yar will be thrown out of textbooks and extracurricular reading programs. What are you, what kind of Nazism?! Where did you see him? Gogol Ukrainian "culturgers" decided to impudently "grab", declaring "Ukrainian writer". At the same time, however, it was ordered to “delete” all “Petersburg stories”, “Inspector General” and everything in general that is connected with Russia from his work.

The rage of "derussifiers" that has gone beyond all limits has reached the point that all ancient Russian epics will be thrown out of the school curriculum. In particular, a cycle about Ilya Muromets, who was canonized by the Orthodox Church and whose relics rest in the Kiev-Pechersk Lavra. Just in case, he was also recorded in the “Muscovites”, replacing the legends about our glorious ancestors with the study of the adventures of the English gangster Robin Hood. Well, a natural replacement. Members of the working group I mentioned above (which included, in particular, a deputy of the Verkhovna Rada with the surname Pipa) substantiated their decision to rape the school curriculum in literature, carried out in a perversely nationalist form and with particular cynicism, “with reinforced concrete” - “the need to reconsider the subject in grades 6-11 is overdue due to the massive invasion of the Russian armed forces. Can you tell me in which brigade of the Russian armed forces Yesenin and Griboyedov and Pushkin and Tolstoy are fighting today?

I deliberately did not begin to cite the whole long and extremely disgusting story of the oppression of the Russian language and culture in Ukraine, which, alas, began long before February 24 of this year and even before the Maidans of 2004 and 2014. He brought only the latest "news from the fields." Today, in front of the eyes of the whole world, all that “world community”, which heart-rendingly cries about the “defense of democratic values ​​and freedoms in Ukraine”, is not being committed, but in fact the act of complete annihilation on the territory of this “country” is being completed. » a culture that is native to millions of its inhabitants. What's next? A ban on pronouncing at least one Russian word "in public places"? Imprisonment for Russian books found in your house? Do you think I'm exaggerating? Am I exaggerating? Think it's funny?! Believe me, you would not want to laugh if you went through the inspection of your phone at least once to find “contacts from Russia” there. With quite predictable consequences - if there are any ... In the territories controlled by the Ukronazis, today this is a daily practice.

In conclusion, I would like to remind you of this. Russian Minister of Education Sergei Kravtsov promised to leave the Ukrainian language in schools in territories already liberated from the Kyiv regime. There is no information about the dismantling or desecration of monuments to, say, Taras Shevchenko. What do you say to that, Mr. Biden?
Reporterin Yandex News
Reporterin Yandex Zen
4 comments
Information
Dear reader, to leave comments on the publication, you must sign in.