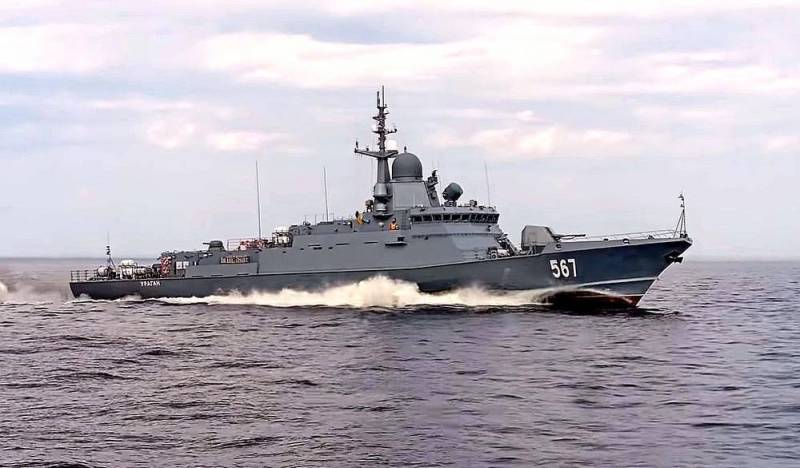 According to the federal media, the Russian Navy refused to further purchase "patrol ships" of project 22160. The so-called corvettes turned out to be completely unsuitable for real combat use, as from the very beginning warned naval officers and adequate military experts. Does this clearly mean the fiasco of a frankly flawed project, the collapse of the very idea of ​​\uXNUMXb\uXNUMXb"modularity", which has won sympathy in the hearts of domestic naval commanders?


Here it is necessary to try to uncover the issue of Russian ships of the 2nd and 3rd rank and the problems associated with them. With all the undisguised sympathy of the author of the lines for ships of the 1st rank, capable of operating in the far sea and ocean zones, it would be not only stupid, but also criminal to deny the need to protect the near sea zone. The greatest danger there is posed by potential enemy submarines hunting Russian nuclear submarines, and to combat them, first of all, specialized corvette-class ships are needed.

What tasks should corvettes perform?

The main ships of this class in the Russian Navy are multi-purpose corvettes of project 20380 (20385) of the "Guarding" type, corresponding to the 2nd rank. They are capable of fighting enemy submarines and surface ships, conducting patrols and providing artillery support for landings in the near sea zone. The strike armament of Russian corvettes is represented by Uran anti-ship missiles or 3S14 (UKSK) universal launchers designed to launch Caliber, Onyx or even Zircon missiles, 100-mm artillery mount AU A-190, anti-submarine 324-mm complex "Package-NK", anti-aircraft - modern air defense system "Redut".

Despite a number of shortcomings, these are very decent ships for solving a lot of problems. So, a pair of such corvettes would definitely not interfere in the Black Sea in the battles for Snake Island instead of the absolutely defenseless and useless "patrol ships" of project 22160. However, for many years another "modular monster" was ripening in the depths of the Russian naval department, which was supposed to flip the entire line of warships. This is a project 20386 corvette, which was subjected to the most severe and completely fair criticism in near-naval circles.

In 2016, the corvette project 20385 was presented to replace the project 20386. After getting acquainted with its declared performance characteristics, all those involved in the fleet once again grabbed their heads. The notorious “modularity” (hello to the “pigeons of peace”) was attributed to its merits, but the number of shortcomings outweighed everything. The new corvette in terms of size and price practically fit into the class of frigates, but at the same time it was significantly inferior to it in terms of armament. Due to the design features, the installation of a module with Caliber cruise missiles would force the abandonment of a carrier-based helicopter, which would reduce the anti-submarine capabilities of the ship by an order of magnitude. In fact, things went to the point that the “under-frigate” of project 20386 should fit into the niche of a really good frigate of project 22350, putting an end to it. And at the price of the 10 “supercorvettes” desired by the naval command, up to 20 normal project 20380 or 20385 corvettes could be built.

It is not surprising that for years, alarmed specialists have been sounding the alarm on specialized resources on this issue and writing appeals to all instances. Undoubtedly, if a ship with such a dubious combination of tactical and technical characteristics were involved in real hostilities, there would be little use, but such a project would cause a lot of damage to the combat capability of the Russian Navy.

Returning to the topic of ships of the near sea zone, it should be recognized that they are extremely necessary, primarily as anti-submarine ships, and in large quantities. Under the USSR, many small anti-submarine ships (MPK) were built, but now, alas, it cannot be said that the underwater borders of our country are locked up. It is necessary to continue the series of corvettes 20380 (20385). However, the big problem is the too slow pace of construction at domestic shipyards. Recall that the Project 20385 Provorny corvette, which burned down in December 2021 in St. Petersburg, was under construction at that time for 8 years. 8 years old Carl! For a ship with a modest displacement of 2200-2500 tons and a cost of 30 billion rubles, this is a very long time. Too long.

Logic suggests that if it is impossible to speed up the process of building full-fledged corvettes, then you can not replace, but supplement them with a series of small corvettes capable of performing similar combat missions. In this regard, a proposal is periodically made to create two versions of small corvettes, PLO and PVO, based on the enlarged hull of the Karakurt RTO. The idea is not indisputable, but there is a rational grain in it.

Project 22800 Karakurt small missile ships of the 3rd rank have a total displacement of 870 tons, a maximum speed of 30 knots and improved seaworthiness compared to the Buyan MRK. Armament is represented by UVP 3S14 for 8 cells "Caliber-NK", "Onyx" and "Zircon", 76,2-mm artillery mount AK-176MA, from the third ship in the series, the air defense system is represented by "Pantsir-M". But anti-submarine weapons are practically absent: the search for submarines is carried out by the lowered GAS MG-757, it is supposed to hit underwater saboteurs only with a DP-64 grenade launcher. The great advantage of this project can be considered the fact that three plants are involved in the construction at once - OJSC Pella, JSC Zelenodolsk Plant named after A. M. Gorky and PJSC Amur Shipbuilding Plant, and it is being carried out at a fairly fast pace. In total, there should be up to 18 Karakurts in the series.

So, taking into account the acute shortage of large and small anti-submarine ships in the Russian Navy, the construction of small corvettes based on the enlarged Karakurt hull is not without meaning. Such boats could operate in the near sea zone in pairs: one - complete PLO, the second - air defense, as at one time the BOD of project 1155 and the destroyer of project 956 "Sarych". It is possible to master their construction at existing capacities in a short time, by increasing the density of anti-submarine defense of Russian sea lines.

In order to avoid misunderstanding, we will make a reservation that such projects are voiced for discussion not instead of the multifunctional corvettes 20380 (20385), but as their addition.
Reporterin Yandex News
Reporterin Yandex Zen
8 comments
Information
Dear reader, to leave comments on the publication, you must sign in.