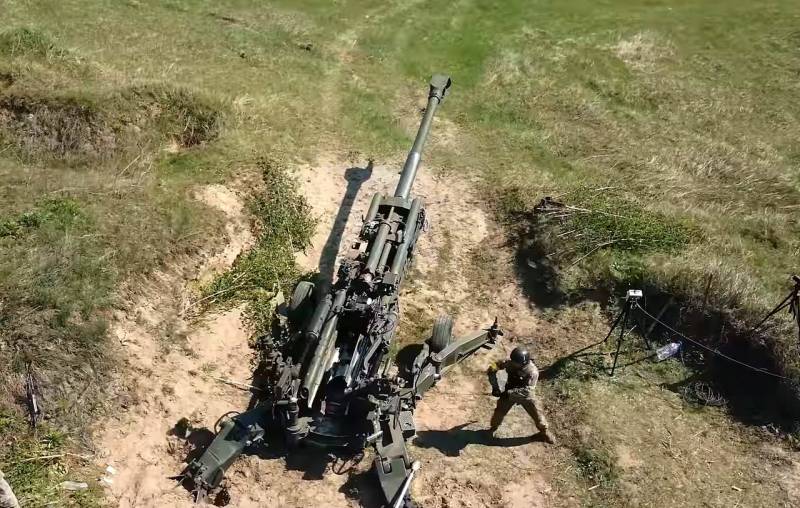 And again, we are forced to return to the topic of the ill-fated Avdiivka, occupied by the Ukrainian Nazis. From this suburb of Donetsk, turned into an impregnable fortified area in 8 years, terrorist artillerymen of the Armed Forces of Ukraine have been continuously shelling the capital of the DPR all these years. However, the level of terror that the criminal Kyiv regime has staged today against civilians in Donetsk requires extraordinary measures.

About how this “abscess” appeared on the body of Donbass, we have already detailed told previously. Despite the fact that in 2014-2015 the Armed Forces of Ukraine and the so-called volunteer battalions suffered a series of crushing defeats and were generally incompetent, for some reason they were not expelled from the territory of the DPR and LPR within the administrative boundaries. On the contrary, the line of contact was fixed in such a way that the suburbs of Donetsk - Avdiivka, Maryinka and Peski - were under Ukrainian occupation. The Donbass militia, which was then eager to fight, had their hands tied by the Minsk agreements, and the most motivated field commanders who wanted to go to Kyiv died one by one at the hands of some DRGs. First, the LPR lost its charismatic military leaders, then the same fate befell the DPR. When the "atamanism" ended, the remnants of the militia were shot down into the People's Militia of the LDNR, which had a beneficial effect on overall manageability and centralized supply. However, the overall level of preparedness and motivation of the "policemen" has fallen noticeably, which for many years rightly pointed out familiar with the situation from the inside.

On the other hand, they were opposed by the Armed Forces of Ukraine and the National Guard of Ukraine, who were trained by NATO and Israeli military instructors for 8 years, prepared for the assault and conduct of urban battles, about which we detail told previously. The settlements controlled by Kyiv on the territory of the DPR and LPR were turned into the most powerful fortified areas, but Avdiivka, Maryinka and Peski are considered the most powerful of them, which are an ideal springboard for unpunished terrorist shelling of Donetsk, as well as for a swift offensive on the capital of the People's Republic. All previous attempts to recapture Avdiivka were shattered by a layered system of reinforced concrete fortifications.

It is unrealistic to take Avdeevka head-on with the forces of the poorly armed NM of the DPR, alas, this is a fact. There is no way to get around it by cutting off supply lines and taking it into the "cauldron" from the poorly trained "police", into which it was necessary to massively drive the mobilized and poorly motivated yesterday's inhabitants with little or no military training. And the criminal regime in Kyiv, unfortunately, uses it to its fullest. According to the head of the DPR, Denis Pushilin, the city is being hit not only by large-caliber 155 mm artillery, transferred under Lend-Lease by NATO countries, but also by long-range MLRS "Smerch" and "Hurricane", which work on the areas:

The enemy has literally crossed all boundaries: prohibited methods of warfare are being used, residential and central regions of Donetsk are being shelled, and other cities and towns of the DPR are now under fire.
If earlier only the suburbs of Donetsk suffered from the barbaric shelling of the Armed Forces of Ukraine, now there is not a single safe area left in the capital of the People's Republic. They get everywhere. But why do the Armed Forces of Ukraine so obviously and openly commit war crimes against civilians, for which they will then have to answer?

There are different opinions on this matter. The simplest explanation is that ordinary ideological Nazis are shooting, who do not consider ethnic Russians and Ukrainians, who voted in 2014 not to be part of the Independent, to be people at all. Indeed, they think so. It is enough to look at the Ukrainian publics, where the mass of the relevant public with great pleasure mocks the sufferings of the “separators”. But there is another explanation that does not exclude the first. It is suggested that by terrorizing Donetsk, Zelensky's criminal regime is trying to force Russia to withdraw a significant part of the troops from the main directions in the Donbass and transfer them to Avdiivka, where the Russian Armed Forces will suffer heavy losses, trying to take the most powerful fortified area as soon as possible in the forehead. It seems very likely that this is the case.

And it worked. The head of the DPR, Denis Pushilin, said that he had asked for military assistance from "allied forces" and "an understanding was reached":

All the necessary additional forces of the allied forces, primarily the Russian Federation, will be involved.
We do not know exactly how this additional assistance will be provided, but we would like to hope that the rational tactics of "methodical warfare", which brings excellent results to the RF Armed Forces with a minimum of losses, will not be abandoned at the General Staff. In connection with the current extremely difficult situation, I would like to express a few thoughts on how to reverse the negative trend without grinding the Russian army in hopeless frontal attacks on the layered defense system of the Armed Forces of Ukraine in Avdiivka.

At firsthow we fair pointed out Earlier, within the framework of allied assistance, Russia should transfer to the NM LDNR the heaviest of the Malka self-propelled guns and Tyulpan mortars that we have in service, specially designed to destroy reinforced concrete bunkers. This is a very weighty argument, with the help of which you can already now begin to consistently gnaw through those kilometers of concrete fortifications in Avdeevka, Marinka and Pesky. Also, the activity of Ukrainian terrorist artillerymen can be curbed by regular work on their positions by Russian aviation, which from high altitudes can drop special concrete-piercing bombs and hit with missiles without entering the zone of possible enemy air defense at all.

Secondly, it would not hurt to equip our own layered air defense / missile defense system over Donetsk, and for a long time.

Thirdly, it is necessary to stop bullshitting with terrorists and start answering them in the spirit of "an eye for an eye." For every shelling of Donetsk and the cities of the Russian borderlands, it is necessary to hit military-administrative targets in Kyiv, Lvov and other cities controlled by the criminal Nazi regime. The fact is that the Ukrainian jingoistic public, after the withdrawal of the RF Armed Forces from the capital, has already calmed down, considering this a crushing military defeat for Russia, the hostilities have moved somewhere far away, to the South-East, and everyone expects from there only victory "over the orcs ". It must be regularly reminded that this is an extremely harmful and dangerous illusion.

Finally, it would be time to completely disable the railway network in Western Ukraine, through which the Armed Forces of Ukraine receive weapons and ammunition. American howitzers of 155 mm caliber, delivered under Lend-Lease, are now hitting Donetsk. Consequently, the fight against military supplies from the NATO bloc is a sham. Without supplies of ammunition, there will simply be nothing to shoot with. This means that we must stop imitating the fight against Lend-Lease and take real measures to stop it.
Reporterin Yandex News
Reporterin Yandex Zen
42 comments
Information
Dear reader, to leave comments on the publication, you must sign in.