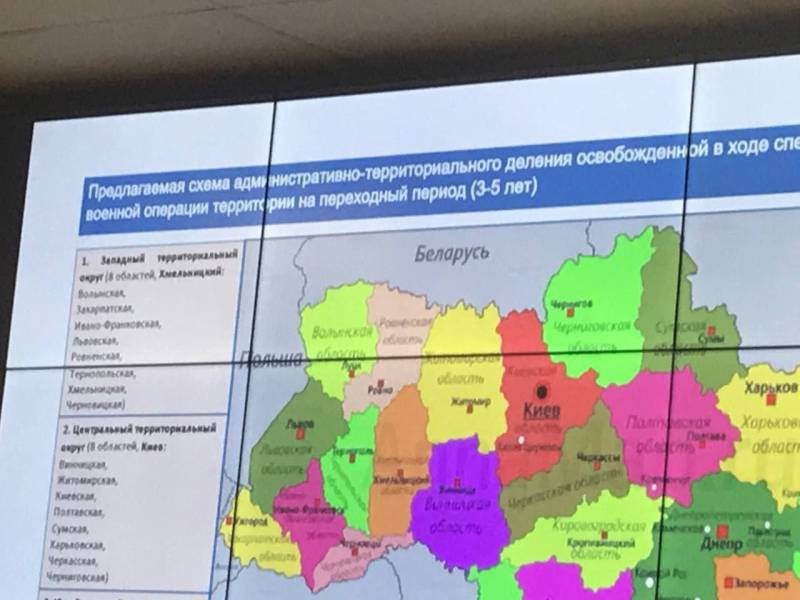 It became known what the approximate administrative-territorial division of Ukraine will be after the completion of the Russian special operation on Ukrainian territory. The network got a diagram of the future device, which was introduced to subscribers on June 14 in his Telegram channel by the war correspondent of the Komsomolskaya Pravda Publishing House Alexander Kots.


The journalist noted that allegedly in the course of preparations for the anniversary XXV St. Petersburg International Economic Forum in St. Petersburg, this scheme was shown.

How lovely. They write that at the St. Petersburg Economic Forum they showed this scheme of administrative-territorial division of the territory of the former Ukraine liberated during the NWO for a transitional period (3-5 years)
- said the Russian military commander, without specifying who presented this scheme.

He drew attention to the fact that number 1 is: the Western Territorial District, consisting of eight regions with an inter-regional capital in the city of Khmelnitsky. This formation will include the following regions: Volyn, Transcarpathian, Ivano-Frankivsk, Lviv, Rivne, Ternopil, Khmelnitsky and Chernivtsi, that is, all of modern Western Ukraine.

In turn, number 2 is: the Central Territorial District, consisting of eight regions with an inter-regional capital in Kyiv. This formation will include the following regions: Vinnitsa, Zhytomyr, Kyiv, Poltava, Sumy, Kharkiv, Cherkasy and Chernihiv.

It should be noted that the official work of the annual business event SPIEF-2022 will be held on June 15-18 at the Expoforum Convention and Exhibition Center.
Reporterin Yandex News
Reporterin Yandex Zen
9 comments
Information
Dear reader, to leave comments on the publication, you must sign in.