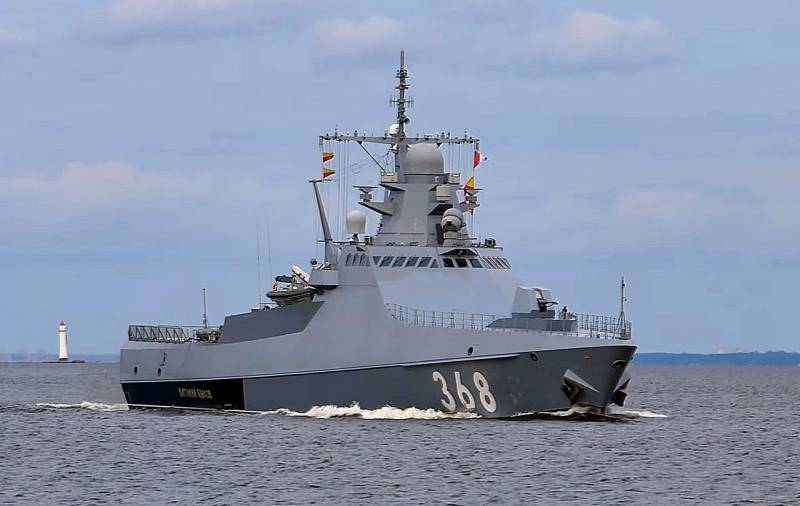 According to leading news agencies, the Russian Navy can acquire six air defense corvettes at once. The need of the Russian Navy for ships of this class does not raise the slightest doubt, which was clearly confirmed by real hostilities in the Black Sea, but how exactly the problem will be solved made naval officers and military experts grab their heads. What went wrong?


According to TASS, the newly appeared "air defense corvettes" will be sculpted from project 22160 patrol ships:

By the end of this year, the Black Sea corvettes of project 22160, taking into account the experience of participation in the special operation, will strengthen the ship's air defense system by installing the Tor-M2KM air defense system.
Photos appeared on the Web with the lead patrol ship of this series, Vasily Bykov, at the stern of which, right in the middle of the helipad, there was a bulky ground-based air defense system, secured with chains so as not to fall overboard. One can understand why this was done: an almost unarmed ship has to participate in real combat operations against the Armed Forces of Ukraine, which are armed with aircraft, manned and unmanned, long-range artillery and anti-ship missiles. The need for invention is cunning, and for Vasily Bykov this Tor, and for the supply ship Vsevolod Bobrov with the ground-based Pantsir-S1 air defense missile system installed directly on the deck, are the weapon of last chance.

But how did it happen that instead of the air defense and anti-aircraft defense corvettes that the Black Sea Fleet really needed, it included a whole series of incapacitated patrol ships, nicknamed by experts “pigeons of peace”?

The problem of piracy reached the international level in the 1s, when Somali pirates began to systematically rob merchant and passenger ships passing along the African coast. Russia also had to take part in eliminating this threat, which was forced to send several ships of the Baltic, Northern and Pacific fleets there - the Fearless TFR, the Admiral Panteleev BOD with escort ships, and even the Peter the Great TARK. This is to the question of whether the Russian Navy needs large ships of the XNUMXst rank or is it enough "mosquitoes" for all occasions.

Unfortunately, we chose the second path, which proved to be a dead end. In 2013, the Commander-in-Chief of the Russian Navy, Admiral Viktor Chirkov, visited the United States, was treated kindly by the host and admired the American idea of ​​"modular" littoral ships. Upon his return, a year later, he gave the green light to a series of six Project 22160 patrol ships, which was positioned as "modular". The cost of each is estimated at 6 billion, that is, a total of 36 billion was paid for them. This is the price of two full-fledged corvettes, which would now be so useful in the Black Sea, and in any other of the Russian fleets. What did the country get for this considerable money?

To begin with, it is worth referring to the international experience in the fight against piracy and see how this problem is solved in other, not great, land countries.

An "anti-piracy" ship must meet a number of requirements. Firstly, its size, contours and autonomy should allow you to get to the place of service in the far sea zone, since we are talking about the African coast, and operate in conditions of strong pitching and waves. Secondly, on its deck there should be at least two Ka-27PS / 29 helicopters capable of taking to the air at the same time, reconnaissance drones, as well as at least a couple of high-speed seagoing boats that each receive a special forces squad. Thirdly, we need a full-fledged infirmary to provide medical assistance to injured hostages, premises for their stay, as well as a prison for captured pirates.

So, countries that really face the problem of sea robbery use ships of a different class than our project 22160 to combat it. For example, Singapore uses Endurance-class landing ships with a displacement of 6500 tons. Malaysia converted bulk carriers of the Bunga Mas Lima type into floating bases for special forces. The former "mistress of the seas" Britain used the complex supply ship RFA Fort Victoria with a displacement of 31 tons for this purpose. The Americans use their numerous destroyers, the Chinese - frigates. What did the Russian Navy get to fight pirates, about which almost nothing has been heard about in recent years?

He received a series of six lightly armed and almost defenseless ships, originally designed for the needs of the FSB Coast Guard. All of its weapons are a universal 76-mm automatic gun AK-176MA, 2 heavy machine guns and 2 anti-sabotage grenade launchers. The air defense system is represented by 8 MANPADS "Igla-S" or "Verba", so to speak, the weapon of "last chance". There is no anti-submarine protection as such. Theoretically, 2 × 4 Kalibr-K modular missile systems with Kh-35 missiles or the Kalibr family can be installed on them. These are the very "modules" that inspired Admiral Chirkov so much, but in reality, not a single patrol ship is equipped with them yet. The travel speed is low, and small boats shake a lot during waves, which negatively affects the well-being of the crew, and also makes it difficult to use helicopters and UAVs during takeoff and landing. To all this, it is worth adding that project 22160 was built according to civil technology, both of its power plants are in the same room and can be disabled with a single hit.

And now these defenseless and weakly armed ships of the Black Sea Fleet have to take part in real hostilities against Ukraine, which is backed by all the military power of the NATO bloc. So, the lead ship of the series "Vasily Bykov" had a chance to take part in the confrontation with the Armed Forces of Ukraine for Snake Island. In the Ukrainian media, he was already “drowned” in absentia, but, fortunately, the information turned out to be fake. However, one should be aware that in the event of an air attack or a strike from the shore by anti-ship missiles, the project 22160 has no chance. Enough of one "Neptune", "Harpoon" or even more so the Norwegian rocket NSM.

Will the Tor-M2KM air defense system installed directly on the deck of Vasily Bykov help?

Alas, not a fact. The ammunition of this anti-aircraft complex is only a modest 8 missiles. This is about a minute of combat at best. At the same time, the big problem is that the air defense system, handicraftly mounted on the helipad, is not integrated into the ship’s unified control system and has radar detection means of a limited radius. In fact, "Tor-M2KM" on a patrol ship is purely for complacency, so as not to go on a combat mission with only MANPADS in hand. And 36 billion rubles were spent on this instead of a pair of full-fledged air defense and anti-aircraft defense corvettes, which would really come in handy in the Black Sea now!

It remains to figure out why the development of the Russian Navy has gone down such a flawed path that you have to handicraft "ersatz air defense corvettes", who is responsible for this and what to do next.
Reporterin Yandex News
Reporterin Yandex Zen
85 comments
Information
Dear reader, to leave comments on the publication, you must sign in.